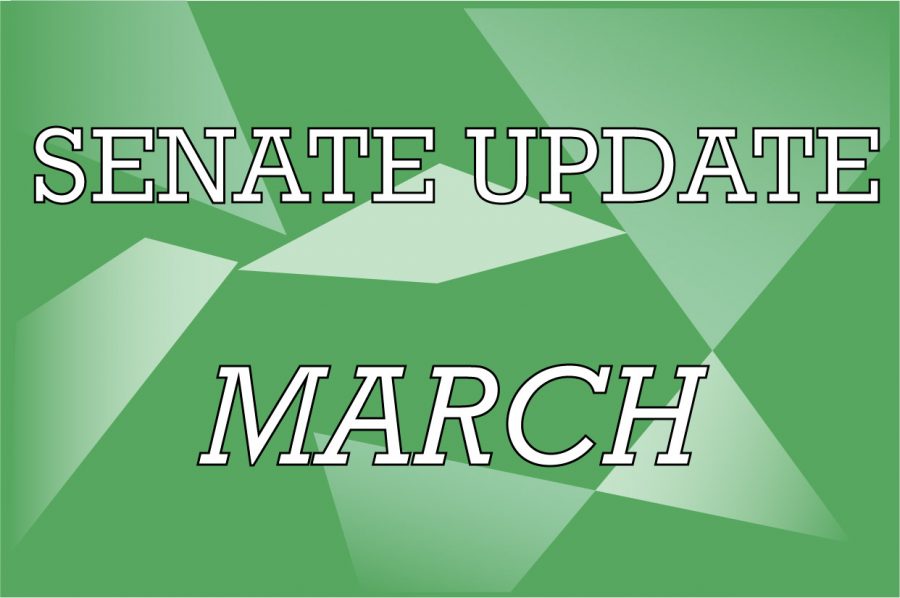 Seven new bills were presented to the Senate in March.

In March, MSMS senators continued to bring about improvements and changes to the handbook in the form of bills, resolutions and constitutional amendments ranging from adjusting the dress code to addressing the train that goes through campus. For the bills and resolutions passed in the senate, the MSMS administration will review and provide a verdict and reasoning why the bills are passed or failed.

The MSMS administration passed Senator Lyem Ningthou’s bill that would extend curfew time for those residing on campus, implementing a boundary after 10:30 p.m. that will be restricted to the sidewalk beside the library.

Senator Fiona Dawe proposed a bill that would make menstrual products available inside restrooms across the campus. The administration approved providing the products to one restroom each in the Shackleford, PAC and Hooper buildings.

The administration also reviewed and passed Senator Felicity Browning’s bill that would add penalties into the handbook for failing to remove clothing from laundry rooms promptly.

The Resolutions Reviewed by Administration

The administration reviewed Senator Wypyski’s resolution that would reduce the required number of work service days for Goen residents, stating that such problems and concerns should be discussed with the supervisors.

Senator Hayden Anderson presented a resolution that brought attention to granting more flexibility with performing work service duties due to the lack of time availability caused by the current block schedule. The MSMS administration stated that they will adjust this accordingly on a case-by-case basis.

The MSMS administration also reviewed a resolution by Senators Danielle Ryans and Neil Sanipara regarding ending room chats. The administration noted that room chats have ended after the end of the first semester, noting that the purpose of room chats was to build a sense of community within the student body.

In March, the MSMS Senate passed constitutional amendments, which are changes made to the SGA Constitution that do not require administrative approval.

Senator Jack Standard presented a bill that would update the information in the section regarding the Senate Ambassador position, which passed and would also update changes accordingly in the student handbook.

The MSMS Senate also passed Senator Evangalia Guigley’s bill that would allow other senators to present bills from absent senators during the meeting.

The Bills from March

Senator Cameron Wright presented a resolution that would lessen the penalties for failing to receive a temperature check on time, which the senators passed.

Senator Anderson also introduced a resolution that would adjust the time for temperature checks on Academic Support Days from 10 a.m. to 11 a.m. The resolution was passed for further review from the MSMS administration.

MSMS senators also passed Senator Vineeth Vanga’s resolution that would bring attention to the current unclear information regarding the times for temperature checks.

Senator Vanga also presented a bill that would implement a plan for allowing certain heaters in the dorms, which the senators also passed for further review.

Senator Amy Zhang introduced a resolution that will bring attention to the excessive amount of intercom announcements. Her bill was passed for further consideration from the administration.

Senator David Jelinek proposed a resolution that would encourage the MSMS administration to discuss with Columbus city officials to create a “quiet zone” due to the train disturbances caused on campus. The resolution was passed for further consideration from the school administration.

Senator Djedjos also introduced a resolution that would raise awareness to the “Class Time” email recently received from the Director of Student Affairs, which was passed for further review.

“Of the bills that passed, I believe Senator Ningthou’s resolution on shifting to previous curfew and Senator Dawe’s resolution on having menstrual products available within public bathrooms at MSMS were of particular importance for morale and to demonstrate MSMS’s progressive ideology respectively,” Rainer said. “Regarding the bills which were failed by the administration, they show two broader concerns of the student body: the disparity between Goen residents and Frazer residents, which was reflected in the unequal work service and clothing expectations, and the administration’s unwillingness to address this disparity of making Goen more equitable.”

Similarly, Senator Chloe Sharp shared her thoughts on the lack of response provided by the administration on Senator Djedjos’s resolution on dress code.

“The bill that I have the biggest problem with was the dress code bill presented by Senator Djedjos because when admin rejected that bill, they gave no reasoning for rejecting it — they just said no,” Sharp said. “That’s really frustrating to me because this is an issue that I know the student body cares about a lot, and it’s an issue that I care about a lot personally too. So the fact that they just rejected it without even telling us how we could revise the bill so it could be passed is really frustrating, especially since dress code is such a hot topic issue.”

Senator Zhang discussed the motive for writing a resolution regarding the disturbances caused by intercom announcements.

“The intercom has been disruptive for students, interrupting classes, study time, sleeping, college interviews and other activities, and we have received complaints about it from the student body,” Zhang said. “Other methods of contacting students for low-priority announcements could be used before resorting to an announcement, such as texting, calling, or emailing a student, so the resolution provided some suggestions about changes in the procedure for announcements.”

Senator Guigley also explained the reasoning behind writing his constitutional amendment, mentioning the conflicting schedules of many senators.

“There were always piles of bills and amendments that Senate needed to discuss and vote on, but we weren’t able to continue on when the senator who wrote the bill or amendment was absent,” Guigley said. “I know that the world of covid-19 is rough, and it pulls everyone every which way. By passing this amendment, senators can work with each other to make sure that their ideas are presented even if they have to miss meetings for a soccer game or any other event while also helping Senate get through bills quicker.”

MSMS Senate will continue to meet every Tuesday at 4:30 p.m., and all meetings are open to the student body.