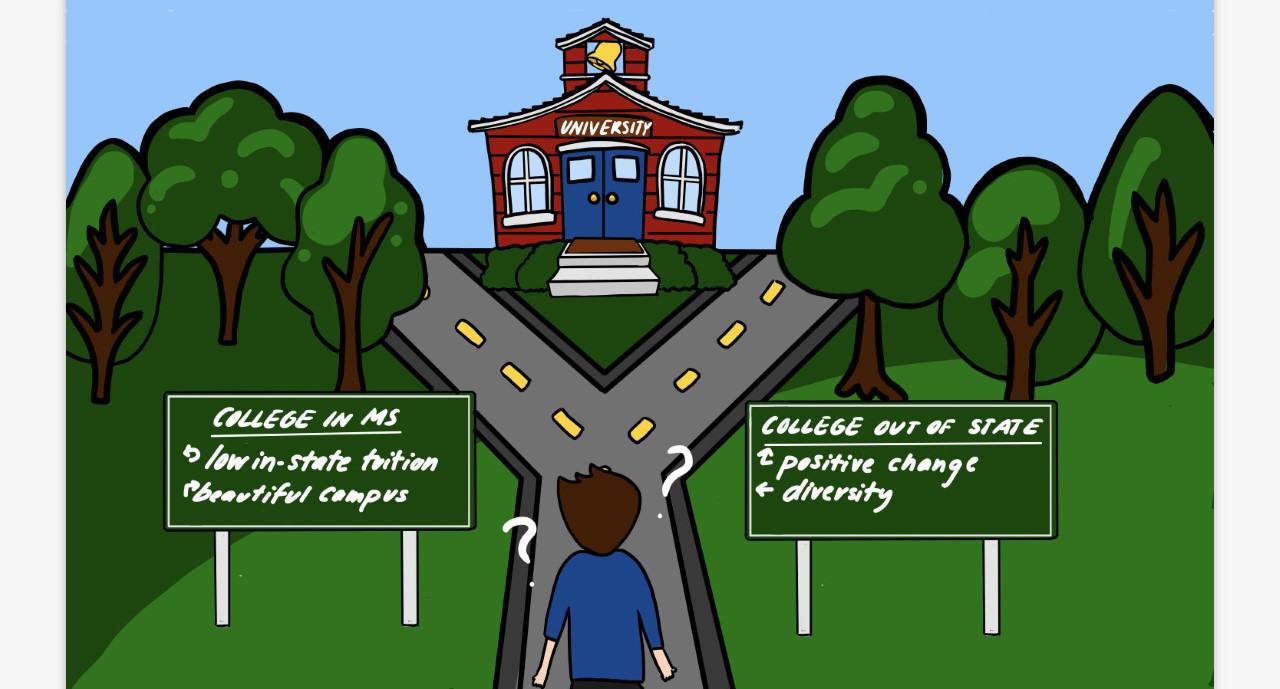 As MSMS students finish applying to schools all across the nation, many are debating about which one of those colleges or universities they will call their next home. Two MSMS students give their arguments on whether to pursue education in or outside Mississippi. (Elena Eaton)

As MSMS students finish applying to schools all across the nation, many are debating about which one of those colleges or universities they will call their next home. Two MSMS students give their arguments on whether to pursue education in or outside Mississippi.

Where should MSMS students go to college?

Many favor choosing an in-state education, especially when considering major factors such as tuition costs, mental health and the future beyond college.

Bowles: Why MSMS students should stay in-state for college

At MSMS, there is an absolutely crazy aura surrounding the most prestigious colleges in the U.S. I routinely hear people talking about spending hundreds of dollars to apply to the Ivy League schools even if they know they won’t get aid. Many students I know have ruined their mental health from stressing about these applications and financial aid. I have felt this pressure daily when my friends and peers talk about college applications.

But guess what? There is a very, very easy way to avoid this struggle: just stay in-state.

Firstly, the in-state schools in Mississippi are not bad colleges whatsoever. For instance, both Ole Miss and Mississippi State are ranked as an “A-” by Niche, and the pair are ranked 77 and 105 in top public universities by US News, just behind schools like Oklahoma, Cincinnati and the University of Texas at Dallas. In fact, they are outstanding universities that continually produce successful graduates, several of which work for our school.

Secondly, and likely most importantly, is the cost factor. For instance, both Ole Miss and Mississippi State have in-state tuition costs of less than $9,000, some of the lowest costs in the country. On the flip side, private schools like Harvard, Stanford and MIT all have tuition costs of over $50,000 a year. Other public schools many MSMS students apply to like the University of Texas at Austin and the University of Michigan have tuition costs right at or above $40,000 a year for out of state students.

Doing the simple math, these costs equate to $36,000 over a four year span for in-state schools. However, over that same time span, the tuition costs for the out-of-state schools come out to be over $200,000. It is true that there are many middle-tier schools with slightly lower tuition and some good merit scholarships, but many of these scholarships are limited and only gifted to a very low percentage of applicants. Waiting to see if you received a scholarship or even got selected for the process often adds stress into a student’s life, including mine.

Sure, these schools do give very generous aid, but many students’ parents earn too much to allow them to afford these schools, meaning they would have to take out loans to attend. My family earns enough to be excluded from meaningful aid, but that does not mean they can actually afford to pay out-of-state or private tuition costs. Currently, there are almost two trillion dollars owed in student debt, and this debt can follow graduates for a long, long time. Keep in mind, many MSMS students plan to attend graduate school, adding even more to the cost, so this fact makes in-state schools even more attractive.

Thirdly, MSMS students would be well-rewarded by staying in-state. Many MSMS students have exceptional grades and ACT scores and would receive significant scholarships by attending in-state universities. Students planning to attend colleges outside of Mississippi need to seriously ask themselves if a marginally to moderately better education is worth the additional costs.

Fourth, several in-state universities have beautiful campuses and great weather. Ole Miss is even ranked 13 for “Best College Campuses” by Niche. Attending these schools would also allow many students to stay closer to their families to facilitate their coming of age experience and be closer in case of a family emergency.

Lastly, as Mississippians, we need to contribute to our state. The state legislature gives our school over $4 million a year, and I think the very least we could do is give back to our state.

I know that Mississippi is not perfect, but every state has its flaws. Ultimately, our state needs educated people to fix it, and the first step is attending college here. Not only would it benefit you by lowering your cost, but it would also benefit the state itself.

Mississippi can be beautiful and amazing, but it needs our help to get there. Our state’s problems will never be fixed if all the solutions move away, and honestly, it doesn’t make sense to move away when it’s going to cost you $50,000 a year. I am very likely going to an in-state school, and I encourage you to spare your wallet and your mental health from the beating and come along too. You never know: you might just love it. 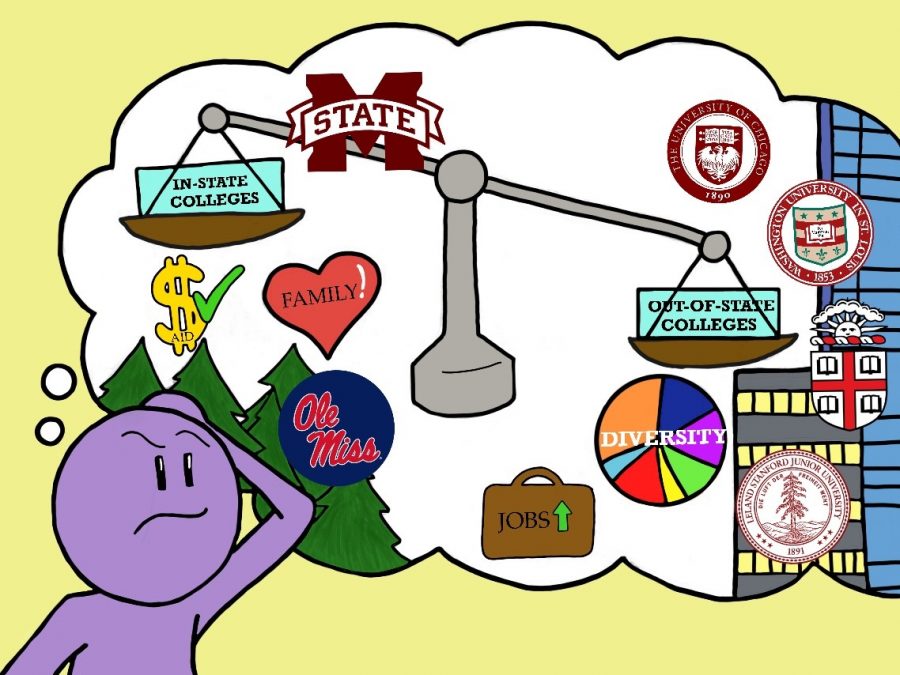 Out-of-state colleges are a popular choice among students who seek greater diversity in their community and a variety of educational and job opportunities.

McElhinney: Mississippi colleges aren’t for everyone

When MSMS students begin applying to college, we are encouraged to apply to at least one in-state school. We are also told that staying in Mississippi is a great way to give back to the community that raised us. Although attending a university in Mississippi has its benefits, out-of-state universities can offer many things that in-state colleges cannot.

The main benefit of going to college outside of Mississippi is change. Change in surroundings, change in culture and an overall change in lifestyle. As nice as it would be to go to college and already have a group of high school friends there with you, there’s something beautiful in entering a new environment knowing nobody and forcing yourself to open up and meet people. Before coming to MSMS, all my friends wanted to go to Mississippi State or Ole Miss, and I was looked down on for wanting to go out of state. For me, the prospect of a new community and new friends was exciting. I don’t want to attend a college where I already know 100 people there; to me, that’s more intimidating than knowing no one. Additionally, losing the ability to drive home to see family every weekend would force me to further gain independence, as well as some practice flying alone. Moreover, most colleges have better connections for future job opportunities, connections that Mississippi’s in-state universities may not have.

A huge factor for many students when choosing which colleges to apply to is diversity. Colleges like Ole Miss and Mississippi State University have much lower percentages of BIPOC students, having only 22% and 28%, respectively. However, many colleges outside of Mississippi‒ especially on the East and West coast‒ have much higher percentages. For example, Amherst College, a popular liberal arts college in Massachusetts, is much more culturally diverse, with 58% of its students being BIPOC, similar to Stanford University’s 63%. While not every college outside of Mississippi is diverse, there are many more options. Mississippi has 17 four-year universities; it is very likely that students that don’t fit in with the four or five main Mississippi colleges will prefer out-of-state institutions.

While diversity is a factor for many—or at least it should be—a main issue with out-of-state universities is the cost. In-state tuition is a major benefit of remaining in Mississippi, and Ole Miss and MSU offer hefty scholarships to students with good ACT scores. However, most private institutions offer great financial aid and scholarships. Student loans are daunting, but getting scholarships and grants can greatly lessen them. Work studies and ROTC are also viable options, as well as applying for the QuestBridge College Match Scholarship or becoming a National Merit Semifinalist. Obviously, it isn’t an option for everyone, but it should definitely be considered.

Of course, there are many factors that go into choosing the perfect college, and every student is different, but going to college in-state isn’t for everyone. MSMS students are always pressured to stay close to give back to Mississippi, but there are other ways to do that than going to an in-state school. I have always preferred urban settings, and Mississippi universities can’t offer that. I also prefer northern temperatures over the Mississippi heat, so staying here has never felt like a viable option for me. Although cost may be a major factor when I do choose a college, going out of state will be worth it because of the added experiences, cultures and opportunities I will get.