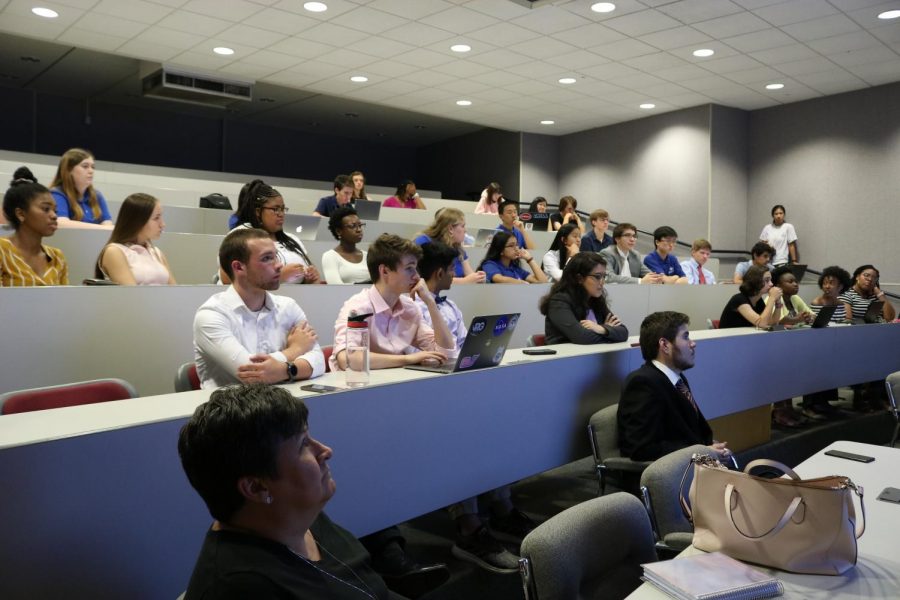 From costumes on holidays to extended lunch breaks, senators proposed a variety of bills this past quarter.

With 26 senators representing the student body, the MSMS Senate presents changes to the handbook in the form of bills. In order to pass, a bill needs a two-thirds majority vote from senators. Once passed, the bill is sent to Executive Director Dr. McConnell for evaluation. This month, senators passed five out of the six total bills presented.

The first official Senate meeting began with a joint bill from Senators Jack Standard and Lucas Rader. The bill was passed and served to reduce the regulations on computer monitors and televisions.

Senator Taylor Wypyski introduced the second bill of the school year. The bill’s purpose was to allow students to wear costumes on holidays and other notable days as it promotes Creativity and Community, two of the four MSMS Ideals. This bill was also passed for further review from Dr. McConnell.

Senator Neil Sanipara presented the next bill, which passed and pushed to establish a safe environment for LGBT+ students. As addressed in the bill, MSMS houses a diverse group of students, so Sanipara felt additions to the handbook are needed to promote an inclusive community within the school.

Due to the current pandemic, Senator Hayden Anderson presented a bill that would create a new section within the handbook that addresses rules for online instruction. Currently, there is no clear distinction between in-person and online school in the handbook, and this bill would ensure that that happens. Thus, Anderson’s bill was passed unanimously for review.

Senator Felicity Browning introduced a bill, originally from MSMS senior Meghan Curry, that would allow students to wear off-the-shoulder tops in school. Since the handbook does not specifically mention that the tops are prohibited, Browning proposed a clarification on this within the handbook—one that would allow such tops to be worn. The bill passed unanimously.

Senator Rader along with other senators introduced the final bill of the month. The bill would extend lunch time by ten minutes, to a total time of forty minutes, to allow students to have more time to eat and not disrupt the normal schedule by too much. This bill was also unanimously passed.

Second-year Senator Aaron Wan, who played a role in the extended lunch bill as a co-sponsor, strongly supported passing the bill.

“I really thought that the resolution we passed about increasing the lunch time was very important,” Wan said. “Considering the fact that we are sitting in front of our screens for so many hours per day, we deserve a longer break, especially teachers.”

“I thought that passing this bill was appropriate, especially for the situation of online learning that we are currently in,” Ningthou said. “Because a lot of in-person rules aren’t really applicable right now, making a section for virtual learning would be really helpful since not everyone will be on campus either way.”

Overall, the Senate has continued to propose bills and make an effort to improve students’ MSMS experience, despite being virtual. In October, the five bills that were previously passed will be reviewed by Dr. McConnell and the administration for a final decision.