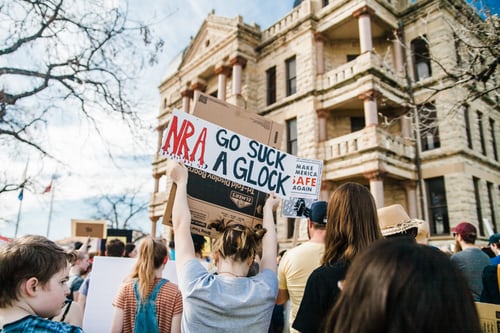 A marcher holds up a sign reading, “NRA go suck a glock.”

The problem with this, though, is that it’s mostly a uniquely American problem. Almost all adolescent firearm deaths, 90 percent, in developed countries occur in America.

Other countries suffer from one mass shooting, and they immediately change their legislation. After a mass shooting in New Zealand, their parliament voted 119-1 to change gun laws less than a month later. Yet, America has had 2,296 mass shootings, just since Sandy Hook in 2012. With this staggering number of tragedies, one would believe that we’d get the same legislature put into place to keep our citizens safe. Despite the need for gun control, all we get are “thoughts and prayers” from politicians. To be blunt, thoughts and prayers are getting us nowhere when policy and change is what we need and desire.

When you get down to the roots of the prevalence of mass shootings in America, a huge reason behind tragedy is the lack of strong gun laws. In a majority of states, private firearm sales without background checks are completely legal. This means that someone could sell a gun to a random person on Craigslist, without even getting a background check on the buyer. This is such a problematic practice, that a bill was proposed by the House of Representatives. The bill, H.R.8., would require background checks for all firearm sales, with a few exceptions to the law. In the midst of the Saugus High shooting this past week, Democratic senator Chris Murphy of Connecticut requested that the bill be passed by unanimous consent.

“We can’t go 24 hours without news of another mass shooting somewhere in America. My kids and millions’ others hide in corners of their classroom or in their bathrooms preparing for a mass shooting at their school, and this body does nothing about it,” Murphy said when presenting the bill to the Senate floor. The bill was inevitably blocked by the Republican-controlled Senate who, even right after a deadly mass shooting, don’t understand the positive effects of such a bill.

In fact, this whole scenario reinforced one fact of this epidemic: young people have to use their voices to fight against gun violence and a government that is doing nothing to help us. As Generation Lockdown, we have to open our eyes and realize that gun violence is destroying us. We need to fight for a safer America. We need to stand up to Congress and legislators who are doing nothing to help us. We, as young people, must recognize the power of our voices to push for better legislation.

The first step in this fight is recognition. We must recognize gun violence as it is: a national public health emergency. We must also recognize it in all of its forms: from rural suicides to intimate partner violence to urban youth violence to violence driven by white supremacist ideologies. We must recognize that it will take innovative, bold solutions to fix a problem that is so deeply rooted in American society.