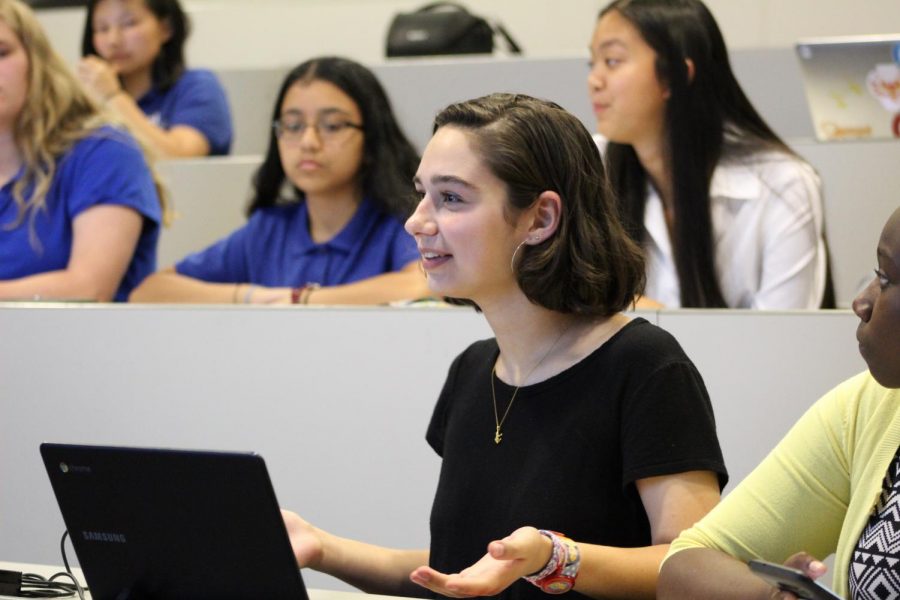 Senator Cecile Roberts expresses her concern for ambiguity on a bill.

The MSMS Senate alters the student handbook and allows the student body to voice their concerns to the administration. Once the Senate passes a bill, they send the bill to Executive Director Dr. Germain McConnell for review. They also passed 12 bills (and two resolutions). Dr. McConnell reviewed eight of the bills but only approved two.

Bills Passed (To be reviewed by Dr. McConnell)

Senator Ada Fulgham authored a bill to officially allow students to have “unconventional hair colors,” or rather, clarify whether the rule against them is still in effect.

Senator Camille Newman wrote a bill to allow facial and body piercings in the academic buildings, on field trips and at special events.

Senator Bertha Mireles wrote a resolution (different from a bill in that it does not amend the handbook) to bring attention to the lack of easily accessible accommodations for students with physical disabilities, specifically those requiring a wheelchair for mobility.

Senator Felicity Browning’s bill now allows students to order food during study hours, but the students are responsible for being at the door when the food arrives.

Dr. McConnell also approved Senator Nina Vo’s bill to allow juniors to be able to apply for the Extended privilege plan after the first nine weeks.

Senator Michael Lu’s bill to require work service supervisors to give feedback on work service grades was also altered. Now, work service is only a pass or fail grade, and it will no longer affect privilege plans.

Senator Faith Bradford’s bill to lessen the severity of the punishment for not logging out of one’s school email account on school computers was rejected by Dr. McConnell, who cited online security concerns.

Dr. McConnell justified the rejection of Former Senator Boatner Calhoun’s bill to lessen the severity of punishments for offenses in relation to “Lights Out” by allowing students to petition the hall director for additional time for auditing.

Senator Talle Wilson’s bill to reduce the consequences for level I violations was also rejected on the premise that students should correct their behavior after one warning.

“I heard complaints from many students that they got lower work service grades, and they were not able to get reasoning on why they got lower grades,” he said.

Other senators elaborated on their reasoning, such as Senator Mireles on the ultimate goal of her resolution.

“As MSMS continues to be a beacon for gifted students all over the state, it will be imperative to include students of all abilities in future classes, and hopefully, as new plans emerge, whether they be renovations or new buildings, MSMS will keep accessibility a priority,” she said.

In regards to the bills that were approved, some senators were not necessarily expecting their bill to get passed. Senator Vo shared her thoughts on why her bill passed.

“I was slightly surprised when it was passed by the administration, but I wrote the bill so that it would not be too drastic so that it would have the highest chance of approval,” she said.

Lastly, Dr. McConnell “will be discussing the concerns raised about residence life (in Senator David Heson’s resolution on student issues with residence life) with Ms. [LeAnn] Alexander in more detail this semester.” The MSMS Senate will continue to meet at 6 p.m. every Tuesday, and meetings are open to all MSMS students. Dr. McConnell is expected to review the bills from January in the near future.