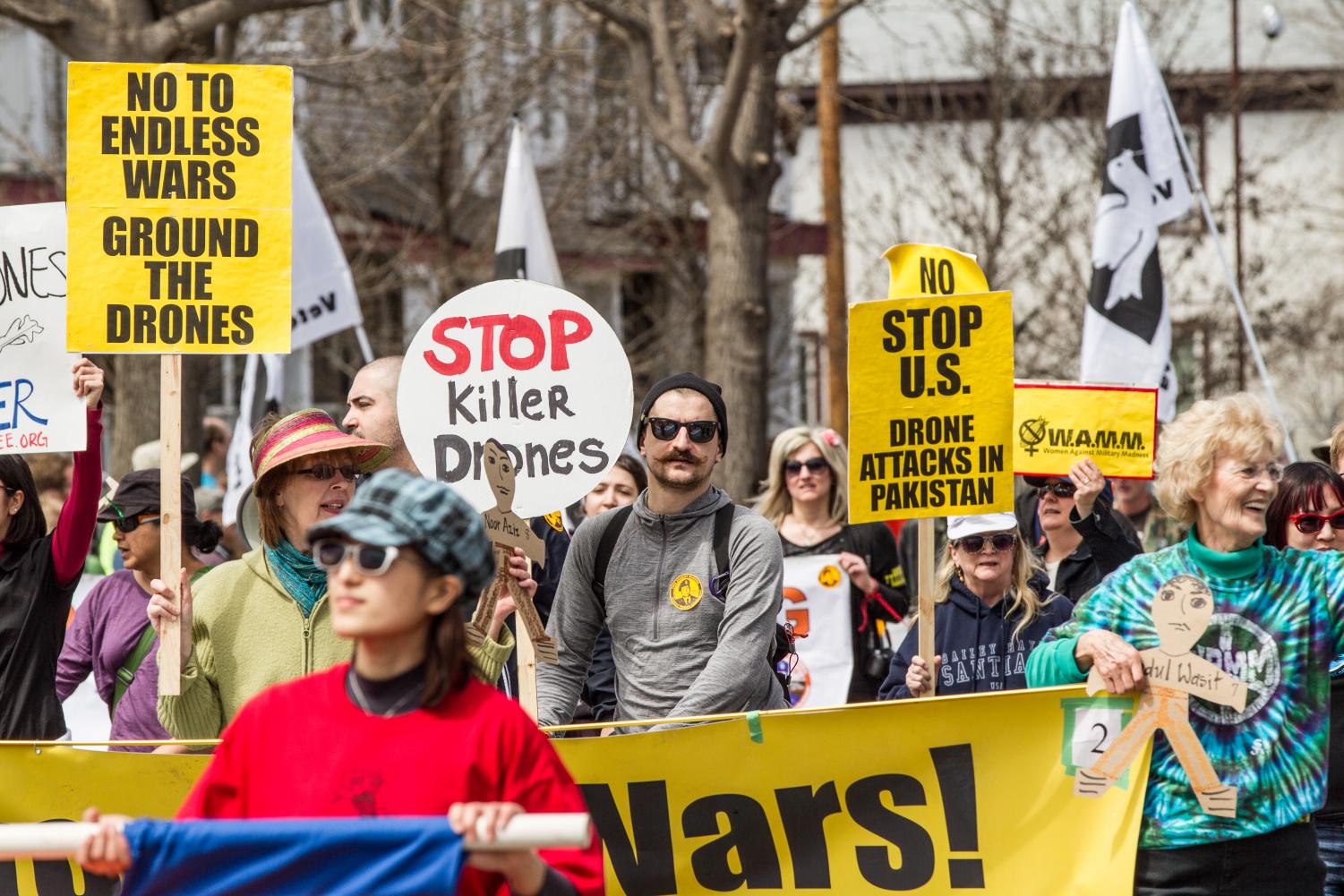 Many people took to the streets of Minneapolis in 2013 to protest against drone warfare in Pakistan. (Tony Webster from Portland, Oregon, United States [CC BY 2.0], via Wikimedia Commons)

Many people took to the streets of Minneapolis in 2013 to protest against drone warfare in Pakistan.

Bowles: Are US drone strikes the solution to terrorism or simply mass murder?

Imagine coming home one day to find your house destroyed and on fire. Police cars, fire trucks, and ambulances surround the scene. Your entire family was inside, and now the next time you see them, they will be in caskets.

I find it ironic how most of us here in the U.S. don’t typically worry about coming home to this scenery; however, this is a conventional fear for many innocent families in the Middle East– a fear augmented by our very own U.S. government.

Drone strikes are unreliable, unconstitutional and ultimately result in the murder of countless innocents. If the United States wants to see an end to terrorism in the Middle East, they need to end drone strikes as soon as possible.

On Sept. 19, a strike killed 30 pine nut farmers resting after a day of harvesting and injured 40 more. These were men simply wanting to relax after working hard all day, and instead, they were literally blown to pieces just because the U.S. suspected a terrorist was near them.

However, the American public quickly forgot because no one cares. Many Americans do not fully comprehend the full effect of drone strikes or understand the severity of the situation.

It is time for us to see that killing innocent bystanders does not help the reputation of our nation.”

In 2017 alone, there were over 120 drone strikes. Though only 41 alleged terrorists were targeted by drone strikes during the Obama administration, over 1,100 people were killed: 500 civilians and nine Americans.

Those senseless deaths reveal the big problem with drone strikes: information fed to our government about the whereabouts of suspected terrorists is often incomplete and unreliable. This means that we often send unmanned flying machines to countries thousands of miles away when we don’t actually know who will be killed.

For instance, in January 2015, an Obama-ordered airstrike killed two hostages, one American and one Italian. It took weeks to confirm their deaths because the U.S. didn’t know they were there. Obama commented on these deaths, saying, “those deaths will haunt us as long as we live,” but apologizing afterward does not wash the blood off his hands. In 2011, two American citizens, both teenagers, were killed.

Military officials admitted that they were unaware of the teenagers’ presence, and the targeted terrorist was not even present. People are murdered every day because the U.S. feels it has the authority to kill them on incomplete and unreliable information.

Those unintended casualties are not terrorists; they are almost always civilians who have no part in the terrorist organization, like the pine nut farmers this September. Back in January 2006, the U.S. sent drones to kill a suspected terrorist in Pakistan. Eight years later, he was still alive, but 76 children and 29 adults were not.

Many times, there have to be multiple strikes on one target, and even the “successful” strikes on 33 men during the Obama administration killed 947 unintended targets. These killings sparked graffiti depicting drone strikes and children asking why drones killed their family. It is time for us to see that killing innocent bystanders does not help the reputation of our nation.

Killing women and children only fuels the anti-Western, anti-U.S. stance of many ordinary people in the Middle East, creating more terrorists than it actually kills. Because of their collateral damage and only adding fuel to the hatred of America, drone strikes are doing much more harm than good.

These strikes show how the U.S. fancies itself above other nations. Violating the sovereignty of other nations sets a precedent for the United States to perform military action whenever and wherever it wants, and that is dangerous and will only lead to more conflict. The world is not our battlefield, and it is time we respect the right that other nations have to peace and self-reliance.

The Constitution guarantees “due process” for all citizens, which includes going through the U.S. judicial system, yet the nine Americans killed by drone strikes in the Middle East never received a trial. They only received a “legal review,” for which the defendant is not even present.

This “legal review” ultimately amounts to a few people looking over a person’s file and then sentencing them to death for possible affiliation with a terrorist group, leading many legal scholars to declare the strikes unconstitutional. Drone strikes are simply illegal when done on American citizens without providing them a trial.

Since Donald Trump took office in 2017, drone strikes have seen a massive resurgence. One of Congress’s main roles is to “educate the public” through debate, yet there is no debate on drone strikes at all. Our drone strikes kill innocent women and children thousands of miles away, yet our senators and representatives remain silent.

Ultimately, drone strikes are treated as a solution but only encourage the problem. Terrorists have said they started killing after being spurred by drone strikes, and the strikes have only fueled anti-American sentiment in the Muslim world.

The President often does not know who exactly will be killed, yet signs off on the strikes anyway. The strikes kill hundreds of civilians living peaceful lives. Before the strikes even launch, American citizens are being cheated of their Constitutional right to due process under the law, and worst of all, Congress has said, is saying and will say nothing.

Using drone strikes is a short-term tactic that only addresses the surface of terrorism and militancy and will never fix the causes of such ideologies, only encourage them. Terrorists are not just evil people who commit evil acts; they have beliefs and reasons for them. Terrorists’ voices that profess the need for local control of government and condemn foreign invasion are only amplified by drone strikes.

Drone strikes do not kill their beliefs, concerns or grievances. Instead, they bring legitimacy and credibility to their ideas and sway public opinion in their favor. Drone strikes may kill terrorists, but they only make their ideas more powerful.

If we truly want to end the conflict in the Middle East, we would focus on a more diplomatic approach with much less violence and killing. Many of the tribal groups targeted by drone strikes are tired of government corruption, foreign interference and lack of basic services. The way to address these conflicts is by encouraging cooperation, reconciliation and meaningful dialogue between these groups and their governments–not killing them with drone strikes.

Drone strikes are only increasing the legitimacy of terrorists’ ideals, and as long as they continue, the threat of terrorism on America will never cease.