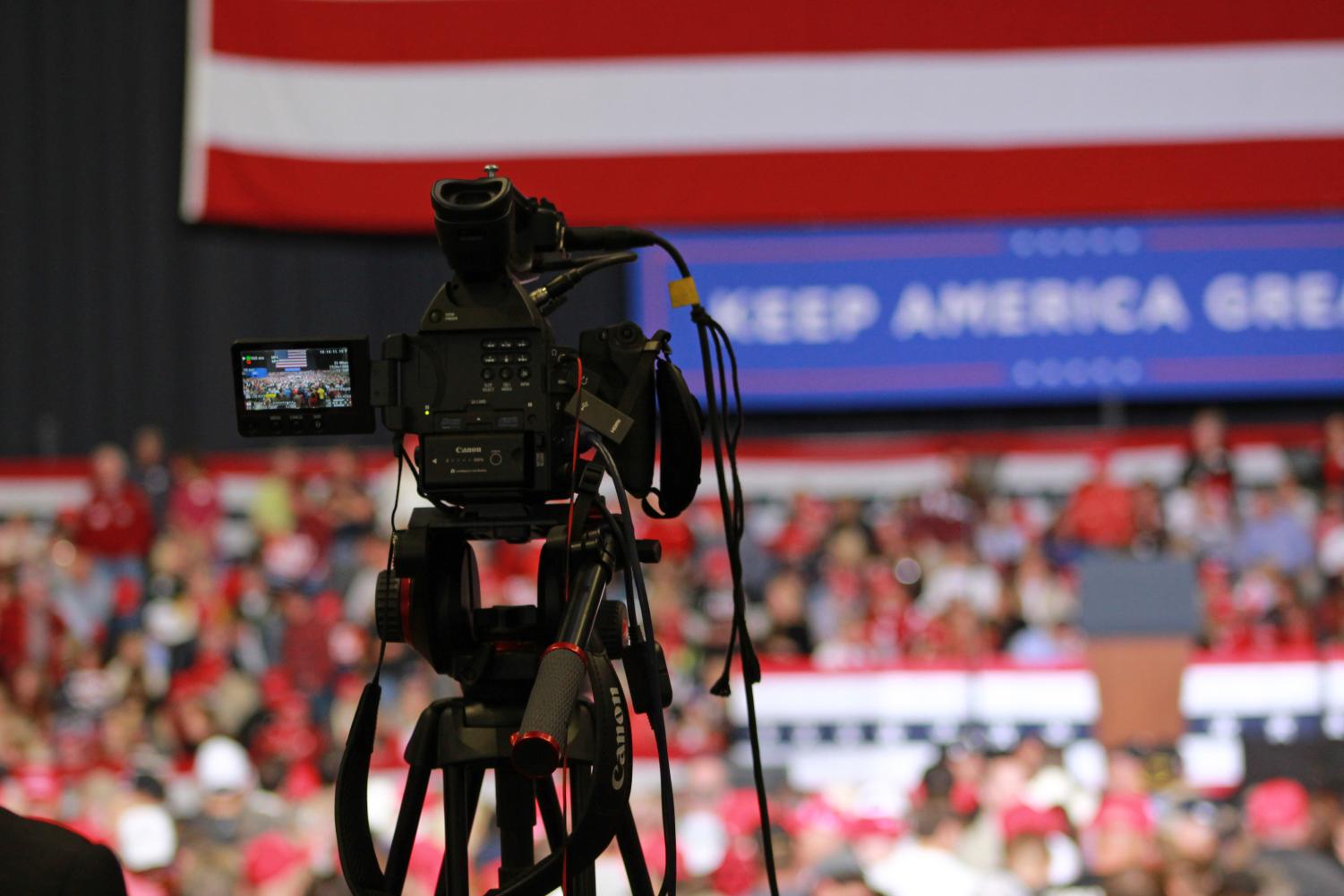 The press arrived hours before the rally began, setting up all their equipment. (Gina Nguyen)

The press arrived hours before the rally began, setting up all their equipment.

Photo essay: We got booed at a Trump rally… again

At this age, Friday nights are known to be spent at football games, at parties or for some, at home in your bed to finally catch up on all the sleep you lost that week. But, for over 10,000 people, myself included, last Friday night was spent with the President. That’s right, the President of the United States, Donald J. Trump, in the flesh.

Most people don’t ever see a president in their lifetime. But I’ve seen Trump twice now, and frankly, I’ve only become more baffled by what he has to say.

As I was scouting around for an open space with the best view of the podium, I paid more attention to where reporters had their cameras set up. I’ve been asked to move before because I was in someone’s shot, and it kinda intimidated me. But this time, I felt more welcomed. Other reporters made conversation with me and moved out of the way without me asking when I was taking photos.

Trump was scheduled to speak at 7 o’clock, but while he was off visiting a local elementary school group, the audience became more and more eager for his arrival. I was quite amused at the sight of the crowd getting louder and raising all their phones up each time a song slowed down and grew quiet. When the next song came on, though, sighs of disappoint filled the room as everyone went back to what they were doing before.

After hearing iconic bops from The Village People, Queen and The Jackson 5, Lee Greenwood’s “God Bless the USA” blared through the speakers as he finally took the stage. I don’t know how often he walks out to this song, but it’s often enough for me to associate it with him. Clearly, he’s “proud to be an American.”

Less than 10 minutes at the podium, and Trump was already firing shots at the media and “fake news.” If I thought his comments last year about how the press took up valuable space where his supporters could’ve been standing were uncalled for, man, did this year take me by surprise. Apparently, we “engineered the Russia hoax,” “the Mueller witch hunt” and the “phony” impeachment. At least he didn’t come for “The Vision” like he did CNN because wow, now that was uncalled for. They did fact check him though–they weren’t even live-streaming the rally to begin with.

Now, when I first heard about this rally, I was under the impression this was a Tate Reeves rally. When speculations started spreading across the news that Trump would be there, I was thinking, okay, so now it will be really big. When I got there, it hit me that this wasn’t a Reeves rally–it was a Keep America Great rally that was part of his presidential re-election campaign. Seems to me like Reeves only got attention because Election Day was just a few days out.

When Reeves took the stage, finally, I expected more than a 3-minute spiel about how “Mississippi is Donald J. Trump country” and that “Jim Hood is standing with the radical liberals.”

Throughout all this, I glanced around to see how the audience was reacting to their words, and I saw a boy–he must be about 10 years old–sitting on someone’s shoulders and carrying a “Keep America Great” sign. Each time the media was called out, he turned, eyebrows furrowed and everything, to aggressively boo at us. They start young, don’t they?

At times, I would put my camera down and quickly look through the photos I’ve captured. Even though I never thought I’d be at a place like that, I couldn’t help but smile to myself. For a long time, I thought photography would only ever be a hobby, but it was in times like this that I could see myself taking it further.

It wasn’t just the photography though. Looking around at all the reporters, I watched in awe. Even looking over at Davan while he was taking photos, I really appreciated how dedicated journalists are, including student journalists. Many of the people there came all the way from D.C. to cover this rally.

While Trump was talking, I honestly only expected Reeves and maybe Governor Phil Bryant to be there as well, but I was a little surprised when Hyde-Smith came out and even more so when Trump introduced every other Republican candidate running for state office. I looked at the other editors with a look that read whaaaaat?! Of course, I was too far away to see any of them, but with my camera, there they were. I could see Delbert Hosemann and Lynn Fitch smiling up at Trump.

When Hyde-Smith took the stage, she took all her energy up there with her. She may have only been up there for a barely a minute, but she didn’t waste a second.

By the end of the rally, I wasn’t really sure if he had left anyone thinking about the things he said. It seems like for the most part, people who already supported him showed up, and those who didn’t support him, well, didn’t show up. Seeing the crowd erupt in cheers every time Trump talked about how well we as a state and country are doing and how his plans are steering America in the right direction certainly made me think. Between this and the several interviews we had, I wonder if people as a whole are educated enough about everything. Of course, I don’t expect people to know everything, but it can be hard to fathom how divided we’ve become.

Trump ended the rally by reassuring the people we will “Make America Great Again,” but I left the rally hoping his words weren’t just mere words, hoping maybe our country can, in fact, change for the better.