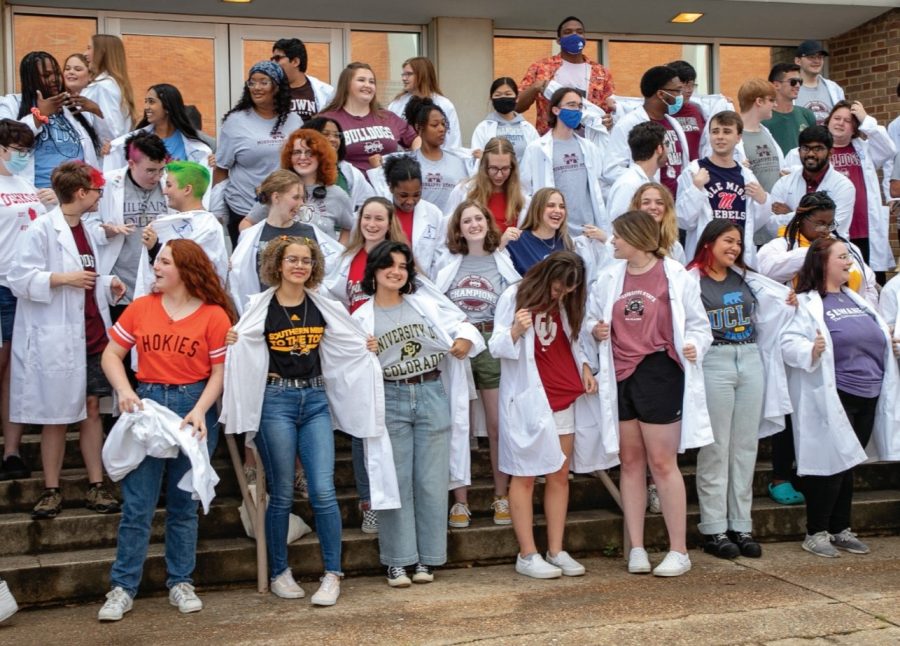 This year's seniors had many pieces of heartfelt advice to leave juniors as they depart for college, as well as some crazy confessions to make.

Editor’s note: All information displayed was collected by The Vision staff through Microsoft forms sent to seniors. Confessions and Advice were anonymously submitted by seniors and copied verbatim to this article. Wills and Aspirations contain names of students who wish to leave some part of their MSMS legacy to a junior and what the senior aspires for in the future, respectively.

I told on a student in AP chem for cheating and then two kids got level 3s. Oops.
You know how things would just randomly appear and disappear around campus? Yeah that was me. Ever found something that was super out of place? That was probably my doing. Ever felt like you were going crazy for setting something down and then immediately losing it? Sorry about that.
I only flipped a chair ;).
I think 85% of my sign-outs are lies <3. Eventually, I just stopped signing out.
These past two years have been amazing, I wouldn’t trade them for anything. But I would trade out some of the people I had to experience them with.
One time two friends and I signed out like we were going to Walmart and drove to Tuscaloosa to go to the mall and get Five Guys during a thunderstorm.
Earlier this year, two friends and I signed out to like four different places around Columbus and instead just drove to Tuscaloosa. We looked around at the University of Alabama’s campus, got cookies at the mall, and got fries from Five Guys. It was a great time and we made it back to campus with no one the wiser.
It’s been two years and I still can’t tell the McGee’s apart…
I should have never let the previous class talk me into writing that 50 page fanfiction about what happens in Frazer after hours just for a few dollars and spare change. That’s how I messed up my wrist for the rest of my life. 30 pages in one night is still impressive.
Tbh, out of all of my classmates, only a third are real genuine people.
I have stolen multiple rolls of toilet paper from Frazer bathrooms and taken them back to my dorm room.
I may or may not have broken into an abandoned gym on campus and stole a 13+ year old Hawaiian punch and took a sip after many other gross individuals during COVID times. There may or may not be mold in that bottle now.
I peed outside of a fourth floor window past midnight multiple times.
The abandoned buildings were cool before they got closed.
I was the one who made the hallways smell like burnt popcorn :).
I don’t know if admin is a bunch of fools or if they just don’t care enough to deal with us or enforce things more strictly. But, I enjoyed MSMS way more when I stopped caring about the restrictions and just did my own thing.
I found two blender bottles on two separate occasions and ignored the emails asking if anyone had seen them. I also made the @bestnbrightcrushes instagram account.
I dropped food on the rot floor #sorrytrina.

Do whatever you want to do. Don’t let other people or social norms hold you back. If you want gummy worms but you don’t have anywhere to hold them, shove them in your pockets. Don’t let society stop you.
Don’t lose yourself in the stress. Don’t engage in activities with the motivation that “this will help me get into a good school” or “this will look so good on my resume.” Engage in activities and take classes that fulfill you while you actively participate in them–ones where you don’t have to wait for some pay-off.
If you have a YouTube channel, do not tell your friends. Do not ask people their phone numbers after they reject you. They will say none of your business. If you ask how you can contact them. They will say that you can’t.
If you’re going to commit sign out fraud, check the weather conditions first.
Just go to sleep. Staying up to do work isn’t worth it. Also, go outside—I guarantee doing your work in the warm sun is a million times better than doing it under fluorescents. At least open your blinds in the morning.
Put your trash in your closet for room check.
It’s okay to talk to the teachers. Just don’t go telling them about how you were forced to kiss a corpse when you were six… learned that the hard way.
PLEASE don’t join any group chats before school starts! Even more, just wait until like October lol. Also, I know it’s cringe but please never stop being yourself, and stay true to your morals, vibes, and everything else!!! You are so COOL and you have to embrace that <3
Make sure to keep enough toilet paper in stock.
You guys probably should participate in as many field trips as possible. I missed a lot of them and now I regret it.
Colleges don’t care about how smart you are. They care about how you take advantage of opportunities. So, making the most out of your MSMS experience will show colleges that you will take advantages of their offers.
Find out who you can and can’t trust sooner rather than later.
Always remember you’re never alone – no matter what. Seriously, I know it seems like a lot of students are smarter than you, but someone understands you and you’ll never struggle alone.
You don’t have to try too hard in APC Mech or E&M to pass. Rely on anything else but class material if planning to take the AP exam. Privilege plans don’t matter, just leave and no one will notice.
Only go in the sandwich line if Courtney is working #courtneyappreciation #weloveyoucourtney #sandwichking.

I, Tucker Jaudon, will Dyllon Martin and Isaac Riggins the objects I have obtained throughout my two years here. To Karlin I leave my hopes and dreams or at least what is left of them.
I, Amy Zhang, will “your mom” jokes (willed to me by Nina Vo) to Mandy Sun, who is more well-versed in them than I am.
I, Raeed Kabir, will to Dia Kher and Aaron Sharp the terrible privilege of taking juniors under your wing. Buy them many chicken nuggets and carrots. To Claire Ellison, I leave my attention span.
I, Audrey Paige Robinson, leave my beloved Drama Club and Shack auditorium to Kylie Reed. My sarcasm and inability to write when I desperately need to will go to Ben Tabor. I request my nightly cup of milk and life ambitions to be split between Andra Dusin and Mariah Bailey.
I, Nicholas Djedjos, will Richard Zheng my cafeteria birthday singing and hopes he uses it to make more people smile awkwardly. I will Aaron Sharp my soccer skills (not that he needs them) and “that was fun” comments.
I, Jay Snodgrass, will to Addie White Vladimir the Purple Tiger; to Lexi Holdiness, the legacy of the Northwestern journalism lanyard and good luck for the paper; and to Kylie Reed, what’s left of my mental stability and an open invitation to all MSU theater productions I’m in. Lots of love to all the juniors and good luck for next year!
I, Stephanie Ressel, will to anyone brave or worthy enough to find it, a pen on first-floor Goen lobby for when you forget a pen to sign out. Take care of it. To Claire Ellison, I will the dead plant in H207, and to Sephora Poteau the responsibility of watering it. To Nathané George, I will my grey raincoat from 1st quarter for they probably haven’t given it back yet. Finally to Jay DeOchoa, I leave you with my remarkable looks and incredible bone structure. Please use it for good!
I, Zaria Cooper, will to Hangila Ceesay a rock that has been passed down to me from my senior Marlie Sturgis. It’s a BIG deal to be the caretaker of this gem, but I know you’ll do well! To James, Veer, and Phoenix, I will you all the best vibes for your senior year.
I, Taylor Wypyski, will to Cali Orman my boot in case she needs it next year. As well as being team mom of Blue Waves Goen Soccer.
Kevin Liu: To Andrew Liu. Though we’re not related, you made me feel what having a brother is like. I would like for you to continue to put a smile on others. Even during hard times with college apps, hard classes, and other dramas going on, fight through it and continue to be a happy boy!
I, Hannah Franklin, will the holiday tree that has been the light in our dark room (Mardi Gras beads not included), Gregory, to the admired Lauren Varner. To Blair Diffrient, I will Derald, the one duck that was reliable my senior year.
I, Regan Carroll, will to Dia Kher the quality of oversharing (aka how we became friends). To Lexi Holdiness, I leave behind the ability to never be on campus (“Your presence is a blessing to the classroom”).

Tucker Jaudon: As a kid I never really knew what I wanted to do, it didn’t really matter as long as it’s cool. I guess nothing much really changed, I still don’t really know what I want to do or who I want to work for, it doesn’t really matter so long as I get paid.
Raeed Kabir: When I was younger, I felt obligated to shotgun my education–I wanted to get an M.D.-Ph.D. Since then, I’ve realized that life is not a horse-race to “success,” whatever that may be. I intend to embrace nonlinearity, teach here and there, learn for the sake of learning, and arrive at my final destination, whenever that may be.
Audrey Robinson: When I was younger I wanted to be an architect. Then one day I woke up and realized that I am the worst artist I’ve ever met. I will now be pursuing theatrical lighting design, as it requires no ability to draw.
Nicholas Djedjos: When I was younger, I wanted to make my parents proud. Now, I still want to make them proud.
Alan Meng: When I was younger, I wanted to keep memories in case I get famous so that I can share with future fans. Now, I want to be on the second page of google.
Jay Snodgrass: When I was about three, I wanted to be a painter–I wanted to paint houses. Now, I’m going to be an architect. I guess the fascination with houses stuck around!
Stephanie Ressel: I’ve always wanted to be an astronaut and I never really grew out of that love for space. My dream is to be an Aerospace Engineer or Astrophysicist… or marry rich, settle down at 30, and go off-grid in the Rockies, telling the time from the constellations alone.
Amelia Pope: When I was in middle school I was convinced I was going to be a physicist. Then I learned that physics is hard, and I suck at math. Being a lawyer it is!
Zaria Cooper: When I was younger I wanted to become everything. Whether that was a teacher, a lawyer, or a spy, I just knew I wanted to help people. Now, I want to become a neurosurgeon, speaker, author, and actress, so yeah… not quite what my younger self was thinking lol.
Kevin Liu: Before: cure cancer. Now: make drugs.
Regan Carroll: Growing up, I dreamed of living in New York City. As an eighteen year old, I still have this dream, and I am hoping to accomplish this goal within the next ten years.