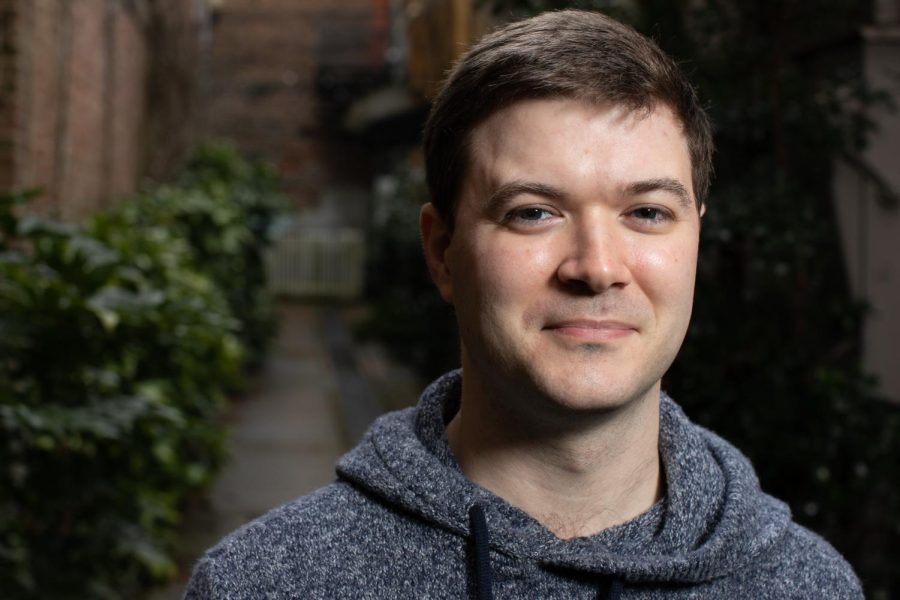 As the spring semester enters its second month, MSMS alumnus and English teacher Thomas Richardson sees dates of readings and Southern Voices deadlines on the horizon.

While he values and champions education, Richardson did not originally envision he’d teach high school, return to MSMS to teach or release a debut poetry collection.

“I don’t know that I ever knew what I was going to do. When I was a student at MSMS, I don’t think I even imagined I would be in Mississippi, let alone back at MSMS, when I grew older,” Richardson said. “It’s not that I had anything against Mississippi; it’s just not where my sights were.”

Despite what Richardson imagined as a young scholar, he chose to stay in state and attend Millsaps College, requiring exploration to settle on a major. Although Richardson intended to study political science and enjoyed English classes, he thought the campaigns were too nasty and wasn’t interested in some of the classes required for an English major.

By majoring in religious studies, Richardson was choosing what seemed to be the most interdisciplinary option. During his first master’s program, he continued to explore, but majoring in theological studies at Vanderbilt University felt natural. Ultimately, it wasn’t until Richardson decided to be a teacher that he returned to Mississippi.

“I thought that if any place needed teachers, it would be Mississippi,” said Richardson. “It wasn’t until midway through my time at [New Hope High School] that I thought MSMS might be a possibility, but I didn’t know when; there used to be four English teachers.”

After one of the teachers stepped down from his position, the spot was never filled. Eventually, he was employed as adjunct faculty teaching Journalism I and II in the evenings.

“It was fortuitous in some ways that the journalism position even opened,” Richardson said. “A year before the position was made available, I resurrected the New Hope school newspaper that had been defunct for 15 years or so. Then I was given a journalism class with the role of producing the paper. So, I got my feet wet with that; I got comfortable with that.”

After the Commercial Dispatch wrote an article on how Richardson and his colleagues had resurrected the school’s newspaper, Richardson received a call from former Director of Academic Affairs, Kelly Brown, about the journalism position. Since he was already working nearby at New Hope High School, he was open to adding evening journalism classes to his schedule.

“That got my foot in the door,” Richardson said. “I was the Vision advisor for five years, and I’m pretty bummed that my teaching load doesn’t allow me to do that anymore. It was such a rewarding experience, almost like coaching an athletic team: a cluster of people, who in the pre-COVID-19 days, were always in the Vision office, in 106.

“It was an all-year-long grind. It was fun to watch it evolve; it took on a different personality every year depending on who the editors were,” he added. “That was kind of my goal: While I reviewed and approved the articles that went out, I didn’t want to feel like I was in their way.”

In Richardson’s time advising the Vision, bonds formed amongst each of the members due to the unwavering frequency of meetings hosted and articles created. His experience advising Southern Voices cannot quite compare, but he said he still feels lucky to work with the young writers whose interests are so wide-ranging and who thus produce such impactful pieces.

Richardson was not the only one who took notice of the impactful nature of the Southern Voices students’ pieces; he and his students’ talents were recognized by the judges of the Mississippi Scholastic Press Association. Several MSMS students were recognized as best of MS in a variety of genres, and due to the guidance he offered them, Richardson was named 2021 Adviser of the Year.

Now in his third year as a full-time English teacher at MSMS, Richardson teaches an array of university and elective literature classes. Outside of the classroom, he does readings and signings for his debut poetry collection How to Read. Containing relatable humorous poems concerning childhood, teaching, parenthood and existentialism, the first anniversary of the release of Richardson’s How to Read is soon approaching.