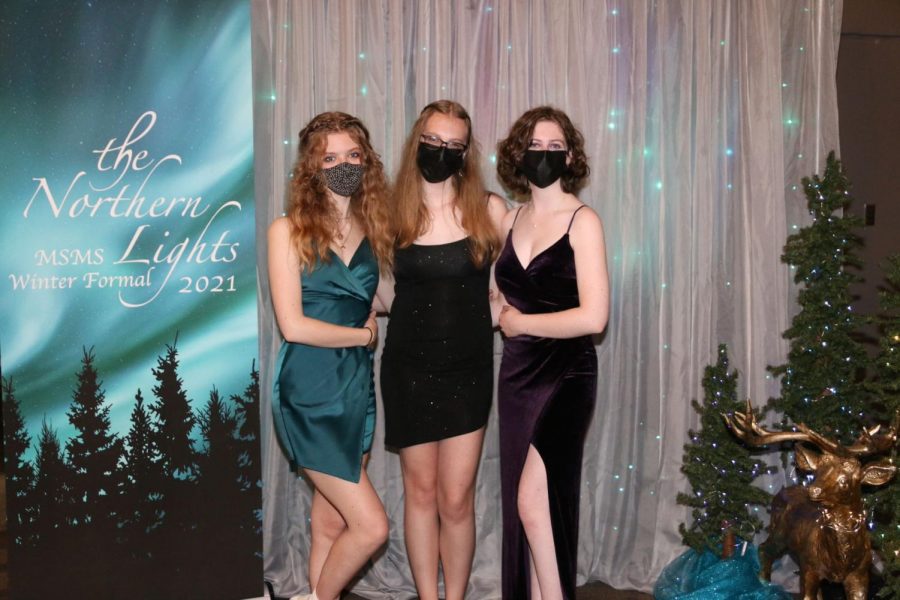 As the first semester of school comes to a close, students took the time to wind down Saturday Dec. 4 at Winter Formal. Students put on their best attire to attend the beloved MSMS tradition, which was canceled last year due to COVID-19. Because of the year-long hiatus, students held high expectations for this year’s northern lights-themed dance.

Music played by the DJ ranged from melodic hip-hop, top-40 pop songs, R&B and even some Indian music that guaranteed a fun time on the dance floor.

The creation of the Winter Formal committee and help from PLUS (Parents Lending United Support) allowed for the event to be executed gorgeously, with a great selection of decorations and food. The committee was formed in late October, and since then, they have held weekly meetings dedicated to organizing winter formal. Students designed tickets, decorated the venue and gathered supplies to put together the best experience possible for students.

Junior Maurisha Arnold, a member of the Winter Formal Committee, said the committee did a lot to create a nice outcome.

“It took a lot of effort to set up the decorations around the dance floor, especially hand-crafting the paper snowflakes. Thankfully, the result was very satisfying,” Arnold said.

Junior Towery McNeil said he admired the effort put into the event, despite the sweltering temperatures in the auditorium.

“Overall, it exceeded my expectations. The venue was really well decorated and it was actually just a fun experience with all my friends being there,” McNeil said. “But, it was ridiculously hot upstairs. Other than that, they did really well in everything. PLUS did a great job with the catering and all that.”

Junior Sophia Williams said the energy around the dance floor during Winter Formal was spirited.

“I felt great. It was crazy, it was litty, it was bussing. It was really fun, exciting and invigorating,” Williams said. “I really thought that the execution was absolutely beautiful. Honestly, I expected a nerd school dance, but we definitely defied the stereotype that night.”

Junior Mandy Sun said the photographs taken at the event did not disappoint.

“I had a lot of friends there, so I got to hang out with people,” Sun said. “The photography was also really good, that was one of the best things. Dr. Stevens took good pictures, they all turned out really well. Plus, the fact they came out the next day was really good.”

“I was shocked to see my name on the ballot. When they announced that I won, I was very surprised. It was a very exciting experience,” Liu said. “Overall, winter formal was a blast! I really enjoyed hanging out with everyone and taking pictures with my friends.”