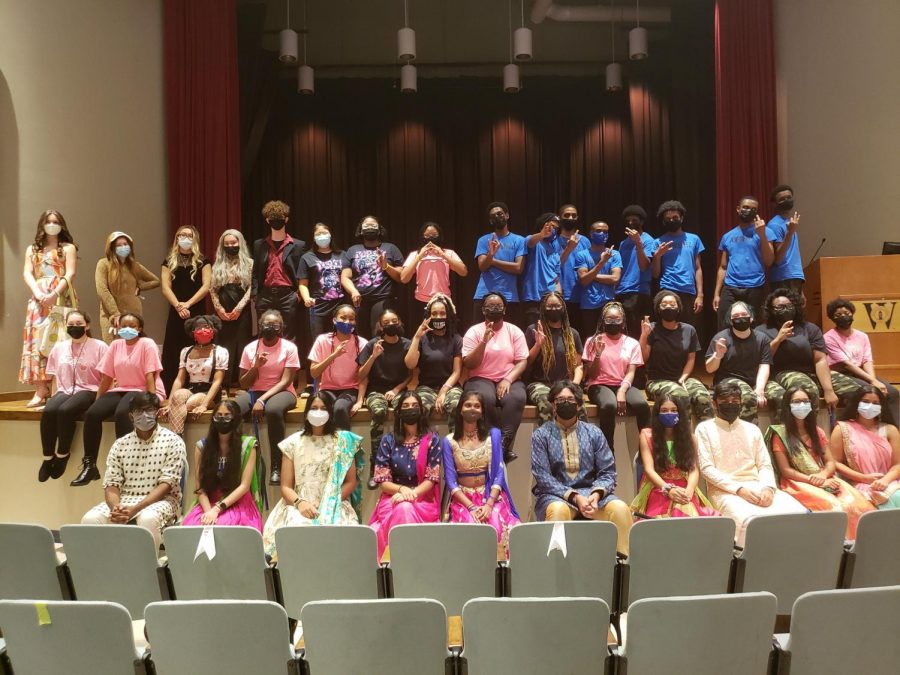 Members of the Blu Diamondz, Blu Knightz, MSMS Fashion Board, and Naach participate in a showcase for Breast Cancer awareness.

The MSMS community gathered in Nissan Auditorium to raise awareness for breast cancer through the Stomp Out Breast Cancer Step Showcase on Oct. 30. Several MSMS clubs displayed their talents for the event, proving there’s no energy like MSMS energy.

The show was hosted by LaToya Bledsoe and Chris Larry, who each kept the event lively between every act. To kick off the night, the pair started with introductions and breast cancer facts. The Fashion Board then took the stage to present a pink-out fashion walk as the first act.

“It showcased the talent here at MSMS and the diversity that’s so present. There were so many different styles that were shown, and I liked seeing the creativity people had,” junior Maurisha Arnold said.

The Fashion Board, sponsored by Bledsoe, set the energy for the entire show. It was followed by MSMS’s NAACH club. NAACH is one of the cultural dance clubs at MSMS.

“I had two favorite parts,” Larry said. “One was NAACH. I had never seen that style or culture of dance in person. Seeing them perform and just their technique and style of dance so it was really interesting to see. The other was playing the character on ‘Saw’ [the Blu Knightz step routine].”

“I had a fun time there. Most of the nerves went away as soon as we got on the stage and it was just really fun,” Blu Knightz captain Anthom Ahanonu said.

Although many students said they greatly enjoyed the Blu Knightz’s themed performance, the Blu Diamondz were also a fan favorite.

“Blu Diamondz made the show. They were by far my favorite performance just because of how hype they got the crowd. You could feel everyone cheering them on and the energy they had was riveting,” junior Hilldana Tibebu said.

For the last performance of the night, the Fashion Board made its epic return. With more club members and creativity, the Board closed the show with a runway-style walk to Michael Jackson’s “Thriller.”

“I thought the Fashion Board ending was cool since it was sort of a surprise. It wasn’t mentioned in any advertisement and it allowed students who may not be in the step teams to still participate in the function,” junior Nora Courtney said.

Bledsoe said the event showcased both the talents of MSMS students and the caring community they create.

“I really enjoyed being able to be in a normal environment and having a normal event even when still in the midst of COVID,” Bledsoe said. “My favorite part was just seeing the diversity amongst the students and the love and support they had for everybody on the stage.”