Coldplay’s ‘Music of the Spheres’ is an intergalactic trek 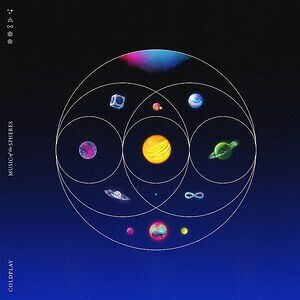 Coldplay incorporates the energy and spirit of space in their latest album.

Coldplay is back at it again. On Oct. 15, the English sensation released their ninth studio album Music of the Spheres. The album is twelve tracks long and nothing less than a intergalactical trek to new music styles.

It’s been a short hiatus since the band’s last album Everyday Life in 2019. Still in the pre-COVID era, Everyday Life contained lighter tones, but still conveyed the same oddly deep feelings that Coldplay is known for. Contrasting with Everyday Life, Music of the Spheres plays in an entirely new arena.

Several elements in the album relate to what COVID-19 brought to the world. There’s this new earthy, connected feel that’s almost somber at times. It’s like an apology or moment of silence no one knew we needed.

The opening and interlude tracks create a breakage from the actual songs in the album. They’re like little pauses that seem to symbolize the quiet moments in the chaos. The entire album centers around a space theme. Literally, the album’s title Music of the Spheres is representative of music of the planets or universe.

From start to finish, the album is a journey. The slow beginning leading into the heavy-hearted middle finishing at an accomplished ending all ties together the cosmic feel.

But it wouldn’t be a Coldplay album without the electric piano. The musical elements of the album remind everyone of traditional Coldplay. In songs like “Higher Power” and “Humankind,” the digitally produced sounds are prevalent and recognizable.

Of course there are the slower tracks like “Let Somebody go,” which features Selena Gomez. It’s in these songs where the always-recognizable voice of Coldplay’s lead singer, Chris Martin, is valued. Martin’s voice is contemporary and unique which contributes an edge to every song. Specifically in Music of the Spheres, it’s almost like a grounding factor to the songs. Since the overall vibe is spacy and above the clouds, the simple constant of his vocals is grounding.

The diversity of the album doesn’t stop at the inclusion of interludes, slow songs and digital sounds. There’s also hit singles that are incorporated like “My Universe” featuring the global K-Pop band BTS. This particular song brings the entire feel of universal connections together. Not only by the title of the song, but also by the way it utilizes global connections.

There’s no doubt the album has its highs and lows. The interludes do become monotonous, but they still add texture to the tracklist. The constant mix of the different flavors included make the album relatively fun to listen to because you never know what’s coming next.