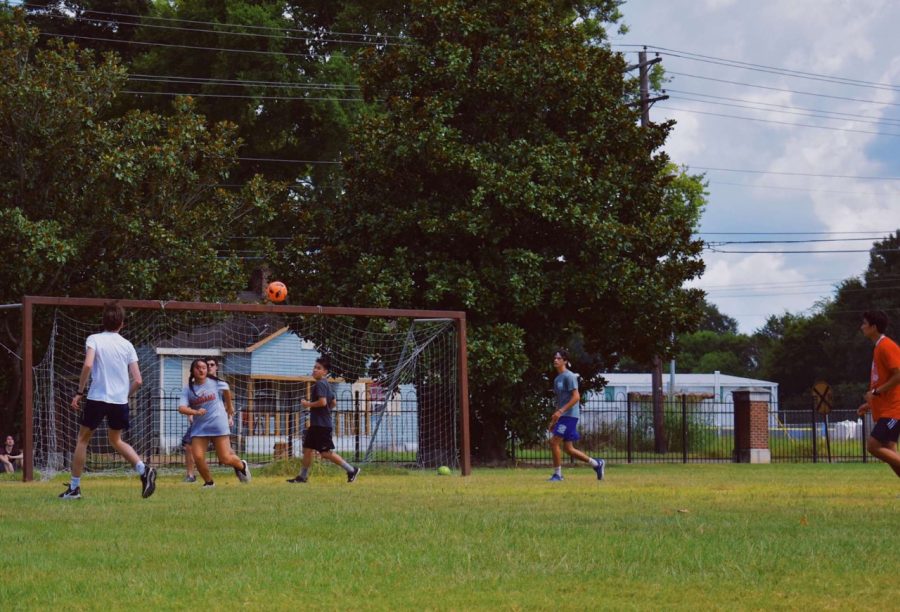 Soccer season is kicking off, and MSMS soccer teams began practicing on Oct. 12. Players and coaches said they are excited for what the new season has to offer and for their first game on Oct. 28.

There are many new members on both soccer teams, and girls’ soccer coach Chuck Yarborough said he is happy that so many people joined the team.

“We have a record number of students participating on both the girls’ and the boys’ soccer teams. Nearly 29% of our student body is taking on the opportunity for excellence on the soccer field,” Yarborough said.

Junior James Talamo, who is the goalkeeper on the boys’ team, said he joined the soccer team to be able to participate in the sports environment.

“I joined the soccer team because team sports have always meant something special to me. While MSMS has talented students who’ve played years of soccer, the way new players have been showing out and really connecting and learning the game in a positive way shows a lot about the MSMS community,” Talamo said.

Junior Ann Grace Donahue, who plays left defender, said that she has played soccer since she was eight years old, and it was something she has waited to start since the beginning of the school year.

“It’s what I do to let go of steam while still being proactive,” Donahue said. “I enjoy being able to get into sports, and soccer [is] a way for me to do that.”

Talamo and junior Blair Different, who plays goalkeeper for the girls’ soccer team, said that the practices are going great with everybody on the team and the coaches.

“Practices have been going really well. They’ve proven that we have the skill to go far and shown where we need to improve as a team,” Talamo said.

“I love the team’s energy. It’s always supportive and fun,” Diffrient added. “Even on the conditioning days that are tough, you have everyone showing great sportsmanship, and Coach Yarborough is very supportive and roots for all of us.”

Yarborough said everyone has improved during practices and are excited for their first game at Columbus High.

“Practice has been great to this point. Senior leaders on both teams [Madison Johnson, Destiny Van, Elena Eaton, Rutherford, Carter Miller, Chingun Tsogt-Erdene and Nicholas Djedjos] have set a constructive tone, and our players are growing each time we step on the field. Both teams also have several experienced juniors [Quinn Boerner, Claire Ellison, Kadie Van, Ann Grace Donahue, Blair Diffrient, Aaron Sharp, Sawyer Levenson, James Talamo and Osmun Caddel] who will be key contributors from the kickoff of our first matches,” Yarborough said.