Dramatic Performance comedy the perfect end to a week at MSMS 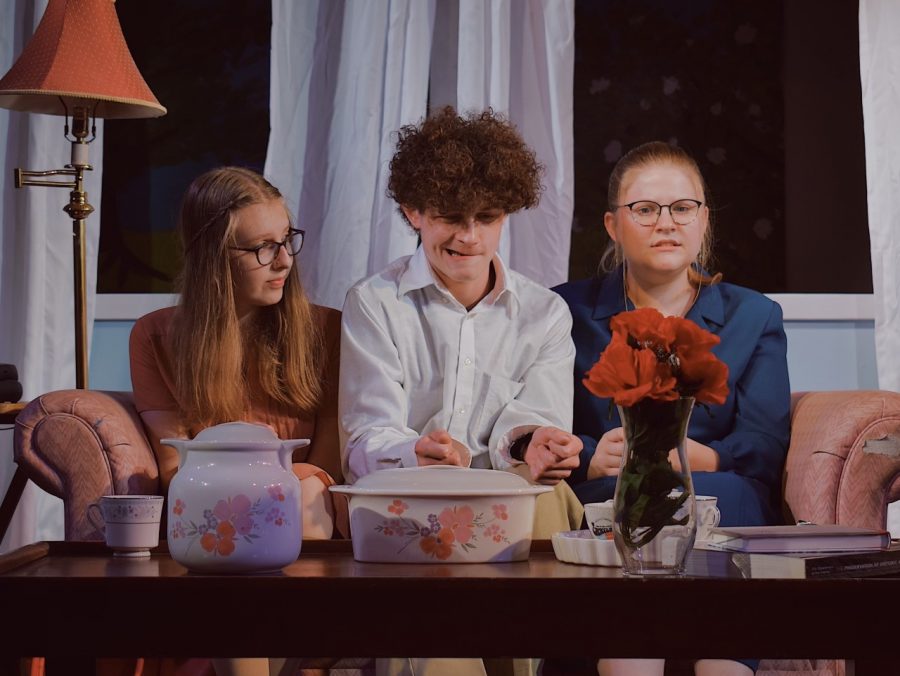 Sharp, Jenkins and Reed get into character for 'The Nerd.'

Who would have thought that macaroni salad, killer pigs, tambourines and crates of chalk would ever come together in one performance? Somehow, “The Nerd” — a play performed recently by the MSMS Dramatic Performance class — manages to connect all these ideas into one hilarious production.

With Dyllon Martin taking on the leading role of budding young architect Willum Cubbert, the play focuses on the sudden conflict between veteran Willum and the man who saved his life in Vietnam, Rick Steadman (Caleb Jenkins). Considering Willum has never had the chance to meet Rick, he is ecstatic when Rick shows up at his apartment on his birthday; however, as time passes, Willum begins to recognize his companion is not only a nerd, but also a source of trouble, such as causing Willum to be fired by his boss, Wendy Waldgrave (Kylie Reed). Aided by his buddy Axel (Andra Dusin) and his girlfriend Tansy (Madelyn Phillips), Willum must find the gumption to give Rick the boot. Extra comedic effect was provided by bratty 8-year-old Thor Waldgrave (Jay Snodgrass) and overworked mom Celia Waldgrave (Chloe Sharp).

This play not only made history for MSMS by being the first ever two-act play to be performed, but it also pushed the boundaries of what most people expect from a high school play. With slight vulgarity at times, the play manages to effectively portray adults who all struggle to find balance in their individual lives. With the Dramatic Performance class making up the cast and the Drama Club assisting in the behind-the-scenes work, the two groups worked together with sponsor Dr. Thomas Easterling to put the play together. Jenkins assumed the role of director for this production, and senior Audrey Robinson was producer. Under their lead, “The Nerd” was fabricated and perfected in a span of only a few weeks; however, it was very helpful that most of the actors were seasoned theater kids.

Although unexpected, this production proves the arts are prevalent even at a math and science school. With the help of many twists and surprises, the play is extremely comical and engaging to anyone sitting in the audience. There were very few dull moments, and the surprise ending left viewers shocked and wanting more.