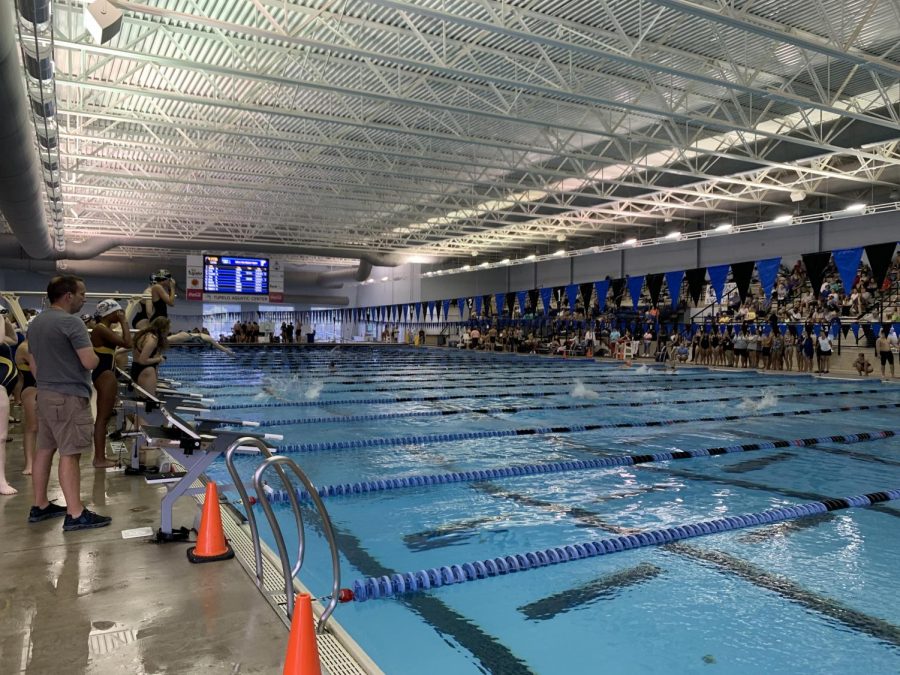 The MSMS swim team competes in their first meet of the year.

The MSMS Blue Waves competed in their first swim meet of the season on Sept. 21.  Andrew Yu, Andrew Liu and Isaac Riggins will be advancing forward to the North State Meet later this season.

Four swimmers competed in the different events of 50-meter freestyle, 200-meter freestyle, 100-meter breaststroke and 100-meter backstroke. Each member had their own goals for the season ranging from just having a good time to competing in the state competition. Yu, Liu, Riggins, and junior Georgia Gibson prepared in the previous weeks for their first meet.

“We’ve been practicing for a few weeks now on Mondays, Tuesdays, Thursdays and occasionally Saturdays. Some of our swimmers are relatively new, so during practice, Coach Chris [Chain] has mainly been increasing our levels of endurance so that we feel comfortable to race,” Yu said.

“The team performed really well since most of the team, from what I know, already have what is considered qualifying times for state. I did a lot better than I expected, and I beat my goals I had for the meet. Also, I was extremely nervous, but my teammates encouraged me and gave me hope,” Gibson added. “The atmosphere at the meet was not bad. Many teams were cheering each other on, but you could feel the pressure in the room; however, it’s the kind of pressure that pushes you to do better.”

“As a team, we all performed relatively well. I think the most notable achievement was for Isaac, as this is his first meet ever and he has already qualified for North State.” Yu said. “Individually, I am somewhat satisfied with my performance, but I still feel like I could have performed better. During my 50 free, my goggles leaked a little water inside, which was somewhat unfortunate.”

The four swimmers each said they have hopes for their future meets and goals for their competition times.

“I think this swim meet was a good first meet, as I didn’t drastically slow down or perform terribly. I think this meet mainly reminded me how competition is like so that I will be more prepared next time.” Yu said. “I think that I’ll mainly do the same things for the next meet, but I’ll make sure to tighten my goggles more.”