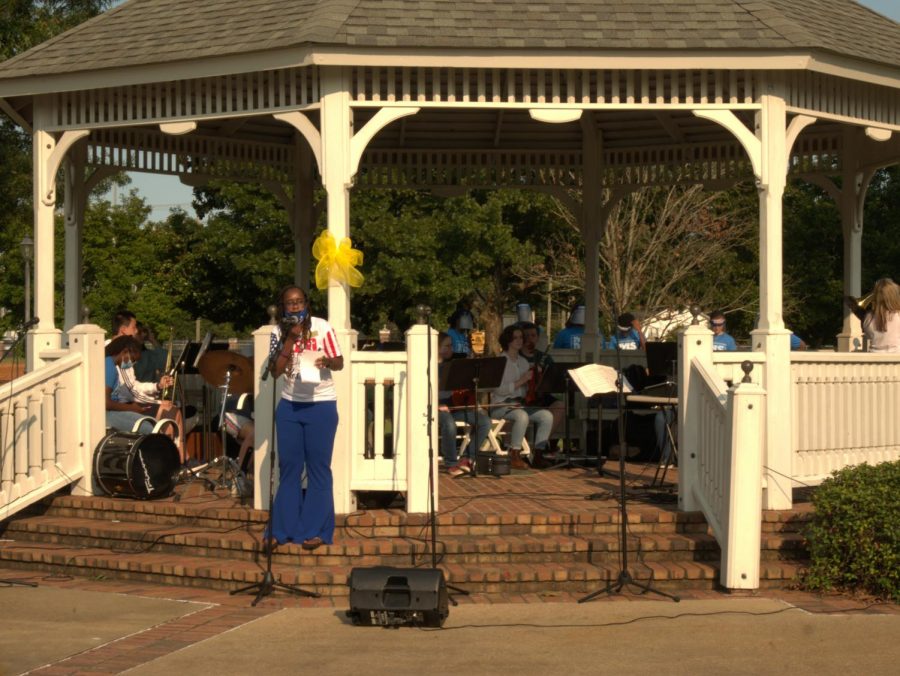 MSMS remembers 9/11 with a program organized by Ms. LaToya Bledsoe.

The event opened with a welcome from Student Government Association President Nicholas Djedjos and Senior Class President Vineel Vanga, which was followed by a performance of The Star-Spangled Banner by Madelyn Phillips, the presentation of colors from Avery McMechan and students from Grenada High School, musical selections from MSMS Voices in Harmony and Blue Notes and a special dance performance from NAACH Indian Dance Club. It ended with a balloon release.

The program was interrupted by a lockdown, but performers and attendees successfully returned to the MUW gazebo to continue as soon as it was safe to do so.

Bledsoe said the event is significant to her, especially during the COVID-19 pandemic.

“I feel like our performance could’ve been better,” Jordan said. “It was good for the amount of time that we had. I liked it. It was fun. Band here is a lot more laid back than band at other schools, and it was nice to do something to commemorate the event.”

This year’s 9/11 program was held in person, something Bledsoe said she was appreciative of, since last year’s was virtual.

“I think this was even more special because of the fact that we are still operating in the midst of a pandemic, and being able to have students back on campus and having a sense of being normal made it even more special,” Bledsoe said. “Last year I hosted it on Zoom. This year it was outside and the MUW community connected by giving out stickers, and we had parents that attended, so it was an open-wide event.”

Dia Kher, a junior who attended the program, said it was an important event to hold for students.

“I think it’s important because it’s a significant event that happened in American history, and especially since it was the 20th anniversary, it should be remembered. We should not look back at the event in a negative light, but we should use it to progress our future as a country,” Kher said. “My favorite part of the program was the musical features that the band did. I chose to attend because I think it’s important to support the student leaders and organizers that planned the event.”