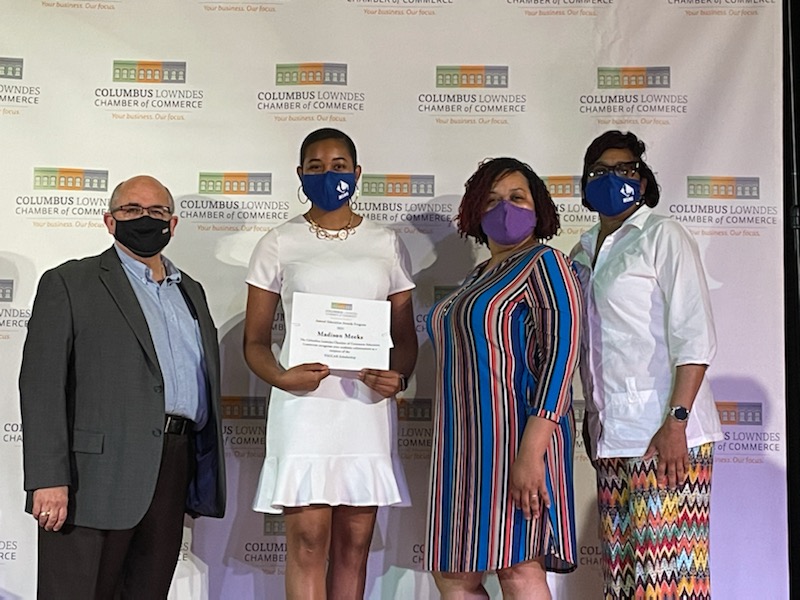 Senior Madison Meeks was one of several MSMS students honored at the Columbus-Lowndes Chamber of Commerce Awards.

Out of 30 applicants, six MSMS students were chosen as award recipients at the Lowndes County Chamber of Commerce awards this year, with Shelby Tisdale capturing the top prize.

“I am so proud to be a part of a community of so many talented and deserving individuals, and I feel incredibly honored that MSMS and the Chamber of Commerce selected me for these awards,” Tisdale said. “They have allowed me to reflect on how far the support of MSMS, my friends and my family has gotten me, and realize that my efforts have not gone unnoticed.”

Each year, the Lowndes County Chamber of Commerce honors students and educators from across the county for outstanding achievement.

The ceremony was held in-person at the Trotter Convention Center in downtown Columbus. The five other students who received awards were Jessica Yan, Cameron Wright, Xavier Black Jr., Madison Meeks and Niyah Lockett.

“The event was very cordial, and it was nice to have some semblance of normalcy during the ongoing pandemic,” Lockett said. “I haven’t dressed up for an awards ceremony in a while, so having an in-person event where the crowd cheered you on made it that much more special.”

Lockett won the 4-County Electric Corporate Scholarship. The BankcorpSouth scholarship was won by Xavier Black Jr., and the PACCAR scholarship went to Madison Meeks. Each scholarship winner was awarded $500 to spend at the college/university of their choice. Cameron Wright received the highest 12th-grade GPA award, and Jessica Yan received the same honor for her 11th-grade GPA.

“I felt very surprised and honored to have been able to receive this award,” Yan said. “There are so many talented, hard-working students at MSMS, and I felt that earning this award was going to be anyone’s game. This school year has really been tough and stressful for many students, especially due to the pandemic, but we all managed to get past the rough waters.”