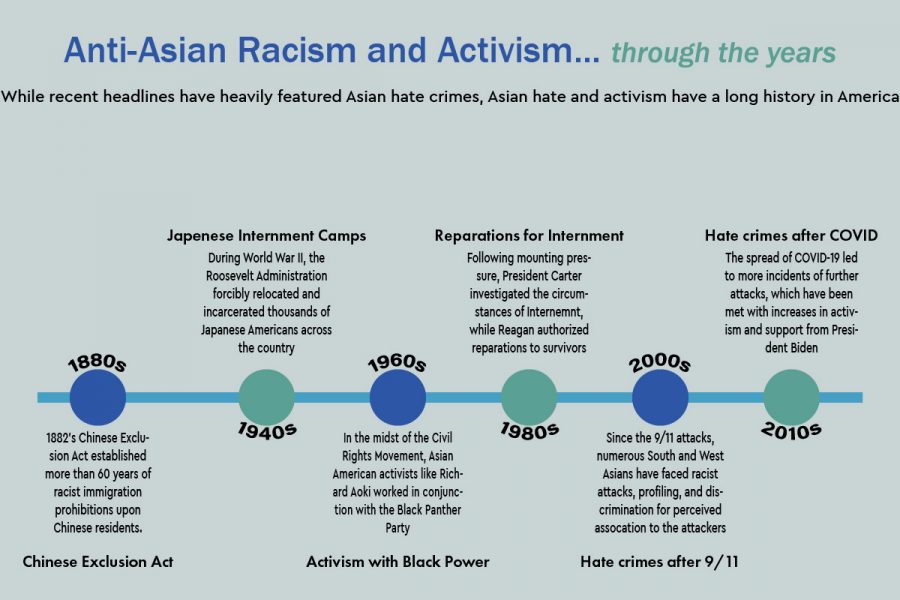 Anti-Asian hate crimes have always existed but have been on a rise recently due to prejudice regarding covid-19.

In the days after the Atlanta shooting, my parents never spoke of the hate crime with me. Instead, an uneasy silence settled at home. What more could they have possibly said? They had been warning me to prepare for a surge in anti-Asian rhetoric since the outbreak of covid-19, and I had naively brushed it off as excessive pessimism.

When I turned to social media, it was no better. The cookie-cutter statements of solidarity that served as no more than virtue signaling were already circulating, soon to be forgotten within days of the tragedy. It felt wrong to share my fear and bare my soul on the internet when I knew my pain would be treated as the elephant in the room, casually ignored by most of my peers.

While communities across the nation mourn, performative activists overwhelmingly post about ending everyday racism with changes in our everyday lives. That’s fine, but where is the discussion about overt racism, mockery and alienation? What about Donald Trump’s lingering hateful rhetoric? What about the thousands of fear-mongering articles that keep scapegoating China for domestic problems? What about Representative Chip Roy, who blustered about how the Chinese Communists—or “Chicoms,” as he termed them extensively and demeaningly—were the “bad guys” during a hearing about AAPI violence and discrimination, purposely diverting the focus away from our pain?

No change can occur if influential people keep painting targets on the backs of Asian Americans.

The problem with putting most of the attention on microaggressions is that the Asian community has been talking about them for so long, and still, the racist names, taunts and violence persist. Seeing performance activists parroting our words—but presenting it as the higher moral ground instead of basic human respect—when they post about the Asian community feels like a slap in the face, doubly so when there is a lack of information on how to translate outrage into legal action and supporting systemic change.

To focus on everyday issues without addressing problems at the top only produces short-term action. There is outrage now, but there is no guarantee that it will lead to lasting change or continue once #StopAsianHate stops trending.

That is the essence of performative activism, as opposed to truly spreading awareness and supporting the Asian community. The lack of action and productive change speaks more than words ever will. Because there is no obligation for anyone to become an activist, choosing performative activism is the easy way out.

Perhaps even worse, though, people are still denying that xenophobia motivated this incident. The shootings had a massive impact on Asian Americans. Why people still believe a murderer, who killed eight and wounded one, when he says his actions were meant to end temptations for his “sex addiction” is baffling. Not only does this explanation imply that Asian women are logical victims of sexual violence, but it also conveniently ignores the dozens of white-owned strip clubs and lingerie stores near the affected Asian massage parlors.

At the end of the day, it’s still the same story. People focus on the shooter over those who were killed, crowding out the Asian community’s voices with outrage over a single person they can pin widespread, intangible racism on. People still debate whether the shooting is a hate crime, spreading a murderer’s message while ignoring the fear that has settled deeper in the Asian community.

Surface-level, short-term support and vague calls to action can be well-intentioned, but they pack little punch. We will only see more examples of xenophobia as the US-China soft war for power kicks off, and combating microaggressions simply isn’t enough. As long as “having a bad day” is used as an excuse for white terrorists, police departments callously defend murderers over victims and Asian Americans are seen as expendable shooting targets for someone else’s problems, racism will prevail.

If you want to make a difference, donate to the AAPI Community Fund and other fundraisers, support Asian businesses, walk with the elderly, report anti-Asian hate crimes, mourn outside of social media, protest and, most importantly, unite to take action. Maybe, maybe, this call for change can actually carry some weight behind it.