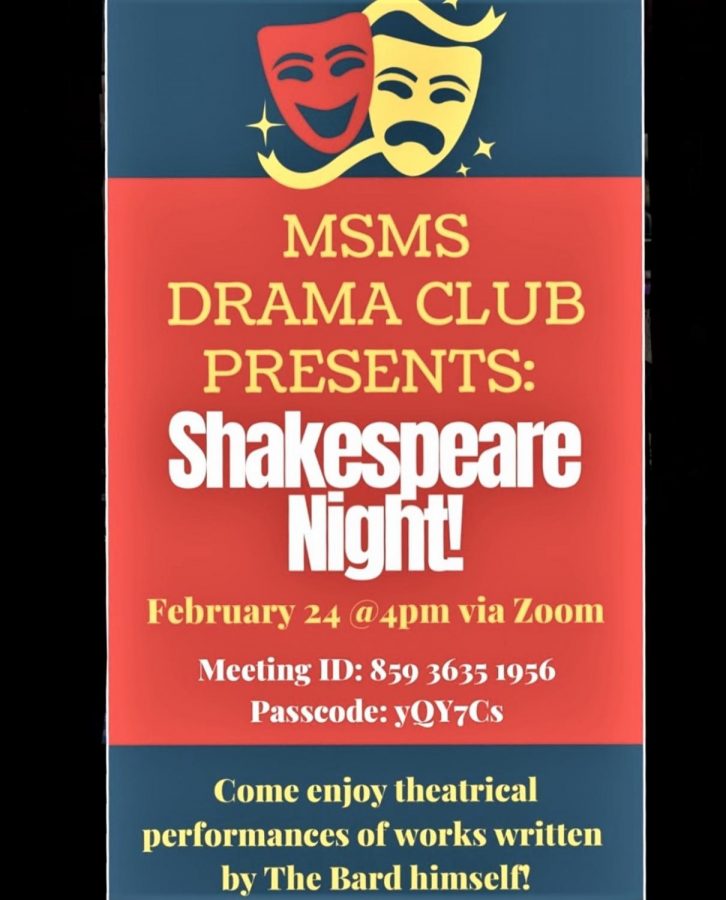 Courtesy of the MSMS Drama Club

The MSMS Drama Club hosts their first ever Shakespeare Night, with dialogues from Hamlet, Macbeth, Romeo and Juliet, and Julius Caesar.

Max Dobbs approached her performance as Juliet’s nurse on Shakespeare Night with some pleasant consternation.

“I didn’t know what Shakespeare implied with some lines, so I interpreted them as needed for the performance,” Dobbs said. “One lovely and confusing line was, ‘I am the toil and drudge in your delight, but you will bear the burden soon at night.’ I interpreted this to be a moment where the nurse connects with Juliet, saying that, while Juliet might feel the nurse is holding her back, the nurse just wants her to marry a good husband and have grandchildren of her own.”

Dobbs was one of eight students who performed at MSMS Drama Club’s Shakespeare Night on Wednesday, March 4. Members performed dialogue over Zoom from some of Shakespeare’s most famous plays: “Hamlet”, “Romeo and Juliet”, “Macbeth” and “Julius Caesar”.

Many of the actors described the challenge of getting into the headspace of the characters.

“At first, I was a bit wary of this role, being that Brutus is a strong, gruff male character, with which I have little in common,” Robinson said. “Though, after given a bit of time to explore the emotional turmoil that this character was facing during this scene, I found myself becoming one with him and feeling more comfortable with the range of emotion he gives in such a short scene. I would love to have a chance to explore Brutus even more if we were ever to do a full version of this show.”

Each performer felt satisfaction towards their own performances as well as towards the program in general. Drama Club vice president and senior McElhinney elaborated on this feeling.

“I was very nervous, so I think I spoke faster than I intended to, but overall I feel like I did really well. My enunciation was good for how quickly I spoke, so I was proud of that,” McElhinney said.

Shakespeare Night was advertised through a series of posters placed around campus, email and a social media flyer. Many attendees including junior Balee Wilson found out about the event through friends.

“I heard about Shakespeare Night through email and also through my friends. Some of my close friends were performing and I thought it would be neat to watch them,” Wilson said.

Junior Molly Mosley discussed her feelings about the performances as a whole.

“They were all beautiful. Max and Kate slayed the Juliet and Nurse scene, and Max 100% embodies the nurse,” Mosley said. “Maddie and Caleb’s scene was so beautifully done, wonderful actor and actress. Chloe and Audrey always amaze me with their talents and enthusiasm with anything theatre.”

Robinson and others emphasized their excitement at the number of attendees at Shakespeare Night, which had the biggest turnout of any Drama Club event thus far.

“This was easily our biggest crowd yet. Getting attendance for virtual events has been difficult, but it made me smile to see so many faces from not only MSMS but my homeschool and family as well,” Robinson said.

“I am so happy with the outcome of Shakespeare Night. Everything went so smoothly and we had the most viewers yet attend this performance,” Rowland said.

“Overall, it was a wonderful event. I enjoyed every single second of it,” Wilson said. “Every actor and actress did an amazing job, and I don’t think it could have gone any better.”