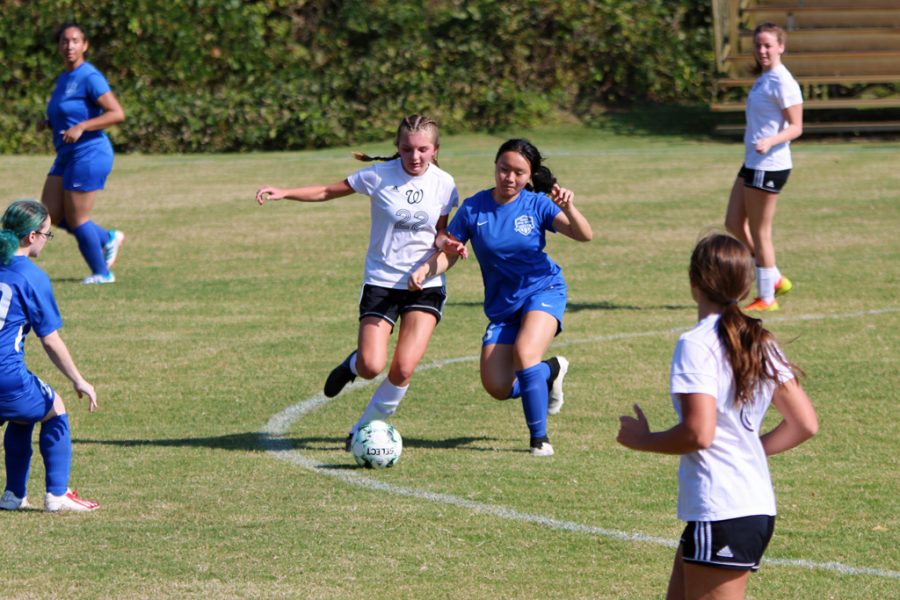 Junior Destiny Van challenges a Winona Tigers forward in an attempt to gain possession of the ball.

The girls’ soccer team continued their winning ways over the weekend,  shutting out Winona 4-0 at home to bring their record to a perfect 3-0.

The boys’ Saturday game was canceled due to COVID protocols for the Winona boys team.

“The most memorable moment was when my teammate and roommate Weslyn [McMurrin] scored off the corner kick I crossed in,” Anderson said. “I was super proud.”

Several players stated that this game was more competitive than the previous games, likely due to the Waves having played a game only two days before facing Winona.

Junior Vidhi Patel shared her satisfaction with the team’s performance in light of this challenge.

“I feel like this was one of our more competitive games,” Patel said. “The team had to work harder for our goals and communicate better as a team. Considering we had a game 48 hours before, we held up very well.”

“After a hard-fought win Thursday, it was great to see the girls respond so strongly less than 48 hours later,” Yarborough said.

Overall, several players, including junior Destiny Van and senior Camille Newman, were proud of the win.

“I feel that our team has been doing exceptionally well considering that we don’t have many practices together and that some of us have never practiced together,” Van said.

“The team did amazing,” Newman said. “I loved getting to see all my old teammates and really learn more about my junior teammates as we grow into our soccer family.”

“Our defenders deserve a shout out,” Yarborough said. “Karlene Deng and Destiny Van led the way eliminating threats in our defensive third, and goalkeeper Camille Newman preserved the clean sheet with 2 saves.”