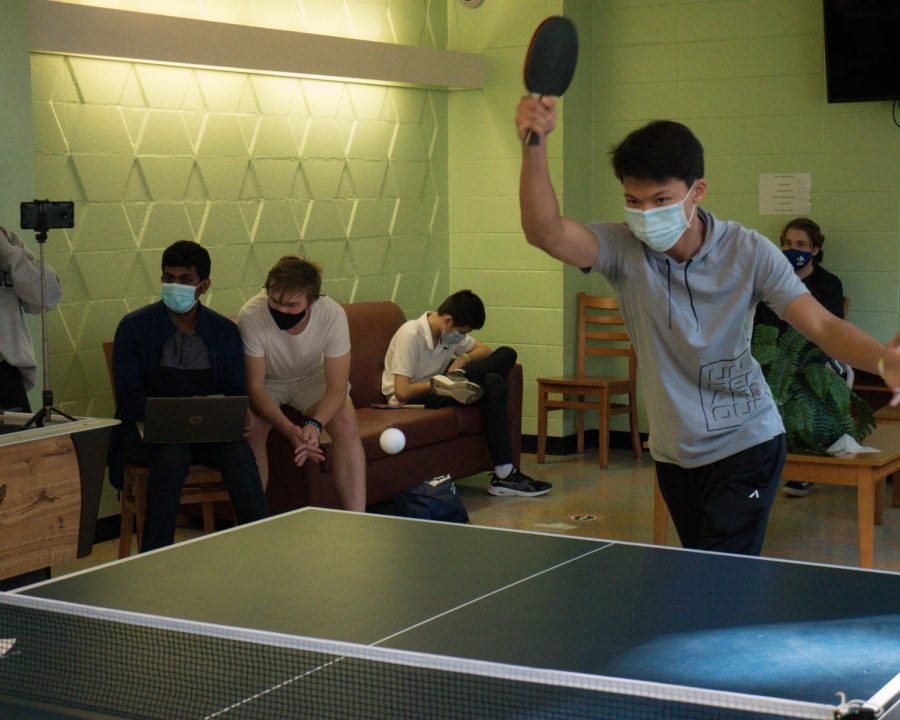 Over the weekend, students on campus competed in a ping pong tournament.

At a campus like MSMS, many things like academics, social standing and preparing for college are constantly on students’ minds. With that being said it may come as a shock that on Oct. 31, 2020, none of the students were thinking about any of the aforementioned things. The main focus for some of the student body was directed at one thing: ping pong.

Juniors Nicholas Djedjos and Sam Sun hosted The Ping Pong Tournament in Frazer Hall. It consisted of a single’s bracket of  22 competitors who took part in the competition.

Competitor and co-organizer Sun, who did not lose a single game throughout the entire tournament, talked about how he felt before going into the tournament.

“Going into the tournament, I would be lying if I said I wasn’t worried at all. There are many great Ping Pong players at MSMS, and many of whom I’ve lost to,” Sun said. “The outcome of the tournament didn’t really concern me because when Nicholas and I were organizing this tournament, we simply wanted this to be a fun experience for everyone. Although, having bragging rights is pretty nice.”

For tournament organizer, competitor and junior Djedjos, organizing the tournament proved to have its fair share of struggles.

“Sam and I often worked together in the library to create Google forms, discuss match rules and send out emails,” Djedjos said. “COVID-19 added another layer of complexity; we had to wipe down the paddles after each person used them, and to ensure social distancing, only ten people could be in the Frazer lobby at a time. Still, our planning paid off, and we had a fun, successful tournament.”

For some competitors, however, their expectations going into the tournament did not quite meet up with the end results. Zhou was one of the competitors that felt this.

“I did not play as well as I thought I would have today, considering all of the spectators which gave me a little bit of pressure,” Zhou said. “I only practiced rallying with a few select people before, so I was not used to other players’ technique, which threw me off, but I tried to adjust as much as possible during the tournament.”

It was not only the competitors that were fully immersed in the competition’s spirit, however, but also the audience. Junior Zaria Cooper gave her opinion about the environment of the tournament during the competition

“I would describe the feeling of the tournament to be very lively. The audience was very supportive, and watching everyone play was so exciting,” Cooper said. “However, despite me almost getting hit in the head with the ball, I would definitely love for another tournament to take place.”