Vanga and Springer: The final debate was Biden’s pinnacle and Trump’s demise 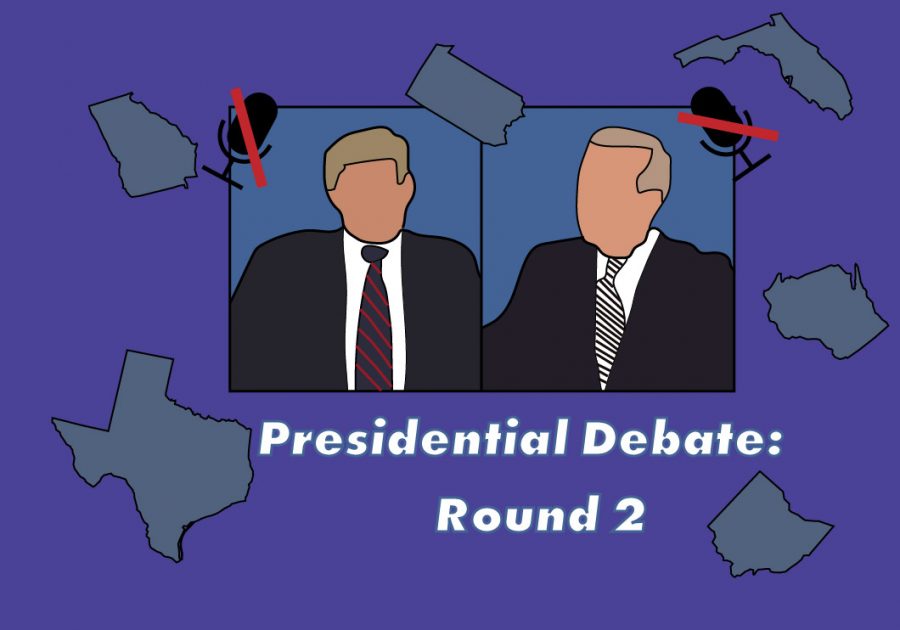 Both candidates had their final debate and now wait to see who will be the next president.

The final presidential debate covered many topics, such as the pandemic, Donald Trump’s finances, race relations and reforming the prison system.

Precautions were taken to make sure that this debate was more productive than the first presidential debate.

The microphones for both Trump and Joe Biden were to be muted after each of the candidate’s time limit of two minutes for the speaking time was completely used in order to prevent both candidates from continually interrupting each other as was the case in the first presidential debate.

For Biden, it’s clear that this debate was a standout success for him, but for President Trump, the same cannot be said.

This debate, while less heated, did nothing but fuel the fire in Democrats everywhere to vote him out of office, as it should have.

Biden, unlike Trump, made his stances very clear rather than deflecting from real issues.  Trump used most of us speaking time to to blame others for his actions or to brag about himself.

This is seemingly another sign that, even after being diagnosed with COVID-19 himself, Trump has no regard for human life, including his own crew.

The debate started out with the discussion of the pandemic. Trump repeatedly blamed China for mishandling the virus from the beginning. This is ironic considering Trump has not been doing a very good job of keeping it at bay either. He also spent his two minutes teasing a vaccine that may or may not be released in weeks, instead of discussing policy to stop the spread without the vaccine.

The U.S. received its first case of COVID-19 in January of 2020 and the government ignored it for three months before taking any action. Biden repeatedly stated that Trump did a treacherous job at stopping the spread of the virus. This is true considering over 200,000 people have died from COVID-19 and there are currently almost nine million cases.

Biden encouraged viewers to wear a mask and explained his plans for the virus if elected. He plans to give schools and businesses funding to maintain sanitation for the safety of the people and students coming in and out of these places and invest money into testing. He also hinted that there may be a countrywide mask mandate if he is elected.

Going through their central arguments it was clear that President Trump merely tried to convince Americans with his hollow words that he is doing the right thing. However, these words are not being received well because the ramifications of COVID-19 are speaking louder than the false words that President Trump has been trying to echo.

Biden on the other hand obviously approached this issue from a more sensible view. By taking time to thoughtfully outline a plan for COVID-19, Biden showed that he is more equipped than the entirety of the Trump administration in handling these times.

These words for President Trump are far from genuine. The Trump administration has constantly been accused of being one of the most racist presidencies and for good reason. With regard to the Black Lives Matter (BLM) movement, President Trump has done absolutely nothing to address the blatant gap in equality between whites and people of color. Instead of trying to do what he could to minimize the tension between both groups of people all he has done is make things worse by polarizing the groups even further. President Trump decided to question why black people thought it would be a good idea to burn down buildings during their protests and proceeded to use a flurry of derogatory comments directed at their movement throughout the entirety of BLM.

President Trump saying that he “is the least racist person in this room” is one of the biggest lies that American citizens have been fed by the current president. Someone that chooses to draw harsh lines between different groups of people and thinks it’s morally acceptable to direct hate at people who have already been beaten to the floor by the injustice that exists in the country in which he promised them equality is someone who should have nothing to do with the executive branch of the federal government.

Kristen Welker, the moderator for the debate, questioned President Trump by asking, “What do you say to Americans who are concerned about that rhetoric?”

Vice President Biden did not take nicely to these comments and rebutted President Trump’s statement with his own:

“Abraham Lincoln here is one of the most racist presidents we’ve had in modern history. He pours fuel on every single racist fire. Every single one. He started his campaign coming down that escalator and saying he’s going to get rid of those Mexican rapists. He banned Muslims because they are Muslims. He has moved around and made every single thing worse.”

On the note of banning people from entering America, the topic of illegal immigration was also in the spotlight for the debate.

President Trump was asked about his opinion on the current situation of immigrant children being separated from their parents.

The LA Times emphasized the importance of this topic by stating that the parents of 545 separated children still haven’t been found.

Trump stated that illegal child immigrants did not come to America with their parents, but instead with people who smuggle migrants into the U.S. and are commonly known as “coyotes.” Trump proclaimed that children who were detained were “well taken care of.”

Trump, however,  didn’t just stop there. President Trump turned attention to Biden by explaining multiple times that the cages built in detention centers were actually built during the Obama and Biden administration

While it was surprising to hear this acclamation from President Trump at first, the anger felt at the Obama administration was quickly quelled.

Biden had his own opinion about the matter and stated that the children who were separated did not come with “coyotes,” but instead their parents. Biden went into more detail about a future plan he would implement in his first 100 days in office that would attempt to provide a pathway to citizenship for immigrants and also those under the Deferred Action for Childhood Arrivals policy  (DACA)- an immigration policy that President Trump tried to terminate that allowed undocumented citizens who come to America as children to study or work legally.

It would have been in Biden’s best advantage to further emphasize the fact that President Trump had the opportunity to get rid of the cages in the detention centers, yet chose not to.

As far as the debate in general, precautions were taken to make sure that this debate was more productive than the first one.

During the debate, it seemed as if Biden was more on the offensive and Trump was more defensive, but overall Biden won. This was a reversal of what happened in the previous debate. Both candidates go into the election on Nov. 3, 2020, to determine the next president of the United States. After listening to both candidates echo their thoughts on many of the most controversial issues. The choice of whether you are #TrumpPence2020 or #BidenHarris2020 is now yours.