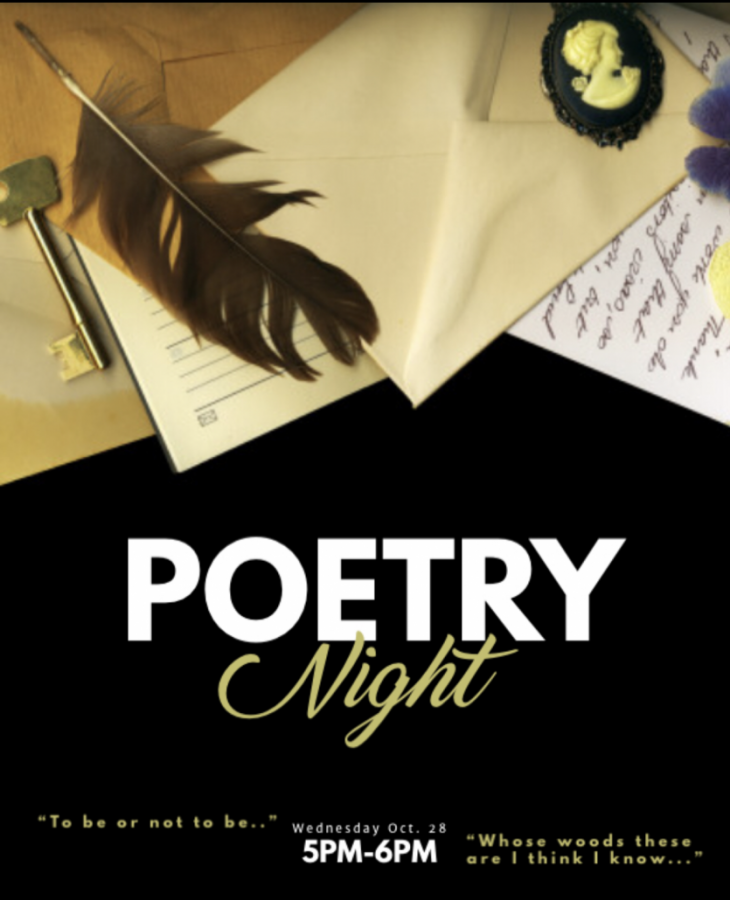 The event allowed students to watch eight of their classmates dramatically recite poems of their choice.

While they did not have a stage, Drama Club members individually performed over Zoom for students and faculty in their first Poetry Night. On Wednesday, Oct. 30, eight drama club members read their favorite poems with their own artistic interpretations.

Drama Club President Gracie Rowland planned this event based on her own passions.

“The inspiration behind the event came from my personal love of both literature and drama. Every section of the arts must lean on each other, and Poetry Night exhibited that process wonderfully,” Rowland said.

Performers had complete freedom in deciding their poem and how they performed it. Some people, like Rowland, took a more dramatic turn with their performance, while others simply recited their poem.

“I chose a poem by Adrienne Rich because I really like her works and her poems tend to have really inspiring feminist undertones,” senior and Drama Club Vice President Kate McElhinney said. “I signed up pretty last minute, so I didn’t have as much time to prepare as I would’ve liked, but I think it went really well. I wish more people would’ve come, but I understand that we chose a relatively busy time to hold the event.”

Although there was not an abundance of attendees, those who came to the event enjoyed the range of performances.

“I thought that all the performances were captivating. It was really interesting to see each performers’ interpretation of their poems. I loved seeing them bring the poems to life and just experiencing their acting,” senior Makenna Riley said.

Rowland was proud of the club members’ performances as well.

“I enjoyed the performances wholeheartedly. The actors worked incredibly hard and it was so rewarding to watch their performances grow as we workshopped them in practice,” Rowland said.

Poetry Night is one of the many events and activities Drama Club has planned for its members and the entire student body.

“We have a Monologue Night and Improv Night planned for the online portion of the year, as well as a table read of Dr. Easterling’s play,” Rowland said.