Cheater: A fly generated more buzz than the candidates during last week’s debate 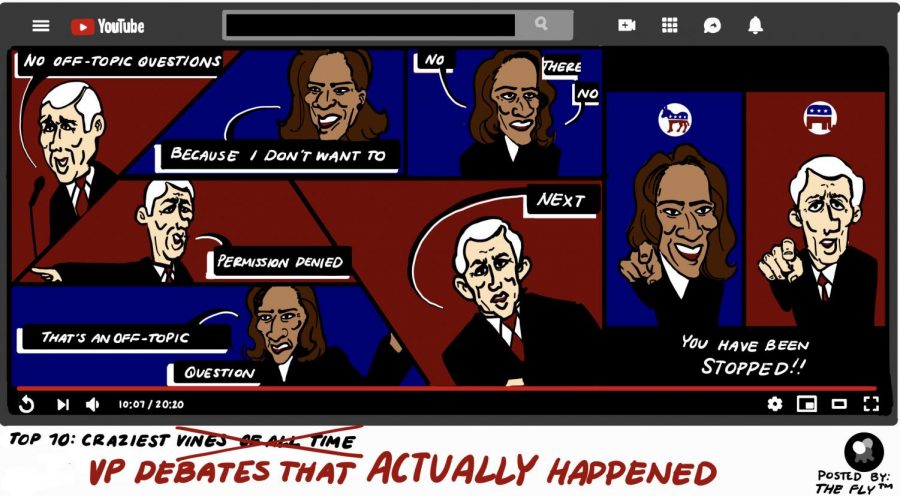 Watching Wednesday’s debate was nothing short of a rollercoaster of emotions. On one hand, I was relieved the candidates were mostly able to speak without interrupting and attacking one another; on the other, I was incredibly disappointed that, even though the candidates could actually speak, neither of them actually answered many of the questions. The entire debate was, well, underwhelming, which I suppose could be a good thing after the Biden-Trump debacle.

I couldn’t help but be annoyed every time Vice President (VP) Pence or Senator (Sen.) Harris dodged a question or simply refused to answer it. There were several topics such as abortion, the economy and court-packing that could have easily swayed undecided voters, yet each campaign made a strategic point of not providing their viewpoint. It was incredibly frustrating.

We turn on the TV to listen to their policies to see which candidate best represents us, but what do we get? We get Sen. Harris refusing to answer on whether or not the Biden Administration will revive the old FDR trend of court-packing (granted, Biden himself said on the Friday following the debate that “voters don’t deserve” to know his stance until after the election. How suspicious.). We get VP Pence dodging a question on abortion, and we get misleading and outright wrong facts fed to us from both sides.

Don’t get me wrong, I’m as happy as anyone that they mostly refrained from personally attacking each other, but it just seems like both of them completely missed the point of why they had the debate in the first place. Court-packing and abortion are big issues that voters care about, and it’s shameful to see them so deliberately dismiss them.

Both sides walked away a little embarrassed as well. Sen. Harris claimed the Biden Administration would repeal the Trump tax cuts, which save the average American family of four $2,000 per year, in direct contradiction to Biden’s plan of repealing only part of the cuts. She also falsely claimed manufacturing is in a recession when it is not. As VP Pence said more than once, Sen. Harris is “entitled to her own opinions, but not her own facts,” a quote from the late Sen. Daniel Patrick Moynihan (a Democrat).

However, VP Pence isn’t innocent either. He claimed the increasing number of jobs is due to the Trump Administration’s policies when in reality, it’s largely due to businesses reopening. He also had a habit of discussing what he wanted to talk about instead of addressing what the moderator asked. As if it knew what was coming from VP Pence’s mouth, a fly landed on his head and stayed there for over two minutes, which was probably the most interesting part of the debate.

What desperately needs to happen is a debate dedicated to a specific topic or issue. Economic issues are way too complex to cover in a two-minute segment, abortion needs to be discussed, not dodged and candidates need to be transparent with their policies.

Of course, it is unlikely that will happen any time soon, so it’s up to voters to educate themselves (here, here or here, among other places). All in all, the debate was underwhelming and disappointing since none of the candidates really shared their views, but it was a nice break from the personal attacks seen last week. Regardless, everyone should request mail-in ballots or show up to the polls on Nov. 3 (with a mask)!