‘The Devil All the Time’ : Intriguing story with no style 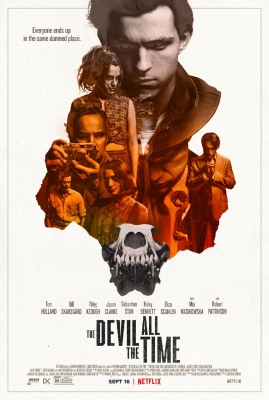 "The Devil All the Time" connects the lives of vastly different people into one central story.

Themes of religion, revenge and fate are all front and center in Antonio Campos’ newest film, “The Devil All the Time,” released on Netflix last Wednesday, Sept. 16. With a star studded cast led by an incredibly underrated director, the film seemed promising ever since it was first announced way back in September of 2018. Although the film delivers an impressively grand narrative as well as wonderful performances from the ensemble cast, it lacks a certain substance and unique sense of style imperative for creating a memorable cinematic experience. Throw in some completely unnecessary narration and “The Devil All the Time” has its fair share of flaws that keep it from rising from good to great.

As mentioned before, the film’s narrative spans multiple generations, with each character’s story tied together through sheer coincidence or fate, depending on how you view it. The way the story is structured is by far one of the film’s strongest points; I was genuinely impressed by how masterfully each plot point was set up and woven into the others, even though the outcome did feel a little predictable by the beginning of the third act. The film is paced incredibly well, never spending too much or too little time on any one character.

If you approach the film with high hopes for the impressive cast, you certainly won’t be disappointed. Everyone on screen delivers stunningly authentic performances, something that is key to selling a narrative with as much raw emotion as this. A definite career best for Bill Skarsgård and Tom Holland, and yet another entry in Robert Pattinson’s recent hot streak of landing phenomenal roles. Holland was quoted as saying “I had to go to places mentally [for the role] that I didn’t know I could go to,” which is no surprise considering the dark subject matter the film deals with.

So, with a tight, well-structured story held together by an array of amazing performances, the film should be perfect, right? Unfortunately not, and the main issue holding the film back is the lack of a distinct directorial style. While Campos’ direction isn’t exactly bad, it can come across as a little stale at times. There seem to be no artistic choices made in the film, with almost every shot framed in the most obvious way, never daring to try anything new. The cinematography is never particularly displeasing to look at, but it also doesn’t do much in the way of holding the audience’s attention.

It seems that the golden rule of writing, “show don’t tell,” was never considered when conceiving the incredibly useless narration that only serves to hold the viewer’s hand and treat them like a child as it makes sure they understand exactly what the characters are feeling. I could probably count on one hand the number of times the narration added something of value to the story. If I could change one thing about the film, I would remove the narration and let the performances speak for themselves.

As I consider what the movie could have done to elevate its status from good to great, one major change comes to mind: it should have been a mini-series instead of a movie. This would have allowed more time to be devoted to further developing the characters and exploring their motivations. While the script is exceptionally well-written, I do find that a few characters could have benefited from a little more screen time. Namely, Pattinson and Jason Clarke’s characters, both of whom play a somewhat major role in the plot but suffer from a lack of exploration into their psyche. While allowing a character’s mindset to remain shrouded in mystery can be an effective artistic choice, it doesn’t quite work in this case. By further exploring their characters, some of the movie’s major themes could have been expounded upon and reinforced, whereas now they are only touched upon at surface level. The movie doesn’t seem to make a statement on its themes, only to display them and let the audience take away what they will.

If you can excuse the superfluous narration and banal camera work, and instead focus on the wonderful performances and excellent storytelling, then “The Devil All the Time” is certainly worth your time. Despite its flaws, many will love the film and it will hopefully mark a new beginning for Antonio Campos’ career, as he shows great potential in his ability to craft an enthralling narrative for the screen.