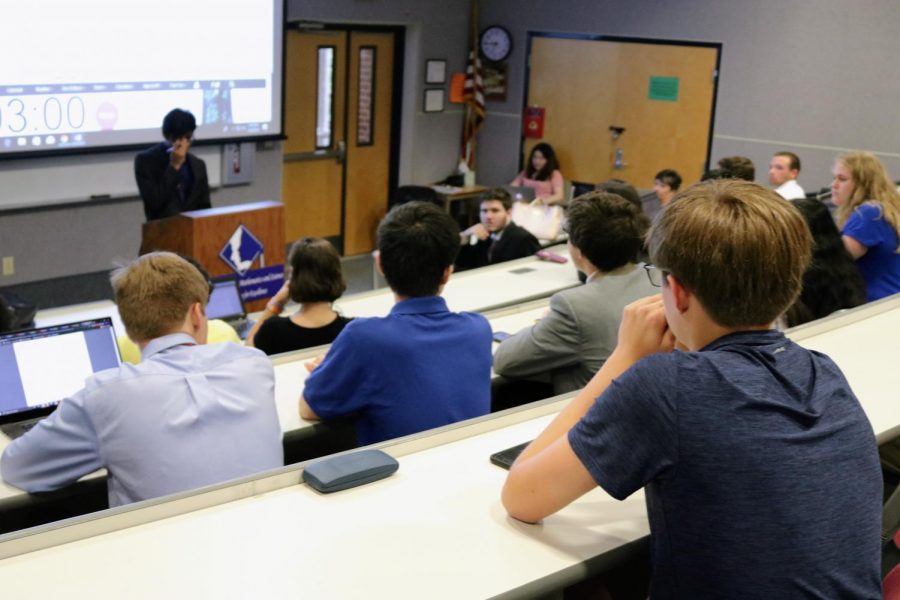 Despite not being together in person, senators have big plans for the school year.

After an abrupt, COVID-induced end to last year’s Senate meetings, the MSMS Senate has returned to its chambers. Virtual learning presents challenges for MSMS students, particularly with virtual elections, but the Student Government Association (SGA) has resurfaced with newly elected Goen and Frazer senators.

On Tuesday, Sept. 8, SGA held a virtual mock session to familiarize senators with Robert’s Rules of Order and motions that are regularly seen in Senate. SGA President Michael Lu began the meeting by giving a president’s address to welcome the senators. He also noted that while Senate is currently happening online, this will not hinder the ability of senators to make changes to the handbook. In fact, he mentioned the need for new, necessary guidelines to the handbook since MSMS is currently online for all students.

“Due to the current situation we have right now, it is important that we establish a new section in the handbook for a virtual learning environment for future references if the situation that we are currently in was to happen again,” Lu said in his address.

While MSMS is currently in a virtual learning format, many of the rules and procedures SGA follows remain the same with some minor changes.

“Senate will mostly be the same in terms of procedures, just a new online format. One new thing that we are trying out is recording the number of times an individual talks, makes motions, makes amendments and to create statistics to support senators who run for future positions,” Lu said.

After Lu’s speech, SGA Vice-President Jackson Flowers and Secretary Nina Vo led the session by introducing two mock bills created by senior Senators Cameron Wright and Aaron Wan. The mock session began with Wright’s bill that discussed the need for new guidelines to ensure that MSMS students are informed of when assignments are due in this new online learning format. The reason for this bill is because of the possible implications that come with the virtual environment, such as mental health.

Wan presented a bill that seeks to increase the number of permissible tardies for first block from one to three. Wan’s motivation to write this speech lies within the harsh punishments that come with being late due to any unexcused reason.

“This was a bill that I wrote last year, and as a junior, I had trouble adapting to a residential life environment that consisted of lots of homework and early mornings,” Wan said. “Because it took me a while to adjust, I got a tardy to my first period one time. And since the punishments for tardies are harsh, like one tardy leads to two hours of work service, it felt super unfair that we have to face this punishment when we are just trying to adjust to this new environment.”

After the senators presented each given bill, a ten minute open debate period occurred for comments, feedback, and corrections to the bill through friendly amendments. As a friendly amendment was proposed, senators either accepted or rejected it based on their judgment. Once the time was up, the session moved into a critical debate period that lasts around 15 minutes. During this period, Senators gave comments, friendly amendments and critical amendments, which is when a change is presented that alters the meaning and purpose of the bill. To move forward with a critical amendment, it must pass with a majority through voice voting. A bill is then voted to be passed, denied or tabled until further consideration after enough discussion has ensued. Wright and Wan’s bills, both were tabled at the mock session, and the Senate adjourned.

After the end of the first Senate meeting, many senators expressed various thoughts about their first meeting. For the new senators, like junior Evangalia Guigley, many are getting used to this new format and job as a senator and appreciate how organized the first meeting was.

“I am still getting a feel for how the whole system works. Despite all that, I really enjoyed the first Senate meeting. It was very well-organized, and everyone seemed to put their heart into their work,” Guigley said.

“It was really fun having the chance to practice with a mock bill by going over it and saying what could be improved, seeing if the bill was passable and learning about the motions and terminology that we will be using regularly in Senate,” Anderson said.

The next Senate session will occur on Tuesday, Sept. 15. Senators Jack Standard and Lucas Rader will present their joint-bill alongside a bill from Senator Taylor Wypyski.

Anyone from the student body is encouraged to attend the Senate meetings held every Tuesday from 4:30 p.m. to 5:30 p.m.

Many senators are excited to see what they can accomplish.

“I look forward to seeing what we, as senators, are willing to do and change for the current student body and for future students ahead,” Wan said.