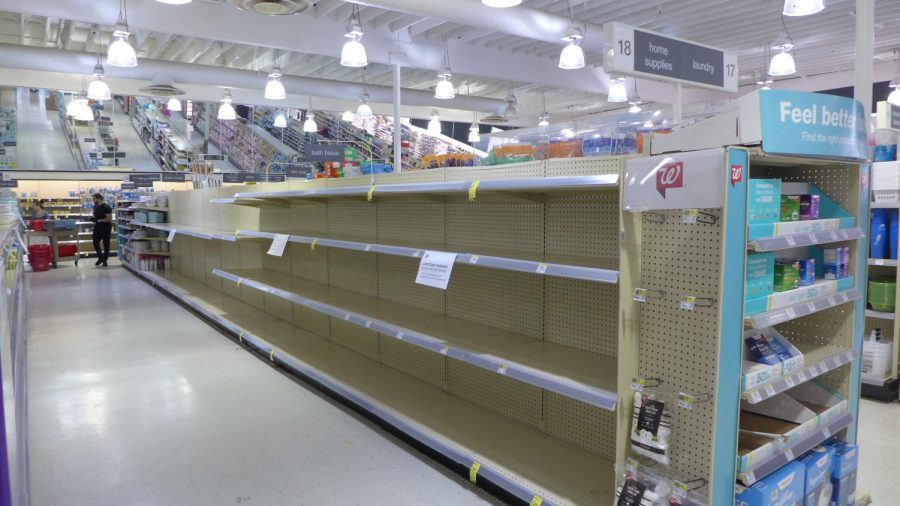 When the pandemic first started, some grocery stores limited how much one person could buy, since shelves were getting cleared out.

“If it ever reach us, it must spring up amongst us. It cannot come from abroad. If destruction be our lot, we must ourselves be its author and finisher. As a nation of freemen, we must live through all time, or die by suicide,” President Abraham Lincoln said as he addressed the threat of possible danger from outside forces.

Looking at the current situation facing the United States today, those words hold more meaning than ever before. Ever since the establishment of our country, individualism has played an important role in our society and identity. In the worst of times, Americans are resilient. We muddle through storms of all sizes and power. However, with nearly 200,000 American citizens dead from COVID-19 and social distancing rules becoming less restrictive, it bears the question: Did we do this?

The obvious answer is yes. While it is easy to point the blame at government officials for the spread of COVID-19 and the havoc it has caused inside of the United States, we have to realize that these people are, indeed, an exact mirror reflection of ourselves. The question is why do so many of us choose to disregard our symptoms and push through?

The answer to this can be found by taking a look at American society. Thinking back to my upbringing, I realized that rugged individualism has been implanted into my mind since birth. The most obvious example I could think of was my parents sending me to school when I was sick. I was expected to power through without thinking about the effects that spreading my illness to others might cause. I never worried about the classmate that could have a compromised immune system or the elderly teacher that could have a life-threatening case of the flu.

The term “rugged individualism” was coined by President Herbert Hoover in 1928 as a way to describe the American philosophy of self-reliance and the need to be free of government control, and this ideology is the problem. What people don’t seem to understand during this pandemic is that the point of staying home and away from large crowds, even if you’re young and healthy, is not to protect you, but to protect those who are not able to withstand the virus.

As a society in general, we’ve developed a very problematic ideology that exclusively centers around us as individuals. “I’ll be fine!” “This won’t affect me.” This mindset is precisely the reason why the United States has handled the pandemic so poorly, and why so many people have unnecessarily lost their lives.

With anti-lockdown protests occurring across the country, it has become very obvious how little many Americans care for the health of their fellow citizens. The protests began in Michigan on April 14, 2020, as many people picketed the Michigan State Capitol in Lansing with signs ranging from, “Live free or die,” all the way to accusing Governor Gretchen Whitmer of being a “tyrant” that was “killing small businesses”. Many of the protesters were there just so they could be able to go to the salon again. In Texas, a series of protests dubbed the “Bar Lives Matter” movement, took hold across the state over the summer in response to Governor Greg Abbott’s mandatory shutdown of all drinking establishments. These protests are a key example of how dangerous rugged individualism is and why it’s leading to the downfall of the United States. Thousands of people across the country have taken to the streets over minuscule things such as a cosmetic haircut or a night out drinking with friends without remotely considering the harm they were potentially inflicting on those unable to fight off the virus.

The side effects of rugged individualism can be seen closer at home, too. Just a month ago, Mississippi was on its way to becoming the state with the highest new COVID-19 cases per capita even though it’s one of the least densely populated states. Considering that a large number of Mississippians still don’t believe COVID-19 is a serious virus and think of it as just another form of the flu, this shouldn’t come as a shock.

In fact, Mississippi didn’t even start mandating masks everywhere until Aug. 4, almost five months after President Trump declared a national state of emergency. Yes, the COVID-19 numbers in Mississippi are some of the highest in the nation, but why? As a very conservative, patriotic state, it makes sense that individualism runs deep in our culture. A recent spike in COVID-19 in Oxford was caused by none other than fraternities at the University of Mississippi ignoring guidelines and hosting rush parties.

It is safe to say that the United States has ultimately failed the test of altruism that has been bestowed onto the world without notice during the COVID-19 pandemic. In a time where we should all be coming together for the greater good of society, we have managed to make ourselves more divided than ever, and rugged individualism is the root of these issues. To be fair, rugged individualism is one of the largest parts of the American Identity, and it’s hard to break from a tradition that has defined the culture of the United States throughout its history so suddenly.

However, in times like these, we must consider the wellbeing of our neighbors, friends, family and strangers. Lend a helping hand and donate to organizations trying to support the homeless population during this pandemic. Be mindful and smart around people with compromised immune systems and please, please wear a mask. The only way to return to the life we all desperately miss is by working together, not by ourselves.