Phillips: Violence in the name of peace is not peace 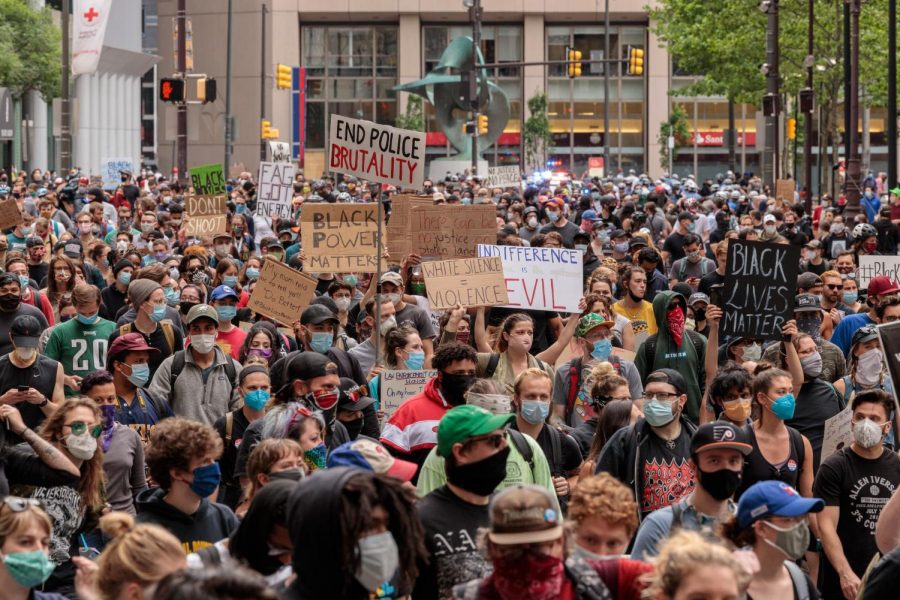 Last Sunday night, the streets did not sit in silence in Kenosha, Wisconsin. After a video of police shooting Jacob Blake seven times circulated around the internet, frustration and anger began to boil over. Citizens with signs and fist raised took to the streets to make his name heard. Their unified voices lifted in righteous anger as they screamed, “Justice for Jake” over and over. Peacefully, these protesters began their crusade in Blake’s name. However, the good intentions of these protests soon gave way to violent chaos.

Monday night, the second night of protest, citizens gathered outside the Kenosha courthouse and began throwing things at the police officers on the scene. They screamed the phrases “No Justice, No Peace” and “Justice for Jacob.” It has been reported  tear gas was deployed on these protesters. At 11 p.m. fire reports began to roll in. Buildings and cars alike blazed downtown as protesters roamed the streets. Video footage from that night show what appears to be people looting store fronts as they rampage through the city. Innocent citizens stood by powerless as they watched their businesses and personal property destroyed in the pandemonium of the moment. This destructive chaos is counterintuitive. Instead of making Blake the main focus, they dominated the news with stories of protesters burning cars and buildings. People don’t concentrate on the matter of justice when distracted by violence.

Mayhem of this caliber allows for hateful supremacists to blend in with the crowd and deliver what  can only be defined as cold-blooded murder. Tuesday night, a 17-year- old boy, with an illegally possessed gun, fired shots into a group of protesters. Two people lost their lives and another was injured. Law enforcement suspect the offender is Kyle Rittenhouse. The acts of this boy are nothing but despicable. It is appalling that police would shoot an unarmed black man seven times while simultaneously letting an active shooter stroll right past them.

I cannot help but be reminded of the protest in Jackson, MS, three months ago. On June 6, outraged Mississippians donned masks and took up homemade signs. In ninety degree heat, they chanted until they became hoarse. They stood in front of the Governor’s Mansion and State Capital demanding justice for George Floyd and others who died at the hands of prejudiced police. As they marched through the streets,  they did not resort to violence. Those who organized the protest spoke with reason and level heads. A leader of the march, Jarrius Adams, said, “We welcome you to build with us beyond this movement in a sustainable way. Truly nurture us and make investments in us as stewards of our collective future. We hope that you can show up for us now and beyond.”

These protesters pushed through a major topic of controversy, the Mississippi Flag. During the June march, one of the mantras they shouted was “Change the Flag.” On June 28, Mississippi history was made as the bill to change the flag passed. The demeaning emblem of the confederate flag finally being removed, has made another step in the direction of healing. This victory is all due to the peaceful protestors that marched earlier that month. This shows that peaceful methods speak volumes.

Violence breeds more violence. When riots break out, they take attention away from the reason they march. People begin to see protesters for Black Lives Matter (BLM) as volatile, selfish and detrimental. The destruction of property and the looting bring attention to the movement for all the wrong reasons. Their message gets lost in the madness. This environment makes it easy for despicable racists and those with malice towards members of BLM to camouflage themselves and murder and hurt innocent protesters, not to mention the devastation caused to innocent bystanders. Citizens’ cars, businesses and homes have been destroyed all over the nation. Blacks, Whites, Latinxs and so many others have had to watch helplessly as their livelihoods went up in flames. Violence in the name of peace is not peace.

As the protests in Mississippi have shown us, peaceful and reasonable practices work. So, I beg you, continue to raise a sign. Keep raising your voice. Persevere in spreading awareness.  Persist in the fight for the lives of those we lost too soon. Jacob Blake, George Floyd, Breonna Taylor, Ahmuad Arbery and the names of so many others must be heard. The battle for equality and justice has not ended. Violent methods must be abandoned. We must fight with passion and create concord.