Patel and Snodgrass: Bring the spotlight back to climate change 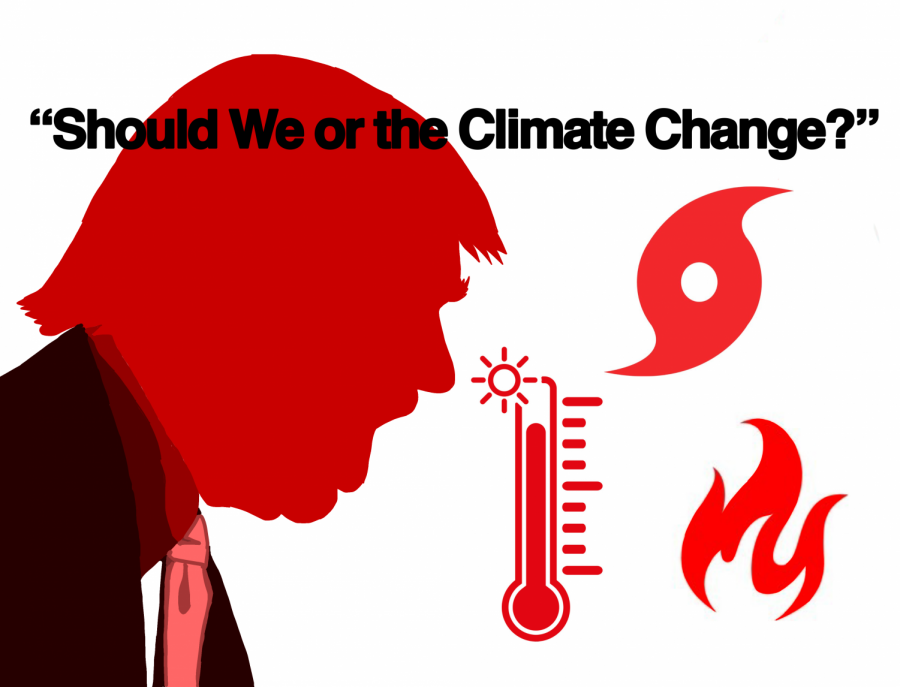 President Trump has disagreed with the severity of climate change during his time in office.

With the current global pandemic still taking over a majority of news, the spotlight for problems in the world has shifted away from climate change for a while. This does not mean it isn’t still a big problem; if anything, it is more relevant now than ever as global warming actually increases the likelihood of pandemic viruses.

Currently, wildfires are blazing in California and two tropical storms (one of which was a category 4 hurricane) have ravaged the Gulf Coast. Even with more and more evidence the climate is suffering, White House Administration has only rolled back environmental protections. It is past time to take action for the climate.

Warmer global temperatures change animals’ habitats and thereby increase the chances for a virus will be transmitted from animals to humans. This increase in novel viruses can then lead to global pandemics, much like the one we are currently experiencing because humans have no immunity built up against them. Mississippi in particular has been severely impacted by COVID-19, and we can expect future viruses to have a similar damaging effect. We need more comprehensive education on climate issues like this one so the general public can act accordingly. Until climate change is stopped, we can only expect more novel viruses to emerge.

One would think a global pandemic would be enough good news for America, but with climate change being ignored yet again, California decided to give a nice reminder. As of Aug. 22, 2020, the enormous wildfire in Northern California became the second largest in the state’s history. It may not hold its title much longer though, as many climate experts say this decade is to be by far the worst in history thanks to the record high temperatures caused by climate change.

President Donald Trump also declared these fires as a major disaster, so victims are able to access federal relief funds. Personally, we believe this is very ironic, considering the fact that he has convinced himself that climate change is a hoax, yet experts say it’s the main cause of these fires. At this point, all the money used as relief aid could have been used years ago for climate change. Even more ironic, just last November Trump threatened California’s governor, Gavin Newsom, concerning wildfire management. He told Governor Newson to “get [his] act together.” Newsom, who understands climate change and its effects on wildfires, responded with “You don’t believe in climate change. You are excused from this conversation.” If only our president would look at the statistics and effects, many people would be more conscious about this growing problem.

Meanwhile, hurricane Laura has devastated the coasts of Louisiana and Texas. Winds reaching 150 miles per hour and peak surge flooding at 21 feet place Laura in the top ten strongest hurricanes ever to hit the United States. 1,500,000 people were placed under a mandatory evacuation order and 910,000 were left without electricity. Although not directly hit, Mississippi also experienced some damage and heavy rain. Many Mississippians who prepared for the hurricane said they counted their blessings. To them it was pure luck that the hurricanes missed a majority of the state. However, this may not happen the next time a hurricane is in the Gulf. Storms of high intensity are becoming increasingly common in the modern era due to rising ocean temperatures caused by climate change.

As the Earth is warming up, so is the ocean water–where hurricanes form.  Warm water fuels the hurricanes, making them stronger. Scientists predict new categories may need to be added to the Saffir-Simpson scale to accommodate harsher storms than ever seen before. Considering the extreme damage that high-intensity tropical storms bring to the table, we find it odd that we as a nation aren’t  putting more effort into combating climate change–in fact it’s quite the opposite. Since his election, President Trump has pulled the U.S. out of the Paris Climate Agreement, repealed a rule that kept companies liable for emissions over a legal limit, decreased vehicle emissions regulations and more. His careless actions have the potential to cause real harm to people, the environment and the economy, but they’re par for the course from someone who continually puts the interests of corporations and billionaires over all else. The US Congress’s inaction with regards to climate regulations has only exacerbated President Trump’s effect. Congress needs to do their job and make laws in the people’s best interest.

Climate change is real, it is happening now, and it needs to be stopped. We must call on our politicians to do their jobs and listen to science before it is too late. If not, we Mississippians (as well as the citizens of the whole of the United States) are in the path of many more natural disasters.