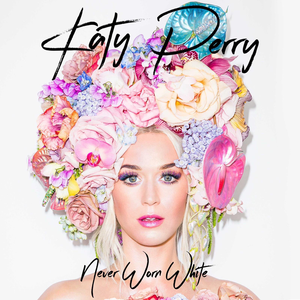 Surprise! Not only is Katy Perry pregnant, but she’s also relevant again! Honestly, I can’t tell which is more surprising.

35-year-old singer-songwriter Katy Perry revealed her baby-bump for the first time in her recent music video “Never Worn White.” Perry later took to Twitter to announce that, yes, she is actually pregnant with her fiancé and longtime partner Orlando Bloom to whom the song was devoted.

“Never Worn White” is an absolutely gorgeous music video. In this dreamy video, Perry wears a beautiful white wedding-esque dress and later a literal bouquet of flowers because she wants to make it absolutely obvious that this is about her getting married, if you couldn’t tell from the lyrics alone. Beautiful pinks and blues adorn the screen as she sings of her fears of getting married and “wearing white.” With an angelic glow adorning her presence, she finally reveals that she is expecting and looking forward to her future with Bloom at the end.

Wait, hasn’t she already technically “worn white” because she was previously married to Russell Crowe? Yes, but also no. Perry and Crowe married in 2010 and then subsequently divorced after only fourteen months together. During the ceremony, Perry broke the social norm and actually wore a grey dress, which is why she technically has “Never Worn White.” Still really confusing, though.

While the video is a work of art, the music doesn’t really set the same standard. It’s good, but it’s not great. Perry has been known to churn out goofy but sensational singles such as “Roar,” “Firework” and “Teenage Dream” with ease that it has basically become her niche. “Never Worn White” is essentially a ballad, replacing her usual pop, upbeat sound with piano and strings. It’s different, sure, but it just doesn’t seem like her.

It’s very basic, honestly. Perry is known for her original and quirky songs, and this was really a let down from her standard music. Its primary service seems like it’s just to say, “Hey guys, I’m back! Look at me, the girl who was relevant in 2010! Did you forget about me? Because I’m back!” Besides being a host on American Idol, we haven’t seen much of Perry until she does something problematic, which is pretty often.

Perry hasn’t been on the music scene in a while as well, with the last time she dropped a single being last October. Could this mark a return of the once Queen of Pop? Well, maybe if she would actually stick with pop and not do something so out of her brand.