Editorial: Bernie Sanders is what Mississippi, and America, needs 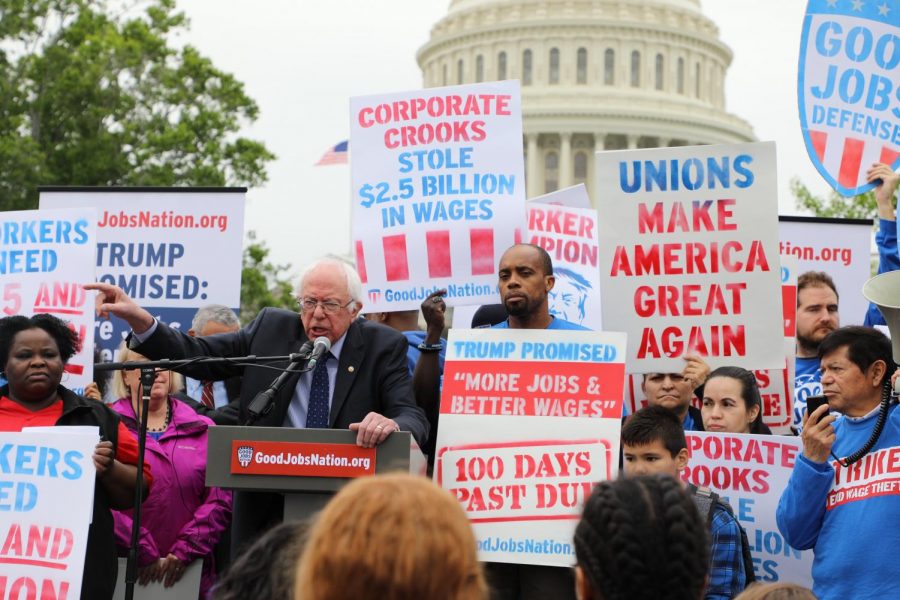 In both 2016 and 2020, Bernie Sanders advocated for the same message that has drawn the attention of many voters in Mississippi.

Disclaimer: The Vision is edited and produced by students attending the Mississippi School for Mathematics and Science. The views expressed are solely those of the student editorial staff and do not necessarily reflect the opinions of MSMS or its administrators, faculty, newspaper adviser or other staff.

“The Vision” editorial staff has voted overwhelmingly to endorse Senator Bernie Sanders for the Mississippi Democratic Primary next Tuesday, Mar. 10.

Mississippi is an interesting state. Though it would undoubtedly benefit from a plethora of Democratic policies, such as increased funding into education and the expansion of government welfare programs, Mississippi stands as a devout brick in the Republicans’ southern firewall.

Furthermore, as explained by “Jackson Free Press” writer Donna Ladd in her discussion with “The Hate U Give” author and Mississippi native Angie Thomas, the Democratic Party of Mississippi and, by extension, the Democratic Machine that persists within Mississippi, is fundamentally broken. “I’ve talked about this for years now,” Ladd wrote. “A timid, closed groupthink infects the Mississippi Democratic Party from the top, especially among the white men who traditionally control, fund and strategize for it.”

Democrats in Mississippi, who failed to capitalize on their best chance to retake the Governor’s Mansion last year with former AG Jim Hood, seem incapable of building a diverse coalition of rural working-class Mississippians, African-American Mississippians, Hispanic Mississippians and LGBTQ+ Mississippians–which is where Sanders comes in.

Sanders has spent the entirety of both his 2016 primary run against Hillary Clinton and his 2020 primary run on one message: revolutionize the system to make it work for the working class. This message has drawn in the exact coalition that the Mississippi Democratic Party is incapable of producing. Sanders has the capability to draw in the disenfranchised and frustrated voters all across the state that have felt left out from the Democratic Machine of Mississippi.

This coalition isn’t just because of Sanders’ working-class oriented message he espouses across the country. It stems from his consistency over the years and his policies focused on helping out the average American, be it through revitalizing rural America or his infamous position of providing universal health care under Medicare for All. Sanders led the opposition against the disastrous and ineffective War in Iraq, which nearly 8 in 10 Americans now view as wrong, and which will undoubtedly go down as one of the worst foreign policy decisions made in American history, costing the lives of nearly four and half thousand American service members’ lives.

Bernie Sanders has also stood ardently for Social Security and other government welfare programs such as Medicaid and Medicare while his current top Democratic rival for the nomination, Joe Biden, has fought in the past to cut those vital government safety nets and has refused to acknowledge that record in the current primary contest. In a state like Mississippi, where in 2012 nearly a third of the population of the state was over the age of 50, these issues matter.

Sanders fought back against trade deals such as the Transatlantic Trade and Investment Partnership (TTIP) and the North American Free Trade Agreement (NAFTA), which caused the mass migration of American jobs from the factories of the workers Rust Belt to us here in the Sun Belt. To win back the White House against Donald Trump, whom Sanders views as the “most dangerous president in American history,” Democrats must convince the voters in the Rust Belt, who flipped from serving as a Democratic stronghold and ‘Blue Wall’ to delivering Trump the victory over Hillary Clinton in 2016.

Time and time again, Sanders has shown possession of a unique foresight that is often overlooked. However, that foresight is useless without progressive, bold and well-thought-out policy plans. Thankfully, Sanders has all of the above. Sanders has an individual page on his website detailing an intricate plan to revitalize rural America, which would undoubtedly help bolster Mississippi’s agricultural-based economy. Sanders’ plan consists of investing in farmers across the country while simultaneously fostering investment to revitalize rural communities across the state.

With Mississippi being one of the only states in the country that has yet to expand Medicaid and Medicare under the Affordable Care Act, 12 percent of Mississippians remain uninsured. It is time that Mississippi and America join the rest of the world and guarantee healthcare a basic human right.

Now, there are many valid arguments when it comes to Sanders’ electability against Trump. Sanders is a self-identified democratic socialist, a mainstream political and economic philosophy in European countries. The term ‘socialist’ has been used as an attack from the Republicans for almost the entirety of the 21st century, and that attack has seemed to be adopted by Democratic moderates as well. While, yes, Sanders identifies with this political thought, his policies and positions are not very radical. In fact, all of his major policies are supported by a majority of the American people. 70 percent of Americans support a government-run single-payer health care system such as Medicare for All which removes private, for-profit based insurance companies. 58 percent of Americans support tuition-free public college and the elimination of crushing student debt. Furthermore, Sanders has consistently outperformed Trump in poll after poll and Sanders carries a strong, blue-collar, working class-oriented message that the Democrats need to take back states like Michigan and Pennsylvania and finally defeat Donald Trump.

One of the recurring arguments against Sanders’ platform is the cost. Is it going to be expensive? Yes. Can it be paid for? Absolutely. The Sanders campaign recently released a series of plans to pay for each and every one of his major policy positions, including Medicare for All, tuition-free public college and the Green New Deal.

While yes, individuals who make over $250,000 a year will begin paying more taxes proposed in Sander’s progressive tax rate, the real weight of the taxes will be placed on the top section of the upper class, who have consistently gotten away without paying their fair share in taxes under the Trump administration and many more preceding it. In 2019, Amazon paid $0 in federal taxes after making a profit of over $10 billion.

The average Mississippian, who only makes $44,717 annually, will not be faced with the bill that comes with Medicare for All. In fact, the family that does see an increase in their taxes will actually save money, as they would no longer be required to pay premiums, copays or deductibles. According to Yale University, under a Medicare for All plan, Americans will save $450 billion and prevent 68,000 needless deaths from under or no insurance.

We have only touched on a bare few of Sanders’ policies. So many more serve the potential of bettering life in Mississippi and the U.S. Simply removing Donald Trump from the office is not enough. Donald Trump is not the disease, he is a symptom of the disease. That disease that is ravishing the working-class families of Mississippi and the Rust Belt and everywhere else across the country is a disease of despair. It is not enough to make small and minute changes to the system. The system as it stands now gave us Donald Trump, and if we run a candidate other than Sanders in November, we stand the chance of giving Trump an easy path to victory against an unenergetic candidate with no real movement of support. Conversely, even if we were to beat Trump with a non-Sanders candidate, we stand the chance of returning to a system that the American people have deemed as not working for them and a system they have deemed a failure, which poses the threat of giving us another Donald Trump down the line. We have to implement bold, inclusive and strong policies to secure our better future.

If Sanders does end up securing the nomination and faces off with Trump in the general election this November, he will more likely than not win Mississippi. However, it is simply too late to sit on the sidelines and let the Magnolia State wither away day by day. When Mississippians start voting in their best interest, when the Mississippi Democratic Machine begins to make somewhat of a diverse coalition and when Mississippians like you vote for Bernie Sanders in the Democratic Primary on Mar. 10, maybe then we can begin to pick up the pieces of our state and create the future we want to see for our children and grandchildren.