Students, RAs explore interest in bringing basketball back to campus 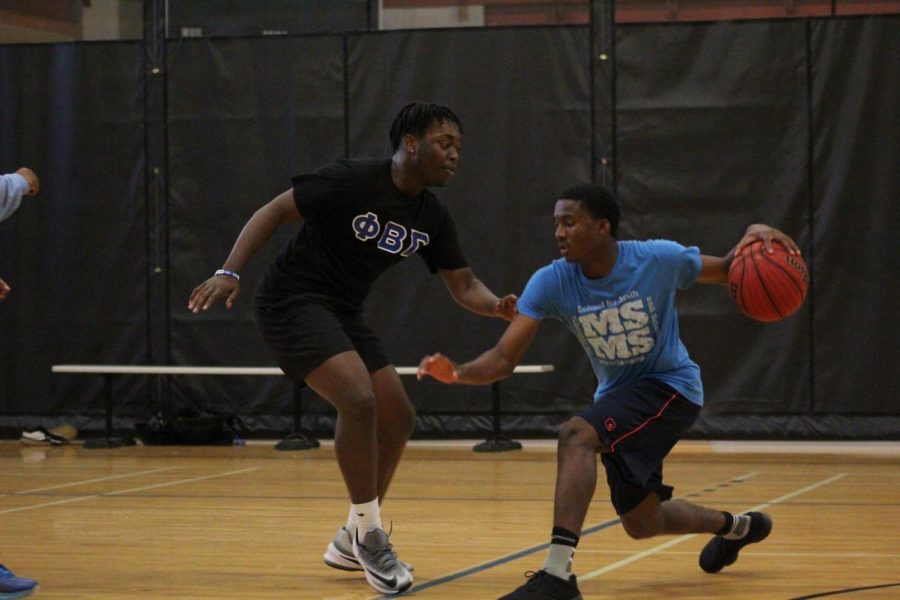 Frazer Hall Resident Assistant Jaquon Snow recently started a petition to bring basketball back to MSMS. Created only last week, it has already received over 60 signatures, more than one-fourth of the student population.

Though Snow started the petition, first-year Frazer Hall Resident Assistant and member of the MUW basketball team Jonte Moultrie would like to be the coach. Snow originally got the idea for the petition after a chance incident.

“One day I was just in Stark [Recreational Center], and I noticed a group of 10 MSMS kids playing basketball,” Snow said. “They were really playing, running drills and everything. Just watching them play drove me to start this petition.”

Snow expanded on his reasoning on why he felt a team was necessary.

“Basketball could really be an outlet for a lot of students,” Snow said. “Some students could really just use a team as their backbone because you never know what they’re going through.”

“They go through a lot of stress, and basketball can really help with that,” Moultrie said. “This school doesn’t have to be all academics because sometimes kids just need a break.”

MSMS previously had a basketball team up until 2008 and coached by current staff member Valeria Scott, but had to end due to several issues.

One main problem was that the team struggled to stay competitive after moving up a division to become a 3A high school in MHSAA athletics.

“Honestly, some games, our girls team would literally get thumped,” Scott said. “I enjoyed the time but not the defeats.”

However, Scott sees the team as having been a positive influence on the school.

“Having a basketball team only increased interest in MSMS,” Scott said. “It was really just a great experience. It was truly special.”

Some students advocating for a team pose the argument that it would increase interest in the school for athletes, especially those on the fence about coming due to the lack of sports teams.

However, a counterargument is often posed that MSMS is a residential high school for the academically gifted, and students’ priorities should rest mainly in academics.

Junior Joshua Murphy, president of the Basketball Club and advocate for starting a team, addressed these concerns.

“That argument just makes no sense at all to me. This school is clearly about learning, but there’s nothing that says you have to be solely academic and have to study all day and do nothing else,” Murphy said. “People need breaks, and for me, basketball is the best way to cope with stress here at MSMS.”

Murphy played varsity basketball at Picayune High School before coming to MSMS and stressed how many students have to give up sports to come to MSMS and how difficult that can be.

“That was really tough for me,” Murphy said. After my last basketball game in March, I knew that would be my last time taking off the jersey. I knew it was my last practice. Saying goodbye to my teammates was probably the toughest part.”

Moultrie expanded on Murphy’s experience by sharing his thoughts on the lack of a team.

“Kids that come here play all kinds of sports,” Moultrie said. “I really think it hurts students who want to apply when they say we don’t have a lot of sports teams.”

The Black Student Alliance (BSA) has even allied with the Basketball Club due to their belief that the lack of a team often dissuades African males from applying. For reference, African American males make up 18% of the Mississippi population but only compose around 5% of students at MSMS.

“From very young ages, sports like basketball and football are forced upon black males,” BSA President Cameron Thomas said. “Though this has brought about many negative stereotypes in the black community, it doesn’t hide the fact that sports, especially basketball, are an integral aspect of the black male experience. A basketball team would most definitely increase the number black male applicants.”

“Basketball is a major sport,” Alexander said. “One of the main challenges is staffing and commitment. The biggest challenge is facilities because MUW volleyball and basketball use Stark during the season. If people really want a team, it’s possible, but I’d have to give it a lot of thought because it’s difficult to get something of that magnitude off the ground here.”

The petition is still merely a statement of interest in creating a team, but the underlying desire for a greater athletic presence at the school is unlikely to subside regardless of the result of the petition. The outcome of this petition will likely be determined by the MSMS administration in the near future.