Blu Knightz step up their game 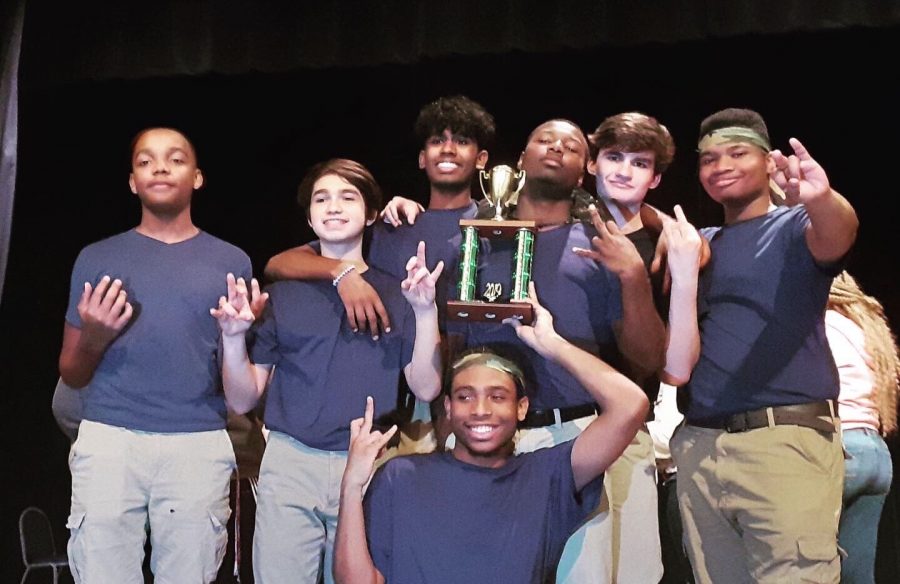 Rent Auditorium was a full house this past Saturday, Nov. 17, as 10 step teams gathered from across Lowndes County for the step show competition. The Blu Knightz, MSMS’s all-male step team, placed third of ten teams. They were one of the first to perform that evening and, quite frankly, the best act of the night.

As this was the first step show I’ve ever attended, I didn’t know what to expect; however, I knew enough to anticipate a lot of clapping and stomping. The first few performances were okay, but there wasn’t a lot of step; it was mainly just conventional dancing.

When the Blu Knightz took the stage, shouts of support from MSMS students in the audience rang throughout the auditorium. We all waited in anticipation to see what they had in store. The theme of their act was military, with Blu Knigtz Co-President Niamke Buchanan as their general.

For Buchanan, this wasn’t his first time being in front of a crowd. He was excited for this year’s step show, as the team had practiced hard and created their own step routine. He stated that compared to last year, the team has put in a lot more time and effort this season.

“Cameron and I essentially started from scratch. We put a lot of work up front, finding, learning and making steps over the summer and during August,” Buchanan said. “I think we’ve got a good group and a great base.”

Every year the team starts with new members who have likely never stepped before. The other Co-President of Blu Knightz, Cameron Thomas, has been stepping for four years. Not many people know about the step team coming into MSMS, so his passion led him to expose others to step, which is a gratifying opportunity for him.

Before the show, Thomas gave a pre-show speech to hype up the team.

“I get my energy from the crowd. However, I knew my juniors were nervous so I gave a prestep speech to boost their confidence,” Thomas said. “They went out and gave their all. I couldn’t be more proud.”

The team felt like they were deserving of second place, but it was understandable with a brand new team. Regardless of the score, they had a performance that was well put together, with a captivating theme and act that went perfectly with it.

As they stepped, their motions were perfectly in sync, and they moved together as one. Their enthusiasm and spirit differed from the other teams, and you could see their hard work definitely paid off.

“Seeing the new members learn everything Niamke and I threw at them and bring it all together in a very entertaining show was more rewarding than any trophy,” Thomas said.

The only team members with prior step experience were Buchanan and Thomas. All of the five other members were new to the game. The Blu Knightz sponsor and Frazer Hall Director Hansel Jackson was very proud after all of their hard work. He had given his advice here and there, but the team mainly came up with all of their steps and skits.

Junior Joshua Murphy didn’t know what to expect joining the Blu Knightz, but he said it’s been a great experience so far.

“It’s been a lot better than I expected,” Murphy said. “I went into it thinking we wouldn’t take it seriously, but after all of those long practices and performing together, it’s so much more than just a team.”

The Blu Knightz will be preparing for future shows next semester, with an event potentially being the national step qualifiers. Judging from what I saw the night of the step competition, the step team has a bright future ahead of them.