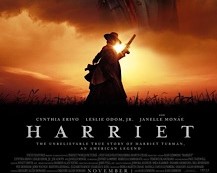 Courtesy to the distributor of the film, Focus Features, the publisher, or the graphic artist.

The U.S. has always had a way of romanticizing its history, whether in the colorful fireworks on Independence Day or the remaining Confederate monuments spread throughout the South.

“Harriet” is a once in a decade take on one of the most respected figures in black and even American history. Though it is a beautifully written, powerful film about Harriet Tubman and her journey towards freedom, it diminishes Harriet’s true strength by giving importance to characters who historically did not have much relevance or did not even exist primarily for entertainment purposes.

Director Kasi Lemmons chose to add a fictional black slave catcher, Bigger Long (Omar Dorsey), to the biographical film. I personally do not have a problem with the twisting of reality for the pleasure of the audience. The audience wants to be entertained by a good story. If they want straight facts, then they should watch a documentary.

The problem arises, however, when the historical inaccuracies negatively portray a group of people–especially a black man in a movie about a black historical figure.

After watching “Harriet,” you would probably think that black slave catchers were conventional in Civil War America. However, there were little to none of them. Lemmons admitted it herself in an interview:

“You could buy a farm for $400 and feed your family and live a good enough life. All you’d have to do was go out and capture one or two runaway slaves and you were set. They were very uncommon but they did exist, and it was a problem for the community.”

White slave owners feared the uprising of African Americans, so the chance of them giving a black man a gun to go out and catch runaway slaves with the possibility of him turning on them was immensely low. Slave catchers were normally white men. In fact, there were even more white females in slave catching than black men.

The film also adds to a stigma that the black community has been trying to rid itself of for years: violent black men who bring about their own death. It tried to normalize the diverse aspects of slavery, implying everyone played a part in some way. Though this is true to an extent, I feel that a portrayal of the past should be representative of the normalities in the time period. “Harriet” amplifies a rarity as if it was normal.

The film did an amazing job of portraying Harriet Tubman (Cynthia Erivo) as the strong and driven woman as she was in real life…until it did a terrible job.

In order to save Harriet, a white man (whom they also gave unnecessary importance) shot Bigger Long. Not only did they add the fake and violent black male in the film but they also had to throw in the “white male hero” in a scene that never even happened in real life.

They hit a triple wammy by diminishing her character, adding to black stigmas and having a white man save the day in a (I remind you again) movie about a black historical figure.

This is where the movie fell short for me. As a black man, I walked in the theater expecting to feel empowered by my people’s history, yet I left realizing that times have not changed as much as I thought they had.