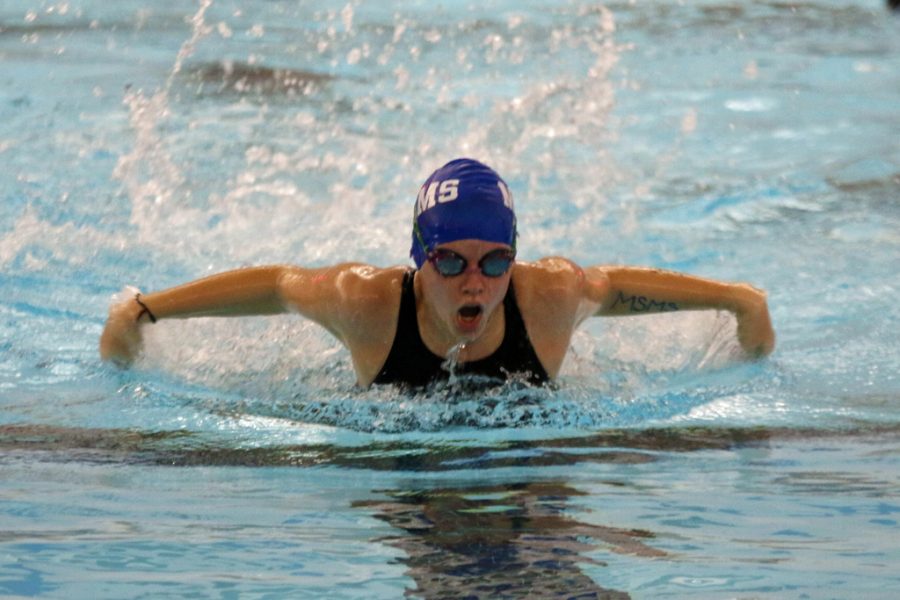 Samantha Broussard competes in the 100 meter butterfly at finals, vying for first place.

Broussard, the team captain, competed in the 100 yd Fly, placing ninth, and 100 yd Back, placing sixth. Both finishes qualified her for the state competition in the respective events.

Predicted to be a tight race, the 50 yd Freestyle raised tensions and Cooke became nervous.

“It was all nerves,” Cooke said. “But the thing is, I knew that nervousness was energy, and I just had to focus it.”

To qualify for the state meet, swimmers must finish in the top six to receive an automatic bid. The next four fastest times from the north and south meets combined also qualify.

Camille Newman placed 12th in the 100 yd Breast, nearly meeting the cutoff. Mabrie Woods finished in 11th place in the 100 yd Back, only one place from meeting the standard for the state meet. However, she dropped nearly two seconds off her time and expressed her emotions during the meet.

“Afterwards, I felt like death,” Woods said. “I gave it everything I had and got a personal best time. Everyone worked really hard and I couldn’t be prouder.”

Due to issues with the pool on campus, the Blue Waves’ swim team has been taking a bus to an outdoor pool in New Hope to practice. The outdoor pool combined with the recent lower temperatures prompted Woods to reflect on her most memorable practice.

“We’ve had a lot of fun together, and we even listened to Christmas music during practice one day because of how cold it was,” Woods said.

Cooke also attested to the fun of the season.

“The pool might be really cold, but that’s half the fun of it,” Cooke said. “The day we were playing Christmas music, I had to scream to force myself to get in because it was so cold.”

Although several members expressed positive thoughts on the season, Broussard was not 100 percent satisfied.

“We did pretty well considering the circumstances, but we honestly could’ve done better,” Broussard said.

Regardless of whether the team maximized their potential, Woods still felt that she learned a valuable lesson from this season.

“The most important thing I learned this season is that if you work hard, you can improve,” Woods said.

Broussard and Cooke are set the swim at the state meet in Tupelo on Saturday, Oct. 26.