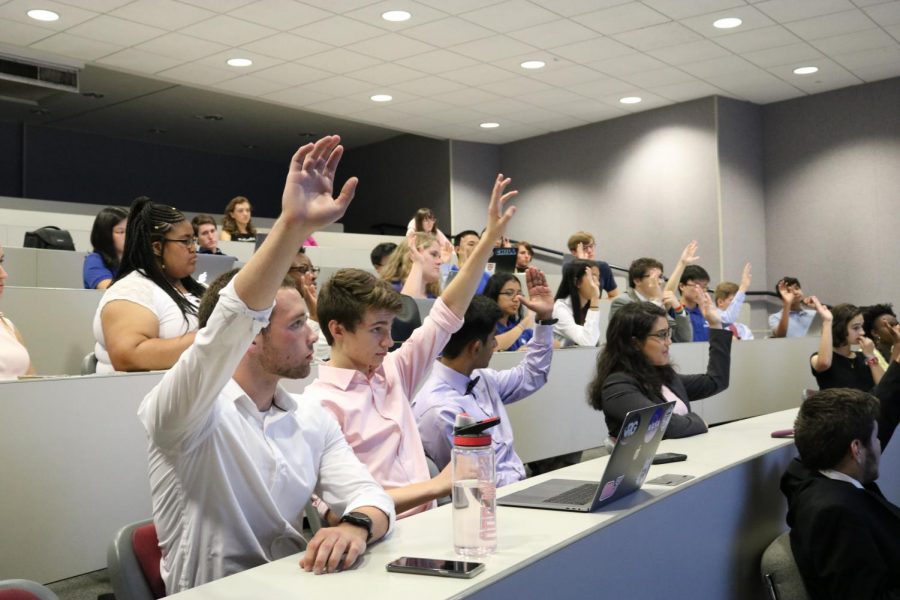 Senators vote on whether or not they agree with the proposed bill.

Senator Wan’s bill, which had been presented at the previous meeting and tabled for further discussion, was the first bill to pass at the meeting on Tuesday, Sept. 24.

After a very brief period of debate, the Senate voted unanimously to pass the bill.

“I think the Senate as a whole compromised pretty well, and everyone seems open to new ideas,” Wan said. “I was very pleased with how the bill ended up.”

“The current wording in the handbook is very ambiguous,” Flowers said. “Currently, if you forget to make up work service, you get a level II violation, but with this bill, you only get a level II if you have a failing grade in work service, so I think that makes it a lot more lenient.”

After a period of debate where several senators disagreed with and proposed amendments to Flowers’s bill, a vote was called, and it passed with exactly the needed three-fifths majority.

Many senators, such as Michael Lu, approved of both bills.

“I think Senator Wan’s bill is an excellent bill because the risk of oversleeping and getting a tardy is very high,” Lu said. “I also think that Senator Flower’s bill was necessary due to the confusion on punishments for missing work service, so I’m glad both got passed.”

These bills will be sent to administration for approval, and the next senate meeting–open to all students–will be held at 6 p.m. next Tuesday, Oct. 1.