Students kick off 30th annual Tales from the Crypt 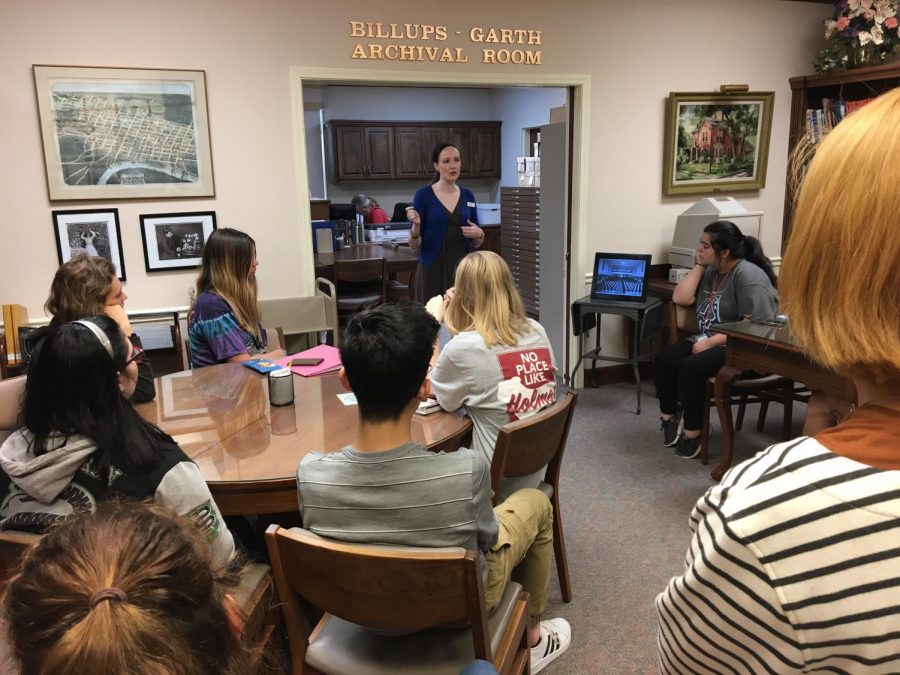 Students sitting in library orientation to prepare for this semesters Tales research.

In the past week, students from Chuck Yarborough’s U.S. History: Tales from the Crypt (Tales) classes have toured Friendship Cemetery and the Columbus/Lowndes Public Library for orientation into the  research, writing, performance and service-based project.

Tales is an award-winning project started in 1991 by former MSMS teacher Carl Butler that focuses on research through various archives and documents. Afterwards, students convert their research into a performance event that sheds light on bigger constructs of the past through a series of monologues that highlight prominent aspects of a person’s life.

The process begins with the students selecting a name from a list of potential and un-researched subjects buried in Friendship Cemetery. From then on, the students have one main goal for the first semester: try to uncover as much information about this person, so he/she can piece together a story that tells more about what life was like in the past.

The classes traveled to the Columbus/Lowndes Public Library on Friday, Aug. 16, in order to learn how to use all of its facilities properly. The library has access to a variety of records on file in the Department of Archives, which is fully accessible to all Tales students throughout the school year.

“I am looking forward to actually going to the library and researching,” junior Brenna Luff said.

On the following Monday, the students took their first steps on the grounds of Friendship Cemetery. They located their tombstones and took note of relatives, birth date, death date and other basic facts. They also scoped out what could be their potential “stage” in months to come.

“It was really nice seeing people that died over 80 years ago and all of their family with them,” junior Colin Gordy said.

Though most were skeptical of walking around in a cemetery, some students actually enjoyed their time among the graves.

“It was actually really nice,” junior Weslyn McMurrin said. “I found some trees to sit under. I was not scared, but I was comforted by the dead souls.”

Yarborough took over the project in 2003 and has, since then, brought the project up to international recognition, including 2005’s Governor’s Excellence in the Arts Award and publicity in major magazines like The New York Times and The Atlantic.

“I’m pleased that even after 30 years, Tales from the Crypt continues to appeal to MSMS Students as well as gaining widespread community support,” Yarborough said.

“Ancestry.com is a life saver,” Troup said. “Even if you don’t find a lot of information on your person, make do with what you have and be creative.”