Bowles: In God We Trust? 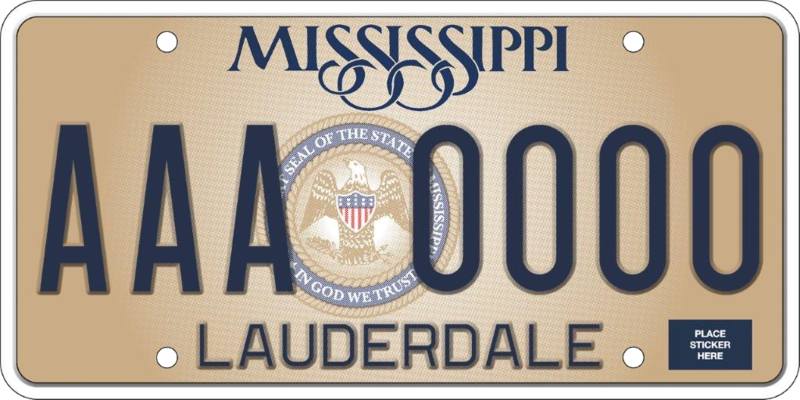 The most recent Mississippi license plate designs incorporates the state seal, which states, "In God We Trust."

I could not be more disheartened over the new Mississippi standard-issue license plate, and it is over one phrase: “In God We Trust.” Many Mississippians do not believe in any deity, let alone trust in one; therefore, it is morally objectionable to make them use a license plate claiming to trust in a god in which they don’t believe.

In Mississippi, it seems that religion is more important than human rights and the Constitution itself. Through their newest license plate, they are forcing religion onto non-believers, which is just another example in a long list of the state’s history of resisting change and acceptance of non-traditional groups. There is even a law in Mississippi that says, “No person who denies the existence of a Supreme Being shall hold any office in this State.” That is a clear example of religious bigotry, just like forcing people to promote God on their license plates.

If people want to avoid promoting Christianity on their state-mandated license plate, they will be charged money to buy an alternative, which is essentially a tax on non-Christian residents. People who don’t want to display the religious reference don’t have the option of covering it because it is a misdemeanor punishable by a fine of $25. As a result, atheist groups have even been threatening to sue the state over their new standard-issue license plate.

Government of the State of Mississippi The source code of this SVG is valid.This vector image was created with Inkscape-default. [Public domain]

Not only do some Mississippians think it is acceptable to discriminate against non-Christian residents, but Mississippi politicians are also using it to pander to their bases. Gubernatorial candidate–and current Lt. Gov.– Tate Reeves (R) is even defending it in campaign advertisements.

In a recent ad, Reeves said, “Mississippi has a brand new license plate, but the out-of-state liberals hate it. It’s because of these four words: ‘In God We Trust.’ I know Mississippi’s values are Mississippi’s strengths.  Our next governor must defend our values every single day.”

There is absolutely nothing wrong with him or any Mississippian believing in God or multiple gods, but it is not necessary to believe in a monotheistic deity to be a true Mississippian. It is utterly disappointing that he supports forcing religion onto non-believers. That mindset is authoritarian in nature and contradictory to the ideas of liberty and small government that he claims to support.

In that advertisement, Reeves also said, “The liberals from California and Washington are threatening to take Mississippi to court.” According to David A. Noise, the leader of the American Humanist Association (AHA), one of the groups threatening to sue, this statement isn’t accurate. Noise stated,“The claim that the opposition is from outsiders is simply not true. We got involved in the issue only because numerous citizens of Mississippi contacted us about it. It’s a shame that some candidates apparently have so little to offer voters that they feel compelled to not only politicize the license plates but to do so dishonestly by claiming that only outsiders are objecting to them.”

I couldn’t agree more. There are many non-religious people throughout Mississippi, and blaming it all on “out-of-state liberals” is a clear example of demagoguery. The license plates should not be a politically divisive issue. The First Amendment clearly states that the federal government shall make no law promoting one religion over another or restricting the religious freedom of any group. All Americans that respect the Constitution should want “In God We Trust” off the standard-issue license place, or at least take away the extra cost for an alternative.

Other candidates, such as Treasurer Lynn Fitch, who is running for Attorney General, are also flaunting their support for these license plates in an attempt to garner votes. In a fundraising letter, Fitch said, “In Mississippi, we trust God. I voted to put that seal on our car tags.”

Separation of church and state is extremely important to the freedom of all Americans. If there were no First Amendment, people could be forced to go to a church, mosque or synagogue. They could be persecuted for being Christian, Muslim, Jewish, Hindu, atheist or agnostic. The founding fathers created this country with the idea of allowing people true freedom, and that includes freedom from promoting any religion. I enjoy my freedom to be religious or choose not to, and that is a fundamental part of the American ideal. That is why it is so disappointing these politicians are against allowing their constituents basic religious freedom.

Her Republican primary opponent, Mark Baker, said in a fundraising email that one of his top concerns is “fighting to keep ‘In God We Trust’ on our state license plates.” In 1977, the Supreme Court ruled that it is unconstitutional for the state “to use private property as a ‘mobile billboard’ for the State’s ideological message” and said that free speech guaranteed under the First Amendment gives individuals “the right to hold a point of few different from the majority and refuse to foster an idea they find morally objectionable.” These politicians are ignoring the Bill of Rights to force their beliefs on others, thus restricting their freedom. Apparently to them, Christianity surpasses constitutionality.

As of now, no group has officially filed a lawsuit over the issue. Whether you are religious or not, you should not support forcing your religious beliefs on others. If you really want to be free, then you would not support keeping the phrase on the license plates. Although I would rather the standard-issue license plate not mention God, I would even accept the reference if there were an alternative for no additional fee. Christians would be protesting in the streets if the standard-issue license plate made an atheistic reference, but because it is their own religion in a state where their religion is the default belief, all that can be heard is silence. We need to preserve true freedom and end this government promotion of religion as soon as possible.

As President John Adams once said, “Nothing is more dreaded than government meddling with religion.”