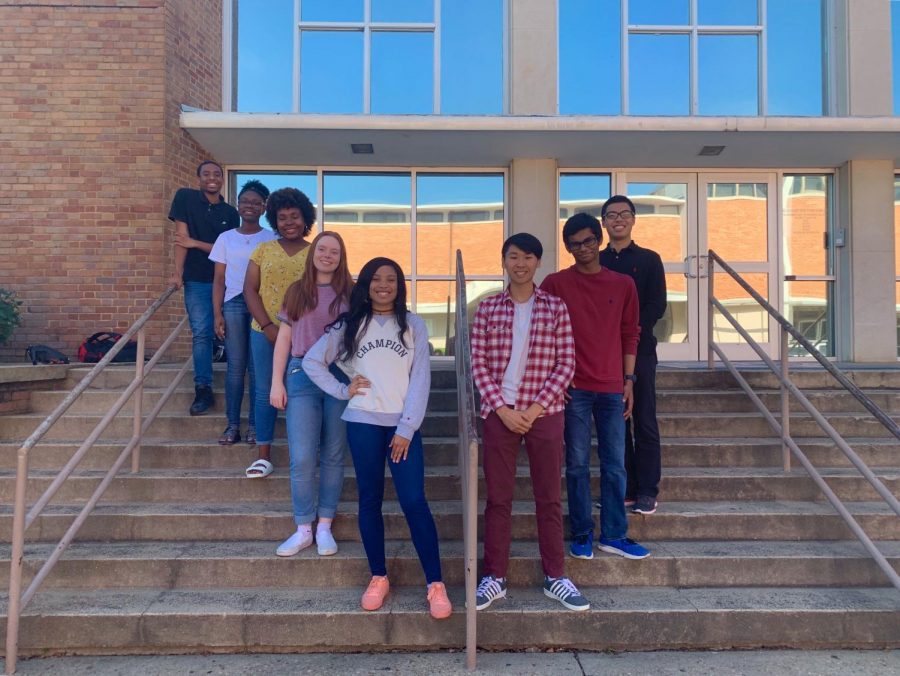 Last week, MSMS’s Class of 2020 voted in a highly competitive election for their class and SGA officers, leading to multiple runoffs. After a brief class officer interest meeting held last week, MSMS students raced to decorate the halls of Hooper in campaign flyers and posters, attempting to gain every last vote.

The results were released late today.

“I was really nervous about running, I had a lot of subconscious thoughts that became obstacles to me, and I also ran against two wonderful people,” Burch said. “I hope to influence my class by providing them with the idea that although they may be busy and focused on their future during their senior year, it is also important to make unforgettable memories with their peers and enjoy their high school experiences. I also hope that we can become even closer than we already are.”

Katelyn BookerCameron Thomas, Alisha Burch, and Amyria Kimble show support for each other in the campaign.

Burch was also class president this past school year.

Alden Wiygul was announced Senior Vice President for the Class of 2020.

“I chose to run for class vice president because I want to be involved in creating change at the school and leaving a legacy for the classes after us. I was really nervous even though I had experience running with speeches for various clubs. The classes after us deserve to benefit from what we do, so I hope we can create more fun traditions,” Wiygul said.

Alicia Argrett was re-elected as secretary for the senior class.

“I hope to continue doing fun things that bring the MSMS community together, such as candy grams. I hope to bring an encapsulating influence to the class of 2020,” Argrett said.

Junior and former Historian Reggie Zheng was also a candidate for the secretary position.

“I feel like every candidate is qualified in their own unique ways,” said Zheng. “They each have their own personal strengths and weakness, and I feel like that is important for a leader.”

Student Kresha Patel was among the other members of the Class of 2020 that voted in this year’s election. “I voted with my heart,” said Patel. “I voted for the ones that I thought will represent me the most.”

“I chose to run for Historian because I wanted to be in charge of keeping up with all MSMS seniors events, for some are quite overlooked. My campaign slogan was ‘Making Moments Memories,’ and that is most definitely what I have in plan for next year,” Thomas said. “I wasn’t really that nervous because I was the only person running, but I still chose to give a speech and campaign because I wanted people to know the quality of work that I will bring to the table next year.”

It was not just student body positions up for grabs as students also voted for the leaders of MSMS’s Student Government Association, with a total of ten candidates running for only three positions.

Ramkumar had been interested in running for SGA Vice President since the first Senate meeting.

“I chose to run because I thought that in utilizing my years of experience in legislative debate, I would be a qualified candidate who respected the office and knew how to maximize its efficiency,” Ramkumar stated. “I hope that I can continue to foster healthy debate over our handbook, and I intend on streamlining the Senate, to bridge the gap between representatives and constituents. I can only hope that my ideas regarding how I preside and how I conduct Senate will be useful in time.”

“I would like to engage myself more in the SGA in my senior year, and I feel the position as the SGA secretary can help the student body more by informing them on the changes made through the Senate,” Lee said. “I hope to use the position of the SGA Secretary to encourage the engagement in SGA by informing the students the essentials of the legislative progress.”