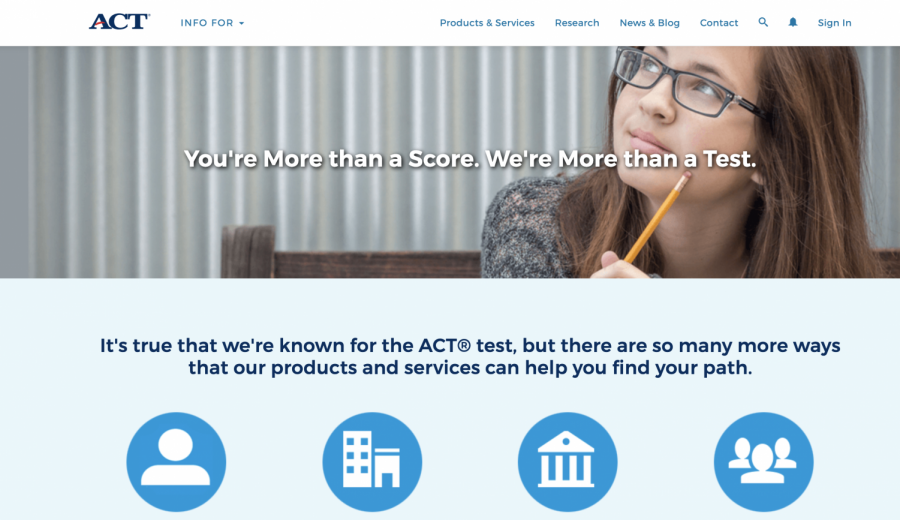 On Wednesday, February 20, MSMS juniors stumbled through the bleary 8:00 a.m. cold toward Hooper, calculators and number two pencils in hand, where a three-hour standardized test awaited with open arms.

The test in question happened to be the ACT, which used to be an acronym for “American College Testing” but currently no longer stands for anything in particular, other than the menacing and encroaching expectations of undergraduate studies.

Standardized test scores, like those dished out by the ACT, along with GPA and written testimonials (the most infamous of which is the Common App Essay), are all factors that contribute to whether an aspiring college freshman’s application to an university of their choice will be accepted or rejected.

For many MSMS juniors, last Wednesday was one of the dwindling number of chances they will get to take the ACT before they’re swept up in the flurry of pressure and strain that is college application season, during which they must mail their highest ACT score to colleges that will rate them in part by that number.

Time and time again they’ve been told that performing well on the ACT is vital to future success, but the question on many of the MSMS test-takers’ minds last Wednesday was probably this: Should a two-digit score be as crucial as to determine the next four years of a teenager’s life?

Debates on standardized testing usually result in passionate assertions on how the current system is faulty at best, especially among the recent test takers. MSMS junior Josiah (Jojo) Kaler, who reported plummeting willpower and energy after ACT testing, laid out many of the ACT’s transgressions, in particular, that many of the skills the ACT examines do not accurately measure a person’s ability to succeed in higher education.

He went on to proffer that none of said skills can be reasonably expected to be of much use in college, since most curricula require understanding cumulative and deeply-processed knowledge, instead of speedy regurgitation, as Kaler charges the ACT with.

“Your work ethic, time management skills, creativity and ability to learn are far better indicators of how well you will do in college,” Kaler went on to state. “None of these skills are measured by the ACT in any form or fashion.”

Kaler, who’s somewhat of an ACT veteran, as he’s taken the test six times so far, also mentioned that the last test appeared to be less difficult than his previous attempts. “However, this could also be a result of me getting smarter since the last time I took it,” he said, which brings to light another alarming aspect of the ACT: its predictability.

Junior Catherine Min, who described the atmosphere of her latest ACT as “caffeine-induced tiredness,” admits that the idea of the ACT serving as a universal benchmark measure of intelligence is useful, since state education systems across the country are not exactly consistent in terms of the quality of education students receive.

“Usually there’s a correlation between high ACT scores and higher GPA’s,” Min conceded. “However, the ACT is all about patterns, since each test doesn’t differ a lot, so if you know the pattern, you should be able to make a higher score. In that way, it cannot measure how smart a person is in school.”

Overall, juniors reported that this ACT was just the same as the other ACT’s they have taken in the past.

David Heson remarked that, “the math and science felt slightly harder than usual, but reading and English felt easier. On average, it was as difficult as most other ACT’s.”

According to Tiwaniya Tyler, “This test was somewhat as difficult as the others [I’ve taken].”

This raises a concern that the ACT is the exact opposite of foolproof, which makes its intention of measuring a young adult’s college preparedness null and void. In Tyler’s words, “With enough practice of certain tips and tricks, the average brain could earn a really good score, but fail to be prepared for college.”

Kaler’s opinions are in line, predicting, “You can put a few hours of studying in per attempt and take it a few times and get a great score on the ACT. This does not in any way show how well you will do in college.”

MSMS Junior Simeon Gates, who’s taken the ACT two times before Wednesday, called standardized testing “problematic” and indicated, “Although I’m not very educated on the subject, I think they’re given too much credit sometimes. They’re good for seeing what you know or need to improve on, but they’re not an accurate measure of intelligence or skill.”

Additionally, Gates hopes that “our education system changes so that test scores aren’t used to measure a student’s worth.”

Tyler expressed similar wishes, saying, “The most effective way of judging character would be to understand others the way you would wish to be understood.”

“[The ACT] actively benchmarks where you are, and you can spot your weaknesses,” acknowledged junior Hannah Kitchens, who’s also a two-time survivor of the ACT and cheerfully described the latest examination as “not awful.”

Kitchens continued, pretty much summing up the feelings of her other peers in moderation, “Multiple choice questions just aren’t a good way to measure what a person knows. Problems in life don’t give you answer choices. There are options, but they aren’t plain to see. Preparing for test like [the ACT] just teaches you how to rush through things and ignore the fine details in order to find the ‘important’ ones.”

While the ACT may be administered with good intentions, the general student consensus is that the test promotes skills that are useless in high-stress learning environments, where one must comprehend and retain information over long periods of time.

Additionally, the easy “pattern” of the ACT makes it straightforward to perform well on the test, downsizing its ability to be accurate measure of genuine intelligence. Going forward, however, and as the rage against this recent ACT subsides, juniors should keep in mind that standardized test scores are only a small portion of how college admission officers evaluate your abilities and that ACT scores pronounce nothing at all on your worth and intricacies as a person.