Day in the Life of a Wannabe Comedian (Victoria Gong ’19) 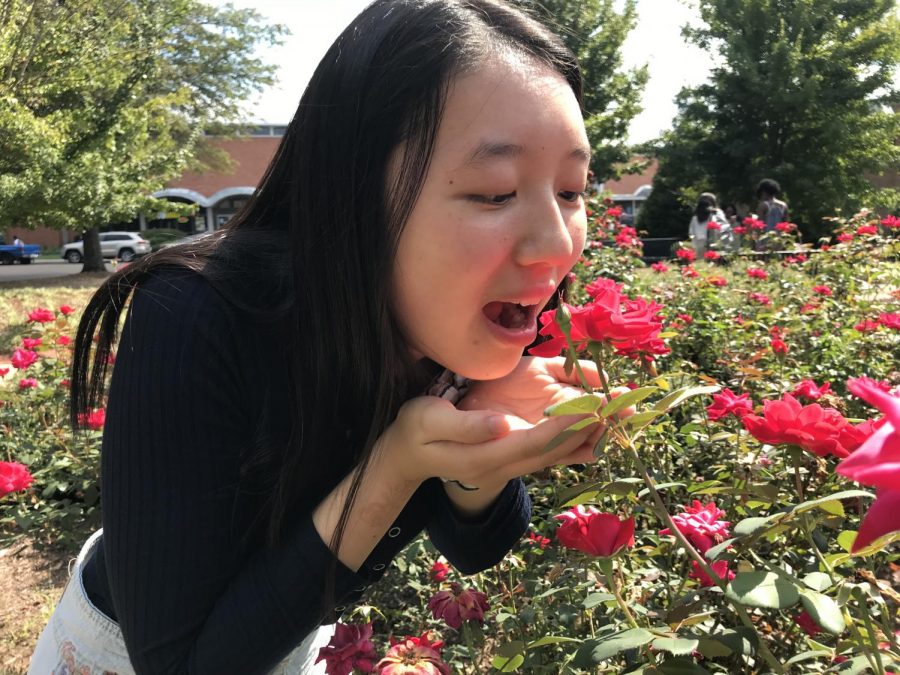 I realized as I was uploading this that I failed to take a feature photo, so enjoy this picture of me eating a flower?

It’s 2019, which means application season for the MSMS Class of 2021 is officially underway! (I’ve always thought, especially as a junior, how it’s a bit funny that MSMS starts recruiting barely after its current juniors have settled in, but perhaps it’s better to think about the yearly renewals in half of the student population as a unique perk.) To give you upcoming juniors a taste of what MSMS life is like—and how unique it can be!—for each one of us, The Vision has decided to start a Day in the Life series to hopefully answer some of your burning questions or just give you a more in-depth perspective of MSMS from the eyes of its students. And for those of you who are not potential applicants, this will attest to your questionable reading taste.

Today is Wednesday, which is also an A day for my classes:

It’s also an extra special day because I get to wake up bright and early at 7:30 to give a tour with Sarah and Lori.

We’re emissaries, which are like school ambassadors, and we’re assigned juniors to look after and help the recruit incoming class. Part of our job is giving campus tours for people who are interested in MSMS.

At MSMS, we have A days and B days, and even C days (but it stops there). A days are every Monday, Wednesday and Friday; B days are Tuesdays, and C days are Thursdays. On A days there are eight 55-minute long periods, while on B and C days there are five 1.467-hour long periods. There’s not much difference otherwise, except B and C days are usually reserved for “less necessary classes” and labs for the “necessary” classes (maths, sciences, and English) that occur on A days. Additionally, we distinguish between B and C days because some classes only meet once a week, like Journalism or Creative Writing.

The tour goes pretty smoothly, and at 8:50 I’m situated in my AP Physics C Electricity and Magnetism class, all psyched up to be educated about electric fields. If you’re worried about the blatant disregard for breakfast, The Most Important Meal of the Day, in my schedule, here’s a picture of the orange I’m eating as Dr. Vaughan prepares for the lecture:

Many of us don’t go to the cafeteria for breakfast because doing so takes an extraordinary amount of willpower, but I usually bring fruit or yogurt with me to class. Most teachers are usually pretty chill with us snacking in class, as long as we’re not disruptive.

Next is University English II, where we begin our discussion of “Paradise Lost” after Mrs. Richardson gives us a short pop quiz to strike fear into us by revealing how little we actually know after reading or not reading the text. After that, there’s Analytical Chemistry, which lets out like 40 minutes early (nothing short of a miracle, by the way). By now, I’m as hungry as a hippo and want to change out of my really itchy emissary polo, so I go back to my room, eat some of the food I brought from home and marvel at the dedication of bloggers and vloggers—because I’ve only been recording my life for a few hours and I’m already distraught by the amount of detail I have to go into.

I nap until I have to go to Painting, my last class of the day, where Mr. Snyder tells us: “I still don’t have supplies, so y’all are free to go.” Feeling extremely free but directionless, I sit in Hooper Lobby with the intention of doing some homework and play a few rounds of Google Quick Draw instead, then quickly spiral into the archive of related Google AI projects.

At 4:00, I decide to go to a presentation about Yale by Michelle Li (Yale ’20, MSMS ’16), since as a senior I suppose I can never have enough reminders that college is a very imminent and horrifying reality. I then hit up the cafeteria for a strange dinner of floppy pasta and really salty gravy. The cafeteria is usually not half-bad, but some days it’s a hit or miss. Especially since we just got back from break, none of us expect it to be good, because the MUW students (whose campus we’re on) aren’t back yet.

Science Bowl practice is at 6:00, which I tell myself I attend because it’s “fun.” And by fun, I mean depressingly humbling because every meeting is a reminder that I’ve retained no scientific knowledge despite going to a math and science school.

Blessedly, I “yeet” out of there at 6:45 to go to mock trial practice. This is probably the last year MSMS will have a mock trial team—or at least the last year Scott Colom, the district attorney, will coach it—but it’s basically like role-play courtroom. Team members play the parts of lawyers or witnesses. It’s a lot of dedication and a lot of fun when you’re well-practiced, which we are definitely not.

We don’t get back from practice until after 9:00. By now, I’m tired and peckish but too tired to make the weighty decision of what I should eat, so I just cuddle my roommate and listen to her rant about K-pop (yes, along with the world, K-pop has also taken over MSMS, and I wouldn’t be surprised if it turned out to be South Korea’s agenda for world domination).

Basically, I goof off until I decide I’ve goofed off enough and start getting ready for bed, delegating whatever homework that has not been finished to Future Victoria, who will no doubt have a better work ethic but greater workload, which she can always complete during her numerous free periods (oh, the ironies of procrastination). My bedtime is a closely guarded secret that should not be disclosed for the sole sake that it may or may not terrify the parents of prospective students.

Then, I just go to sleep, under the smoldering stares of at least 28 Korean boys.

It was a good day overall; I’m still getting back into the rhythm of things after winter break. To be perfectly honest, though, coming to MSMS was such a good decision, even though I rarely get as much sleep as I crave, even though there are about fifty lab reports I’d rather not have written, even though some days I miss home in the quiet of the mornings, but at the end of the day the opportunities and people here—and how much each of them cares—makes it so, so, so worth it.