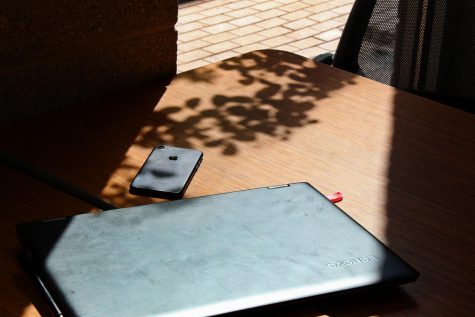 Apple and Lenovo Products are assembled in China before being sold in the US.

One experience that everyone can relate to is strolling down Walmart shelves looking at all the American made products and feeling patriotic because we are buying products built and shipped in the United States.

Oh wait. That isn’t the case at all.

“Approximately 80 percent of Walmart’s suppliers (are) still located in China” is a statistic by Americanmanufacturing.org and it doesn’t take much effort to corroborate that information. Those who are vigilant on the search for American made goods will often check the tags of shirts, toys and electronics, and be disappointed only to find the “Made in China” tag on many of them. It might seem unfair that China makes up most of our products that we use on a day to day basis, but money talks. Why would anyone spend more than they must to get a product with similar quality if they could save money and put the savings towards something else? China brings major economic competition to the United States, and it forces U.S. corporations to fight harder and come out with better products for consumers’ wallets.

This statement is especially true in the electronics sector of the market. More than $155 billion was spent by Americans on Chinese manufactured products, but soon, due to increasingly aggressive legislation and security threats, the U.S. might reduce those numbers by a significant margin.

That’s where the bulk of this argument comes into play. Is it ethical to limit consumer options in the economy and promote American monopolies like Apple?

The reasoning behind the effective money blockade stopping U.S. carriers like AT&T and Verizon from using Chinese products is simple: security concerns. Stated simply, the government fears potential spying through phone usage and other data collected by the device that is in our pockets every day. Stated complexly:

“Threats to national security posed by certain communications equipment providers are a matter of bipartisan concern. Hidden ‘back doors’ to our networks in routers, switches—and virtually any other type of telecommunications equipment—can provide an avenue for hostile governments to inject viruses, launch denial-of-service attacks, steal data, and more. Although the FCC alone can’t safeguard the integrity of our communications supply chain, we must and will play our part in a government- and industry-wide effort to protect the security of our networks.” – (Chairman Pai, FCC Statement, March 26, 2018)

What does this all mean?

It means that efforts to enter the American market by Chinese competitors like Huawei, ZTE, and Xiaomi have effectively been killed in the water before they even reach land.

In a partnership that was supposed to land last year in fact, Huawei was going to launch one of its smartphones that’s available worldwide (Mate 10 and Mate 10 Pro) on AT&T, but the deal fell through due to pressure from the U.S. Senate and House Intelligent committees and the FCC to drop it amid security concerns.

Though the security concerns have had no verifiable evidence presented to the public, consumer confidence in personal security has come to a decline.

Remember how there was a trend of people taping up their webcams because they felt uncomfortable with someone spying on them? There was one common underlying fact between the trends: it didn’t matter what computer product you had, or whatever manufacturer it came from, the hacking and spying were completely possible across all devices.

The moral of the story is that all devices are capable of being spied on, and the solution of Ajit Pai is ineffective at best considering personal privacy. In terms of government officials, the extra security measures may be necessary, but considering that every device present within the average consumer’s grasp is capable of being spied on, this only eliminates competition for big players like Apple and Samsung.

When you eliminate major competition, preventing international companies from challenging current U.S. based companies, in the end the consumer gets a more stagnated product and a more expensive one from the same company that has dominated the product space for more than a couple of years, thus creating a monopoly.

Another key point of fallacy is the fact that major companies like Apple source a majority of their labor and parts from China, so it would be hypocritical to look at Chinese company phones and expect them to harbor spyware and not hold iPhone’s, Samsung Galaxy’s and other brands dominating the market in America to the same security concerns.

Ultimately, the potential of a Chinese telecommunications ban is ineffective for several reasons, but still progressing like a speeding bullet train. If you try to control the products, you limit the growth potential of competitions in a mixed economic system. Spying vulnerabilities are in almost every device, so ruling out one group of products determined by its nation of assembly and origin of its Original Equipment Manufacturer (OEM) only ends up hurting the marketplace in the end.

The bottom line is this: it’s only limiting consumer choice, not really affecting personal consumer privacy.